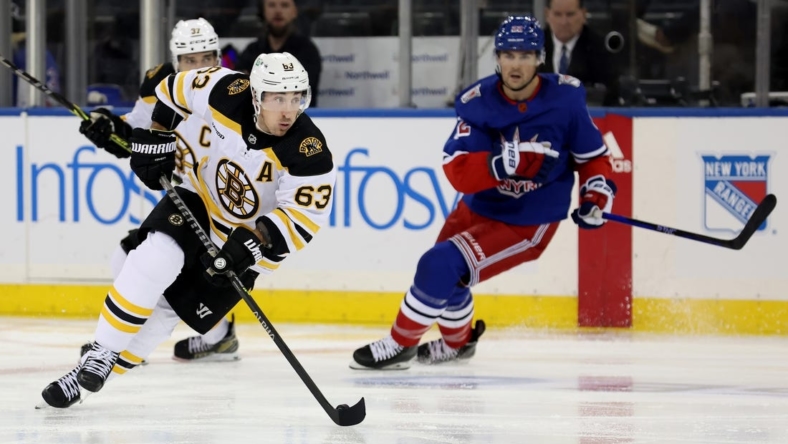 Trent Frederic scored the tiebreaking goal 6:04 into the third period as the visiting Boston Bruins continued their early-season surge with a 5-2 victory over the New York Rangers on Thursday night.

The Bruins improved their NHL-best record to 10-1-0 and won their seventh straight. It is Boston’s first seven-game winning streak since winning eight straight since early in the 2019-20 season and the first time it opened with 10 wins in 11 games.

Frederic netted the game-winner after getting into a second-period fight with New York’s Barclay Goodrow. David Pastrnak, Charlie Coyle, Jake DeBrusk and Hampus Lindholm also tallied for Boston. Linus Ullmark made 18 saves for the win.

The Rangers got goals from Jimmy Vesey and Adam Fox. Igor Shesterkin lost despite making 32 saves.

Jamie Benn had a goal and two assists as Dallas rolled over Arizona in Tempe, Ariz.

It was the highest-scoring game of the year for the Stars, who have won their past two games. Jason Robertson scored two goals while Roope Hintz had two assists. Denis Gurianov, Wyatt Johnston, Ty Dellandrea and Jani Hakanpaa scored the Stars’ other goals, and Scott Wedgewood stopped 28 of 30 shots.

Juuso Valimaki and Lawson Crouse scored for Arizona, after the Coyotes already were down 6-0 in the third period. Matias Maccelli assisted on both goals.

Ryan Graves and Jesper Bratt scored the tying and go-ahead goals seven seconds apart late in the third period to lift New Jersey over host Edmonton. The seven-second span was the fastest in which the Devils have scored twice.

Miles Wood had two goals and an assist for New Jersey. Vitek Vanecek, who entered in relief after Mackenzie Blackwood appeared to get injured in the second period, stopped 18 of 19 shots for the win. Connor McDavid, Derek Ryan and Leon Draisaitl scored for Edmonton, and Stuart Skinner made 39 saves.

Filip Forsberg and Matt Duchene each had a goal and assist, Kevin Lankinen made 29 saves and visiting Nashville beat Calgary to win for just the second time in nine games.

Forsberg scored 59 seconds into the second period and assisted on Roman Josi’s power-play goal 1:28 later. Meanwhile, ex-Flame Mark Jankowski scored in the first in his season debut and Duchene added an empty-netter for Nashville.

Jacob Markstrom stopped 28 of 31 shots for the Flames, who have dropped three consecutive games — all at home — after winning five of their first six. Calgary is 3-4-0 during an eight-game home stretch.

Anders Lee and Brock Nelson each scored a goal and earned an assist to lead visiting New York past slumping St. Louis.

Vladimir Tarasenko tallied a goal and an assist and Robert Thomas also scored for the Blues, who have lost six in a row. Jordan Binnington made 25 saves.

Rookie Andrei Kuzmenko recorded his first NHL hat trick and added an assist for Vancouver in a victory over visiting Anaheim.

Elias Pettersson tallied a goal and four assists, Bo Horvat notched two goals and an assist and Spencer Martin made 26 saves for the Canucks, who have won three of four following a seven-game losing streak to start the season.

Troy Terry had a goal and two assists, Ryan Strome and Trevor Zegras each chipped in a goal and an assist and John Gibson made 39 saves for the Ducks, who remain the only NHL team without a win in regulation this season.

Alex Wennberg scored twice and Martin Jones made 22 saves for his first shutout of the season and the 26th of his NHL career as Seattle won in Saint Paul, Minn.

Morgan Geekie and Jamie Oleksiak also scored and Daniel Sprong had two assists for the Kraken, who scored three times in the second and tied a franchise record with their third consecutive victory.

Marc-Andre Fleury stopped 19 of 23 shots for the Wild, who had a two-game winning streak snapped and lost in regulation for the second time in their past eight games (5-2-1).

Toews started the winning series by claiming a faceoff in his own end. He eventually carried into the zone, and Jake McCabe controlled a bouncing puck to the left of Jonathan Quick and slid a pass across the slot to Toews, who knocked it in.

Jason Dickinson also scored for the Blackhawks, who were 0-2-2 in their last four games. Chicago’s Arvid Soderblom made 32 saves. Blake Lizotte scored for the Kings, and Quick stopped 17 shots.

The Lightning’s Nikita Kucherov stretched his goal streak to five games and points streak to nine. Ross Colton and Nicholas Paul also scored, and Andrei Vasilevskiy made 52 saves as Tampa Bay lost for the first time in four games.

Alex Ovechkin tied Detroit legend Gordie Howe for the most all-time goals with one team, but the Red Wings defeated visiting Washington.

Dylan Larkin had a goal and an assist, and Lucas Raymond and Andrew Copp also scored for the Red Wings. Ville Husso made 33 saves for Detroit, which is 4-1-1 at home this season. Darcy Kuemper stopped 23 shots for the Capitals.

Pierre-Luc Dubois and Connor each had a goal and an assist and Blake Wheeler added a goal for Winnipeg, which won for the fourth time in five games. Connor Hellebuyck saved 20 shots.

Nick Suzuki notched a goal and an assist, Kirby Dach contributed a goal and Cole Caufield had two assists for the Canadiens, who lost their second game in a row. Sam Montembeault made 33 saves.

Sam Reinhart scored the only goal in a four-round shootout and Sergei Bobrovsky made 36 saves through regulation and overtime as Florida won at San Jose.

Erik Karlsson led the Sharks with a goal and two assists, but his shootout attempt missed when he hit the post. Matt Benning and Timo Meier had San Jose’s other goals, and James Reimer stopped 41 shots.

Mark Stone had a goal and an assist and Chandler Stephenson contributed a short-handed goal as Vegas edged host Ottawa.

The Golden Knights also received goals from William Carrier, Reilly Smith and Zach Whitecloud. Logan Thompson made 42 saves for Vegas, which has won 10 of its 12 games and notched its seventh consecutive victory over Ottawa.

The Senators received two goals apiece from Claude Giroux and Tim Stutzle. Anton Forsberg was lifted midway through the game after allowing five goals on 19 shots.