Boston’s Craig Smith took advantage of a momentary lapse from goalie Ilya Samsonov to score the winner 5:48 into the second overtime as the host Bruins defeated the Washington Capitals 3-2 in Game 3 of an East Division first-round series on Wednesday night.

Smith grabbed a loose puck behind the Capitals’ net and wrapped it around the left post and in before Samsonov could get back into position after stopping the puck’s momentum behind his goal. The goal gave the Bruins a 2-1 advantage in the best-of-seven series.

Taylor Hall and Brad Marchand each had a goal for the Bruins, who kept their momentum rolling after a 4-3 overtime win on the road in Game 2. Tuukka Rask made 35 saves for Boston.

Alex Ovechkin and Nic Dowd scored for the Capitals. Samsonov made his series debut in net after being activated from the COVID-19 list and made 40 saves. All three games in the series have been decided in overtime. 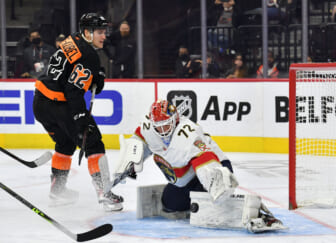 Dominic Toninato’s first playoff goal midway through the third period broke a tie and held up as the game-winner as visiting Winnipeg claimed a victory over Edmonton in their North Division first-round playoff series opener.

Kyle Connor and Blake Wheeler — who both had two-point games — and Tucker Poolman also scored for the Jets, while goaltender Connor Hellebuyck celebrated his 28th birthday by making 32 saves.

Jesse Puljujarvi replied with Edmonton’s lone goal and goaltender Mike Smith stopped 18 shots. The Oilers’ dynamic duo of Connor McDavid and Leon Draisaitl, who finished one-two in the league’s scoring race, were held without a point.

Alex Nedeljkovic made 32 saves and Carolina was constantly in penalty-killing mode in a victory against Nashville in Game 2 of its Central Division series in Raleigh, N.C.

The Hurricanes hold a 2-0 series lead, though they had to navigate numerous challenges after scoring on Sebastian Aho’s goal slightly more than eight minutes into the game. Aho also scored an empty-net goal with 52.1 seconds remaining, and Warren Foegele tacked on another with 28 seconds left.

The game proved to be a test of Carolina’s special teams, with the Hurricanes killing six penalties across the first two periods and seven for the game. Predators goalie Juuse Saros made 28 saves. Nashville has never won a playoff series after losing the opener, going 0-11 in those situations.

Mike Hoffman, Brayden Schenn and Sammy Blais had goals, Torey Krug had two assists and Jordan Binnington made 29 saves for the Blues. Several St. Louis players tested positive for COVID-19 and were in danger of missing the game, but the NHL said the tests were false positives. The players were retested, and the results were negative.

Matthew Tkachuk scored two goals and Brett Ritchie added another with two assists in a career-best three-point game as Calgary earned a home victory over Vancouver in the season finale for both teams.

Dillon Dube scored a goal in a two-point outing, and Andrew Mangiapane and Connor Mackey also scored for the Flames, who finished the season winning four of five games. Derek Ryan netted three assists for the Flames, who won seven of 10 meetings this season and finished fifth in the North Division.

Bo Horvat and J.T. Miller replied for the Canucks, who ended up as the last-place team in the North. Goalie Braden Holtby stopped 22 shots. 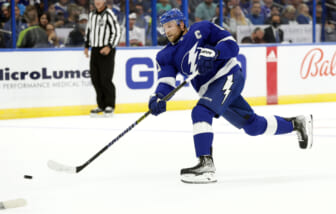