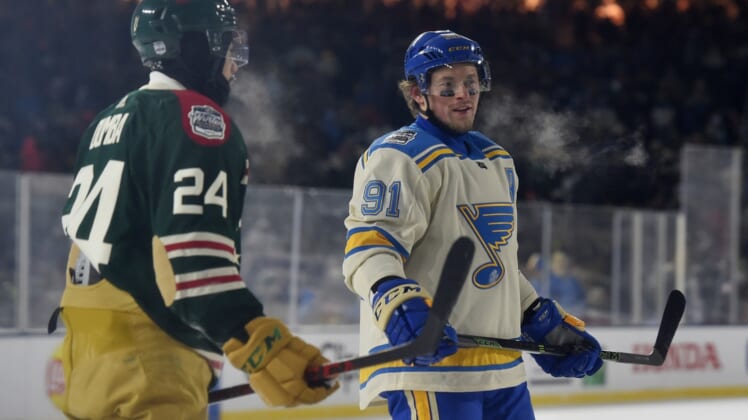 Jordan Kyrou collected two goals and two assists in the second period alone to lead the visiting St. Louis Blues to a 6-4 victory over the Minnesota Wild on Saturday at the Winter Classic before 38,619 at Target Field in frigid Minneapolis.

Kyrou is the first player in league history to record four points in an outdoor game. Ivan Barbashev collected one goal and one assist, while David Perron, Vladimir Tarasenko and Torey Krug also scored for the Blues, who are on a 7-1-1 roll.

Jordan Binnington made 29 saves in the chilly outdoor game that had a temperature of -5.7 degrees Fahrenheit at puck drop.

Kirill Kaprizov had a goal and two assists while Rem Pitlick, Ryan Hartman and Kevin Fiala also scored for the struggling Wild, who have lost five straight games. Goalie Cam Talbot stopped 22 shots through two periods before being replaced by Kaapo Kahkonen for the third period. He stopped all four shots he faced.

TJ Brodie had a goal and two assists and Justin Holl added a goal for the Maple Leafs, who had not played since Dec. 14 because of COVID-19 postponements. Alexander Kerfoot had three assists as Toronto won for the third straight game.

Campbell made 23 saves in picking up his eighth career shutout. Matt Murray made 34 saves for the Senators, who were playing their first game since Dec. 18. They have lost three straight. The game was played in an empty arena because of provincial COVID-19 restrictions.

Brady Skjei scored twice in a comeback from a four-goal deficit as Carolina rallied past host Columbus.

Steven Lorentz also scored twice, posting the first and sixth goals for the Hurricanes. They scored five goals in the third period. Nino Niederreiter, Ethan Bear and Andrei Svechnikov had the other goals, with Bear putting Carolina ahead with 9:50 remaining. Lorentz followed with his second goal just 69 seconds later.

Frederik Andersen stopped eight shots across the final two periods in relief of goalie Antti Raanta, who gave up three goals on nine shots in the first period just two days after posting a shutout of the Montreal Canadiens. Andersen also was credited with an assist on Niederreiter’s goal.

Charlie Coyle scored 34 seconds into overtime in his return from COVID-19 protocol to lift Boston over visiting Buffalo.

Craig Smith, Nick Foligno and Taylor Hall each scored for the Bruins in regulation. Linus Ullmark recorded 21 saves in net for Boston against his former team.

Vinnie Hinostroza and Jeff Skinner each scored for the Sabres in their return from COVID-19 protocol. Alex Tuch also scored for Buffalo, which has dropped three straight since resuming play on Dec. 29.

Sam Bennett scored two quick goals — each within the first 35 seconds of the first and third periods — as host Florida rallied to defeat Montreal in Sunrise, Fla.

The Panthers, who have the NHL’s best home record at 17-3-0, also got goals from Aleksander Barkov, Frank Vatrano and Mason Marchment.

Montreal got goals from Jonathan Drouin and Nick Suzuki. Former Panthers goalie Sam Montembeault made 43 saves, but it wasn’t enough to keep the Canadiens from losing their sixth consecutive road game.

Noah Dobson scored with 1:08 left in overtime to give host New York the win over Edmonton in Elmont, N.Y.

Dobson, who had just come off the bench, took a pass in stride from Mathew Barzal and fired a shot into the far corner of the net beyond Mikko Koskinen to give the Islanders their second straight win — the first time they’ve done that since Nov. 4-6.

Leon Draisaitl and Darnell Nurse scored for the Oilers, who lost in overtime for the second time in as many days and dropped their third straight overall.

Filip Forsberg and Ryan Johansen each had a goal and an assist, and Juuse Saros made 37 saves in the victory.

With Chicago’s top two goalies, Marc-Andre Fleury and Kevin Lankinen, both out of action due to COVID-19 protocols, goalie Collin Delia started an NHL game for the first time this season. It didn’t go well, as he was victimized for three first-period goals on seven shots before giving way to Arvid Soderblom the rest of the game. Soderblom stopped 15 of 18 shots in his NHL debut.