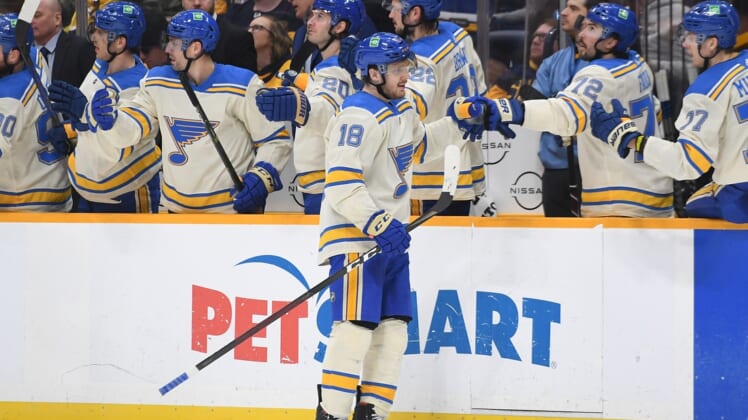 Robert Thomas scored his second goal of the game with 2:38 remaining in regulation to break a tie and the visiting St. Louis Blues bounced back after blowing an early three-goal lead to cool off the Nashville Predators 7-4 on Saturday.

Jordan Kyrou’s third assist of the day was a brilliant pass that found Thomas, who easily beat Nashville’s Juuse Saros (28 saves) to snap a 4-4 tie. David Perron, who scored twice and has seven goals in six games, and Justin Faulk added empty-netters as the Blues won back-to-back games following an 0-3-1 slide.

Thomas, who also had two assists, has scored twice in back-to-back contests.

Matt Duchene recorded his fourth two-goal game in the last five and added an assist, while Ryan Johansen scored once and had two assists for the Predators, who were roughed up after outscoring their opponents 14-2 to win the previous three games.

Connor McDavid scored two goals, and Leon Draisaitl and Kailer Yamamoto each had a goal and an assist to lead host Edmonton past Tampa Bay, which has lost three straight regulation games for the first time this season.

Mikko Koskinen made 31 saves and Tyson Barrie added two assists for Edmonton, which moved into a tie for third place in the Pacific Division. McDavid moved past Florida’s Jonathan Huberdeau (82) into the NHL scoring lead with 83 points.

Zach Bogosian scored a goal and Brian Elliott stopped 45 of 48 shots for Tampa Bay. The contest marked the Lightning’s first game at Rogers Place since capturing the first of two consecutive Stanley Cups with a win over the Dallas Stars on Sept. 28, 2020.

Jordan Martinook scored the go-ahead goal with 3:50 remaining in the third period and Carolina defeated Philadelphia in Raleigh, N.C.

Martinook had gone 17 games without scoring before breaking a 1-1 tie by beating Martin Jones for his third goal of the season, putting Carolina ahead to stay in a matchup between the first-place and last-place teams in the Metropolitan Division. Frederik Andersen made 28 saves for his 30th win of the season.

Jones made 33 saves and Derick Brassard scored for the Flyers, who lost their 11th straight road game (0-9-2).

Philipp Grubauer made 30 saves and didn’t allow a score in a seven-round shootout as Seattle defeated host Montreal, sweeping the season series.

Marcus Johansson had two assists and scored the shootout winner on a backhander for Seattle, which snapped an eight-game road losing streak. Yanni Gourde, Ryan Donato and Jared McCann tallied in regulation for the Kraken.

Michael Pezzetta, Alexander Romanov and Nick Suzuki scored for Montreal, which lost its second in a row, and Sam Montembeault made 32 saves. The Canadiens were playing in front of a full house at the Bell Centre for the first time this calendar year after coronavirus restrictions were lifted.

Charlie Coyle scored the go-ahead goal with 3:21 left and also had an assist to lead host Boston past Arizona.

Coyle rushed up the ice on a two-on-one break with Craig Smith, who scored Boston’s first two goals, and backhanded a shot from the left circle inside the near post for his 14th goal of the season and the game winner.

Jeremy Swayman made 27 saves as the Bruins improved to 9-1-1 in their last 11 games. Clayton Keller scored his 25th goal of the season and Nick Ritchie also scored for Arizona, which had its season-best four-game win streak snapped. Karel Vejmelka finished with 37 saves.

Chicago outscored Ottawa 6-1 over the final two periods to back a 20-save effort from goaltender Marc-Andre Fleury.

The spurt included Jones’ first career multi-goal game and featured a tally in which Jones’ brother, Seth, notched one of his two assists. Patrick Kane had three assists and Jake McCabe added two.

Tomas Tatar scored in regulation and again in the shootout to lift New Jersey over Anaheim in Newark, N.J.

Nico Daws made 33 saves and stopped both attempts in the shootout for the Devils, who have won three of their last four.

Troy Terry scored, and Anthony Stolarz made 39 saves for the Ducks, who have lost the first three games of their five-game road trip.

Jacob Markstrom made 19 saves to record his league-leading ninth shutout of the season and help lead Calgary to a home win over Detroit.

Elias Lindholm, Tyler Toffoli and Blake Coleman each scored for Calgary, which has won four of its last five games and carried the play throughout. Calgary outshot Detroit 43-19.

Red Wings goalie Thomas Greiss did his best to keep Detroit in the game, making 40 saves. The Red Wings have lost five games in a row and seven of eight.

Greg McKegg, Mika Zibanejad, Adam Fox, Patrik Nemeth, Barclay Goodrow and Ryan Strome all scored for the Rangers, who split a four-game road trip after trailing 2-0 in the first 4:53 on Saturday. Igor Shesterkin settled down from the rough start and made 29 saves.

Esa Lindell and Tyler Seguin scored in the first period for Dallas. Jason Robertson scored his 30th goal and Joe Pavelski tallied for the Stars, who allowed more than three goals for the first time in 13 games. Dallas goalie Jake Oettinger allowed a career-worst six goals on 28 shots.

Sharks goalie Adin Hill made 29 saves — his first action in nearly two months — for his second shutout of the season. Matt Nieto and Jonathan Dahlen also scored while Nick Bonino had two assists for the Sharks, who snapped an 0-2-1 rut with Thursday’s 4-3 overtime win at Los Angeles.

Cal Petersen was roughed up early, allowing three first-period goals, and finished with 22 saves for the Kings, who have dropped back-to-back games after winning eight of 10.