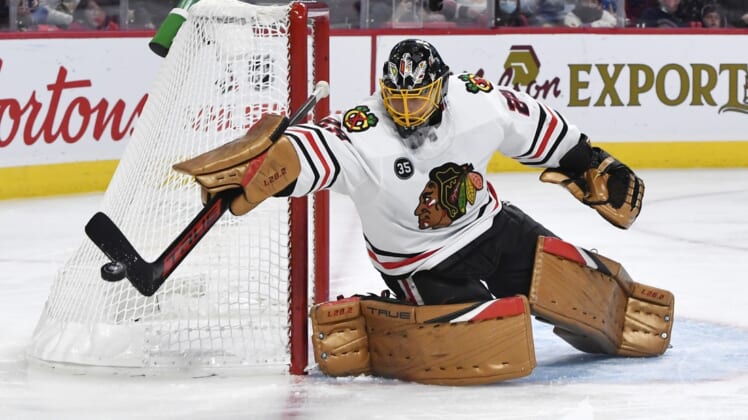 Dec 9, 2021; Montreal, Quebec, CAN; Chicago Blackhawks goalie Marc-Andre Fleury (29) makes a save and redirects the puck during the second period against the Montreal Canadiens at the Bell Centre. Mandatory Credit: Eric Bolte-USA TODAY Sports

Marc-Andre Fleury turned aside all 30 shots he faced to record his 500th career NHL win on Thursday, lifting the visiting Chicago Blackhawks to a 2-0 victory over the Montreal Canadiens.

The reigning Vezina Trophy recipient recorded his seventh victory in his last 10 outings to join Hall of Famers Martin Brodeur (691) and Patrick Roy (551) as the only NHL goaltenders to reach the 500-win plateau.

Fleury was born in Sorel, Quebec, approximately one hour north of Montreal. He gave the “home” fans a show by stopping all 12 shots he faced in the third period to secure his second shutout of the season and 69th of his career.

Captain Jonathan Toews scored his first goal of the season and Henrik Borgstrom also tallied for the Blackhawks, who have won seven in a row in Montreal.

Jake Allen made 23 saves for the Canadiens, who matched a season high with five straight losses (0-4-1). Montreal began the season by losing its first five games.

Trevor Zegras and Rickard Rakell scored in the shootout to lift visiting Anaheim over Columbus.

Isac Lundestrom scored in regulation, and John Gibson made 33 saves for the Ducks, who are 2-0-1 on their five-game road trip.

Alexandre Texier scored, and Elvis Merzlikins made 25 saves for the Blue Jackets, who have lost six of their past seven.

Quick was solid all night, and stellar when needed, in recording his second shutout of the season for the Kings, who totaled 41 shots. Kempe’s goal early in the second period, Arthur Kaliyev’s fifth of the season late in the third and empty-netters from Viktor Arvidsson and Andreas Athanasiou were more than enough for Los Angeles to end a six-game home losing streak to the Stars.

Jake Oettinger made 37 saves for the Stars, who failed to rebound after their club-tying seven-game winning streak ended Wednesday in a 5-4 loss at Vegas. Blanked for the first time this season, Dallas has dropped back-to-back games for the first time since Nov. 7 and 10.

Ondrej Palat had two goals and an assist, Steven Stamkos had a goal and three assists as visiting Tampa Bay defeated Toronto.

Taylor Raddysh added a goal and an assist for the Lightning, who have won five straight. Pierre-Edouard Bellemare also scored, Alex Killorn added two assists and Andrei Vasilevskiy made 35 saves as coach Jon Cooper got his 400th career win.

Eeli Tolvanen scored with 11.5 seconds left in the third period for visiting Nashville, which overcame a late deficit to edge New York.

Ryan Johansen and Colton Sissons scored in the first period and Yakov Trenin scored the tying goal with 7:29 left for the Predators, who have won three straight and four of five. Goalie David Rittich made 18 saves.

Austin Czarnik, Anders Lee and Noah Dobson scored for the Islanders, whose point streak ended at four games. Their losing streak at UBS Arena hit seven games (0-5-2) — the longest arena-opening losing streak by a team at its new home in NHL history.

Sebastian Aho scored both goals, including the overtime winner, to lead visiting Carolina to a victory over Calgary.

Goaltender Frederik Andersen made 26 saves for the Hurricanes, who are riding a three-game winning streak. Aho is now riding a four-game point streak in which he’s collected three goals and nine points.

Noah Hanifin replied for the Flames, who have lost three straight games — the first two in regulation time — but likely deserved a better fate on this night. Goalie Jacob Markstrom stopped 24 shots.

Nathan Walker had a hat trick in his season debut and host St. Louis defeated the Red Wings.

Walker had only three career goals prior to his outburst. St. Louis played with only 17 skaters due to health and safety protocols and injuries. The Blues called up Walker from Springfield of the American Hockey League on Wednesday due to their roster issues.

Colton Parayko, Ivan Barbashev and Marco Scandella also scored for the Blues, and Charlie Lindgren made 29 saves. Robby Fabbri scored both of the Red Wings’ goals.

Matt Grzelcyk’s first goal of the season with 2:33 remaining in the third period lifted Boston to a win over host Edmonton.

Grzelcyk unleashed a slap shot from the top of the right circle to beat Oilers goalie Stuart Skinner low stick-side. It was the defenseman’s first goal since Game 4 of the Bruins’ first-round playoff series against Washington last May 21.

Brad Marchand added his team-leading 10th goal of the season and Jake DeBrusk also scored for Boston. Linus Ullmark made 41 saves for the Bruins, who had lost two straight and five of their last eight games (3-3-2).

Kyle Connor scored twice, and Connor Hellebuyck made 25 saves for his first shutout of the season and the 25th of his career as Winnipeg defeated the host Kraken.

Dominic Toninato also scored for the Jets, who won for the third time in their past four games. Connor’s two goals gave him 17 for the season, tied for third in the National Hockey League behind Edmonton’s Leon Draisaitl (23) and Washington’s Alex Ovechkin (20).

Seattle goaltender Philipp Grubauer stopped 30 of 33 shots. The expansion Kraken lost their second in a row following a 5-1-1 stretch.

Cam Talbot made 33 saves and Jordan Greenway had two goals as Minnesota extended their winning streak with a road victory over San Jose Sharks.

Minnesota won for the eighth consecutive game, marking the third-longest win streak in franchise history. Kevin Fiala, Joel Eriksson Ek and Kirill Kaprizov each had a goal and an assist for the Wild.

Jonathan Dahlien and Tomas Hertl each had a goal and an assist during a dominant third period for the Sharks, who outshot Minnesota by a 19-9 margin in the final frame.