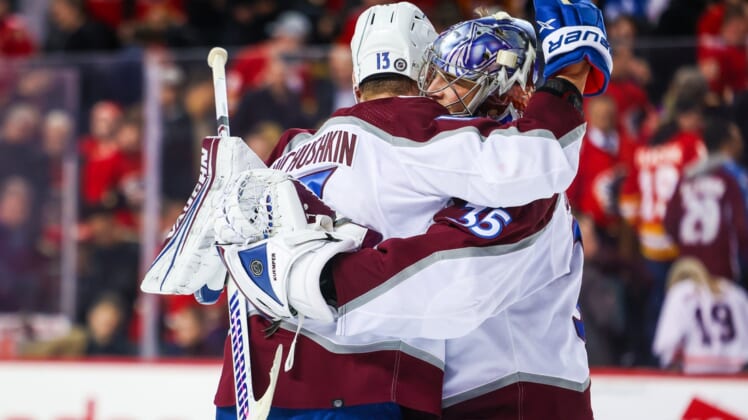 Valeri Nichushkin scored both goals on the power play to lead the Colorado Avalanche to a 2-1 road victory over the Calgary Flames in a clash between the Western Conference’s top teams on Tuesday.

The Central Division-leading Avalanche are the first team this season to reach 100 points. Colorado is 12 points ahead of Calgary.

Devon Toews collected two assists and goaltender Darcy Kuemper made 44 saves for the Avalanche, who found out in the morning they would be without star forward Nathan MacKinnon due to an upper-body injury sustained in the previous outing. The Avalanche are also missing a handful of other key players, including captain Gabriel Landeskog.

Tyler Toffoli scored for the Pacific Division-leading Flames, who received a 28-save outing from Jacob Markstrom.

Jonathan Huberdeau scored the go-ahead goal in the third period as Florida beat Montreal in Sunrise, Fla. The Panthers earned their league-leading 27th home win of the season, tying the franchise record for home victories set in 2017-18.

Huberdeau also scored short-handed earlier in the game, and he had his 70th assist, tying the NHL record for assists by a left winger. Ryan Lomberg produced his first career two-goal game and added an assist, and the Panthers got one goal and two assists from Sam Bennett, a goal and an assist from Aleksander Barkov and a goal from Mason Marchment.

Montreal got a goal and an assist apiece from Chris Wideman and Laurent Dauphin, and Joel Edmundson and Christian Dvorak also scored. Jake Allen stopped 39 shots.

Steven Stamkos scored Tampa Bay’s third power-play goal 52 seconds into overtime as the Lightning topped Carolina for their third straight win and improved to 20-6-4 at home.

Rookie Seth Jarvis scored and had an assist for Carolina, and Nino Niederreiter and Sebastian Aho also found the net.

Chris Kreider’s power-play goal early in the third period held up as the deciding marker for visiting New York in a win over Pittsburgh.

The game was a rematch of Friday’s 5-1 Rangers win in New York, and the victory allowed the Rangers to leapfrog the Penguins into second place in the Metropolitan Division. Artemi Panarin added two assists for the Rangers, who have won three straight and five of six.

Brian Boyle and Sidney Crosby scored for the Penguins, who are 1-2-1 in their past four. Pittsburgh goaltender Tristan Jarry stopped 23 shots.

Visiting Toronto scored three goals in each of the first two periods on the way to a win over Boston.

Toronto earned its second straight victory and snapped Boston’s four-game winning streak. Mitchell Marner, Auston Matthews and Morgan Rielly all had a goal and an assist. Rookie Erik Kallgren made 23 saves for Toronto after replacing Petr Mrazek in the first period. Mrazek, who made three saves on four shots, left with a groin injury.

Joel Eriksson Ek and Frederick Gaudreau each notched two assists for the Wild, who won their seventh game in a row. Marc-Andre Fleury stopped 32 of 33 shots to win his second straight game since joining Minnesota.

Morgan Frost scored the lone goal for the Flyers, who have lost four of their past five games. Philadelphia’s Martin Jones allowed four goals on 37 shots.

Brock Nelson scored to begin a stretch of four unanswered goals by visiting New York, which hung on to edge Columbus.

Josh Bailey, Anthony Beauvillier and Zach Parise also scored for the Islanders, who scored all their goals in a span of 17-plus minutes bridging the first two periods. Semyon Varlamov made 42 saves as New York snapped a two-game losing streak.

Vladislav Gavrikov scored twice and Oliver Bjorkstrand had a goal for the Blue Jackets, who have lost four straight (0-2-2). Elvis Merzlikins recorded 25 saves.

The Predators got Tanner Jeannot’s NHL rookie-leading 23rd goal in the third and Matt Duchene’s empty-netter to build more playoff momentum with a ninth win in 13 games. Nashville also matched a season high with its fourth straight home victory.

Ottawa’s Brady Tkachuk set a career high with his 23rd goal early in the first period and Anton Forsberg made 28 saves, but the visitors went 1-for-6 on the power play and Saros was solid the rest of the night.