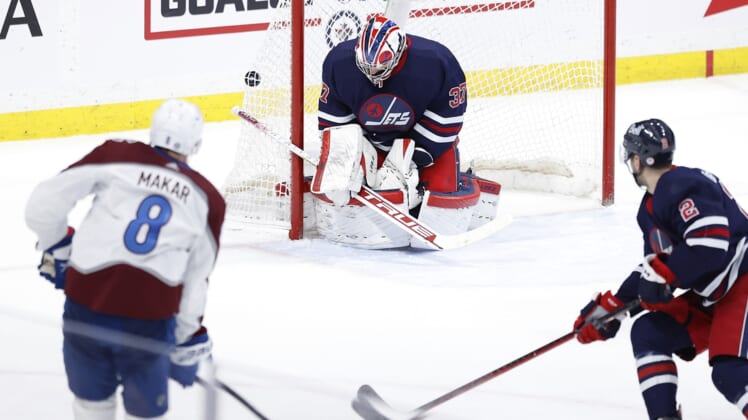 Cale Makar scored the winning goal in overtime to cap a two-point game, giving the league-leading Colorado Avalanche their fifth straight win with a 5-4 road victory over the Winnipeg Jets on Friday.

Andre Burakovsky and Nathan McKinnon also collected one goal and one assist, while Nicolas Aube-Kubel and Erik Johnson each scored once for the Avalanche. Goaltender Pavel Francouz made 39 saves.

With Winnipeg’s Nikolaj Ehlers in the penalty box, Makar blasted a one-timer for the power-play tally at 2:42 of the overtime period for his 25th goal of the season, and a thrilling finish to a wild affair.

Ehlers and Mark Scheifele both scored twice as part of three-point games for the Jets, who are on a four-game losing skid with their playoff hopes hanging in the balance. Goalie Connor Hellebuyck stopped 32 shots on a night his team erased a late two-goal deficit to force overtime.

Robert Thomas scored 1:27 into overtime and St. Louis moved into a tie for second place in the Central Division with Minnesota with a come-from-behind victory.

Thomas, who also had an assist, one-timed a Vladimir Tarasenko pass from the bottom of the left circle into the top left corner for his 17th goal of the season.

Justin Faulk had a goal and an assist, and Pavel Buchnevich and Brayden Schenn also scored for St. Louis, which extended its point streak to seven games (6-0-1). Kirill Kaprizov, Kevin Fiala and Jacob Middleton scored goals for Minnesota, which blew a 3-1 third-period lead. Cam Talbot finished with 24 saves for the Wild, who still have one game in hand on the Blues.

Jake DeBrusk initially set up Coyle at the doorstep, but the puck squirted behind the net. DeBrusk, however, made a play with his body on Tampa Bay’s Brayden Point, allowing Coyle to regain possession and beat Andrei Vasilevskiy for his 16th goal of the season and his second in overtime.

DeBrusk also scored his seventh goal in his last seven games for the Bruins, who improved to 18-4-1 in their last 23 contests and moved into sole possession of third place in the Atlantic Division. Pierre-Edouard Bellemare scored a goal and Vasilevskiy turned aside 35 shots for the Lightning, who have lost a season-high four in a row (0-2-2).

Sam Bennett scored with 38 seconds remaining in the third period to give Florida its sixth straight win, a victory over visiting Buffalo.

Sam Reinhart and Claude Giroux each had a goal and an assist, and Barkov and Brandon Montour each had two assists for the Panthers. Sergei Bobrovsky made 19 saves.

Dustin Tokarski made 39 saves for the Sabres, who have lost two straight in regulation for the first time since March 6-7.

Kyle Palmieri scored with 14.1 seconds left in the third period to lift New York to a win against Carolina in Raleigh, N.C.

Vincent Trocheck scored the tying goal with 57 seconds left, and Frederik Andersen made 19 saves for Carolina, which lost for the third time in four games and was unable to add to its two-point lead over the New York Rangers for first place in the Metropolitan Division.

Trocheck prevented Sorokin’s seventh shutout of the season when he scored with Andersen pulled for the extra skater. Palmieri then came out from behind the net and scored the game-winner less than a minute later, lifting New York to its fifth win in six games.