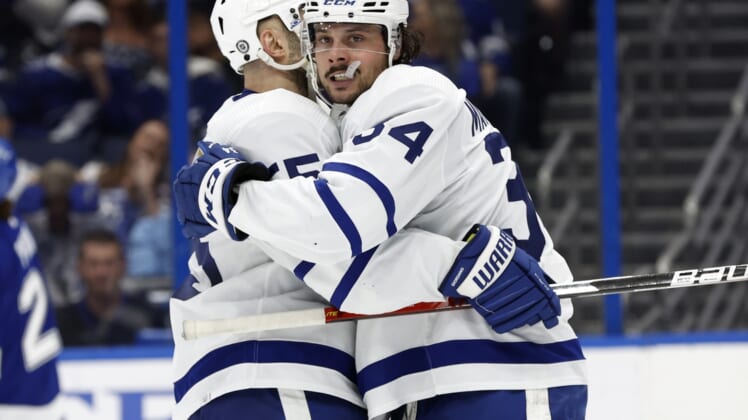 Matthews scored twice in the second period and once in the third to match Rick Vaive’s goal-scoring mark from the 1981-82 season. Toronto’s Mitchell Marner had a goal and two assists to stretch his point streak to 10 games (six goals, 16 assists).

Matthews produced a four-point outing for the Maple Leafs, who won their fifth straight game and broke a tie with Tampa Bay for second place in the Atlantic Division.

Jake DeBrusk scored his second goal of the game at 1:03 of overtime to lift visiting Boston to a win against Columbus.

DeBrusk scored from the bottom of the right circle off a feed from Hampus Lindholm. Charlie McAvoy extended his point streak to five games with two assists for the Bruins, who have won three straight and are 12-2-1 in their past 15 games. Boston’s Craig Smith also scored, and Linus Ullmark made 20 saves for the win.

Emil Bemstrom and Zach Werenski scored, Jakub Voracek had two assists and Elvis Merzlikins made 34 saves for the Blue Jackets, who are 0-4-3 in their past seven games.

Pavel Buchnevich had a goal and two assists for the Blues, who have gone 4-0-1 in their past five games. Ivan Barbashev and Brayden Schenn also scored and David Perron and Robert Thomas each had two assists.

Nick Schmaltz scored and Ivan Prosvetov made 24 saves for the injury-depleted Coyotes, who are 2-7-1 in their past 10 games.