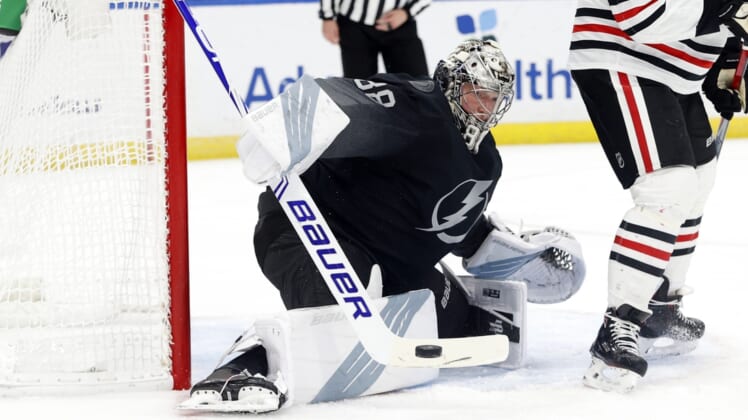 Andrei Vasilevskiy made 30 saves to tie a franchise high with his 11th straight win in the Tampa Bay Lightning’s 4-1 victory over the visiting Chicago Blackhawks on Saturday afternoon.

Vasilevskiy, who improved to 10-0-0 in his career against the Blackhawks, tied former teammate Louis Domingue for the consecutive-wins record set two seasons ago. The Lightning’s 22nd win put them one better than the Vegas Golden Knights for the league lead.

Tampa Bay received a power-play goal and an assist from captain Steven Stamkos, along with goals from Brayden Point, Anthony Cirelli and Yanni Gourde. During the Lightning’s three-goal second period, defenseman Victor Hedman had three assists.

Alex DeBrincat scored at 4:50 of the third period to break the shutout, and Malcolm Subban stopped 25 of 29 shots for Chicago, went 0-for-4 on the power play.

The Rangers avenged Friday’s 2-1 loss to the Capitals and improved to 3-1-1 in their last five games thanks to an outstanding defensive play and a finish by Zibanejad, who also had an assist.

Defenseman John Carlson scored the lone goal for Washington, which lost for only the second time in their past 15 games (12-2-1).

Tomas Tatar scored in regulation and had the decisive goal in the sixth round of the shootout, as host Montreal won for the seventh time in eight games, cooling off sizzling Vancouver.

After Montreal’s Brendan Gallagher tied the game early in the third period, the Canadiens eventually prevailed when Tatar beat Vancouver’s Braden Holtby, who made 36 saves in his first start since March 2, deep into the shootout. The Canadiens’ Corey Perry and the Canucks’ Brock Boeser scored in the first round of the shootout.

Barkov has five goals in his past five games, and Driedger had 21 saves. Driedger’s only other career shutout was in his first game with the Panthers on Nov. 30, 2019, also against Nashville.

The Panthers’ win overshadowed another brilliant performance by Predators goalie Juuse Saros, who tied a career high with 47 saves. Saros, who made 40 saves to beat the Panthers, 2-1, on Thursday, has allowed two goals or fewer in five straight starts.

Captain Gabriel Landeskog collected a goal and two assists and Philipp Grubauer made 31 saves for his NHL-best fifth shutout this season to fuel Colorado over Minnesota in Denver.

Cale Makar had a goal and an assist and fellow defenseman Devon Toews joined Mikko Rantanen, Tyson Jost and Valeri Nichushkin in scoring a goal. Nathan MacKinnon had three assists and Ryan Graves and Joonas Donskoi set up two goals apiece for Colorado.

Oliver Bjorkstrand scored in regulation and netted the winner in the shootout as Columbus defeated host Carolina in Raleigh, N.C.

Carolina’s Dougie Hamilton scored in the first round of the shootout, but the Blue Jackets’ Patrik Laine tied it with the final shot in the third round to send it to extra frames.

Jason Spezza scored a first-period goal and Jack Campbell finished off his second shutout of the season as Toronto defeated visiting Calgary.

Zach Hyman also scored for the Maple Leafs, who won for only the second time in eight games and ended a three-game losing streak.

The teams split the two-game set as the Flames lost for the second time in the past six games under new coach Darryl Sutter, who is 4-3-1 overall. Toronto has won four of the six games between the teams this season.

Jake Guentzel had a goal and an assist and Sidney Crosby had two assists as visiting Pittsburgh topped New Jersey in Newark, N.J.

Pittsburgh, which spotted New Jersey a one-goal lead, had lost two straight and avoided its first three-game skid of the season. The Devils had won two straight, but instead picked up their 10th loss in 13 games (3-8-2).

Zach Aston-Reese also scored for the Penguins. Goaltender Casey DeSmith, who has allowed two goals or fewer in each of his past five starts, made 24 saves. Kyle Palmieri scored for New Jersey and Scott Wedgewood made 26 saves.

Casey Cizikas scored twice in a four-goal first period and host New York cruised to a victory over Philadelphia.

Jean-Gabriel Pageau and Jordan Eberle also scored in the first while Anthony Beauvillier and Josh Bailey scored in the third for the Islanders, who snapped a two-game losing streak. Rookie Ilya Sorokin made 23 saves as he won his seventh straight start.

Thomas Hickey, appearing in his first NHL game since May 3, 2019, had two assists.

Kero’s goal was his first in the NHL since Nov. 12, 2017, when he played for the Chicago Blackhawks. Andrej Sekera and Ty Dellandrea had the other goals for Dallas. Khudobin made 21 saves in his 11th career shutout.

Dallas avenged a 3-2 loss to the Red Wings on Thursday. Detroit was shut out for the fourth time this season.

Connor McDavid and Darnell Nurse each had a goal and an assist, and Leon Draisaitl scored what proved to be the winning goal midway through the third period as Edmonton rallied from an early two-goal deficit to defeat visiting Winnipeg.

The Oilers won their third straight game and moved back into a first-place tie with Toronto in the North Division. McDavid extended his point streak to nine games, scoring his 21st goal of the season to move into a tie for the league lead with Auston Matthews of the Maple Leafs.

Pierre-Luc Dubois had a goal and an assist and Andrew Copp also scored for Winnipeg, which has lost back-to-back games in regulation for the first time this season. Nikolaj Ehlers had two assists for the Jets, and Connor Hellebuyck made 33 saves.

Jordan Kyrou scored two goals and added an assist to lead St. Louis past San Jose and finish the season series between the teams at 5-1-2.

David Perron and Ryan O’Reilly each had a goal and three assists for Blues. Vince Dunn added a goal and assist, and Ville Husso made 29 saves.

Dylan Gambrell and Tomas Hertl scored for the Sharks, who are winless in their last four games (0-3-1). Devan Dubnyk made 16 saves.

Jakob Chychrun, who posted a two-point game, and Clayton Keller also scored for the Coyotes, who ended a disappointing road trip by snapping a five-game winless skid. Goaltender Antti Raanta made 27 saves in the win.

Adam Henrique scored the lone goal for the Ducks, who sit at the bottom of the West Division standings and have just one win in their last six games — an overtime victory over Arizona in the first half of this two-game set.

Ducks goaltender Ryan Miller was the victim of three goals on 14 first-period shots before Anthony Stolarz replaced him and stopped 12 shots in relief.