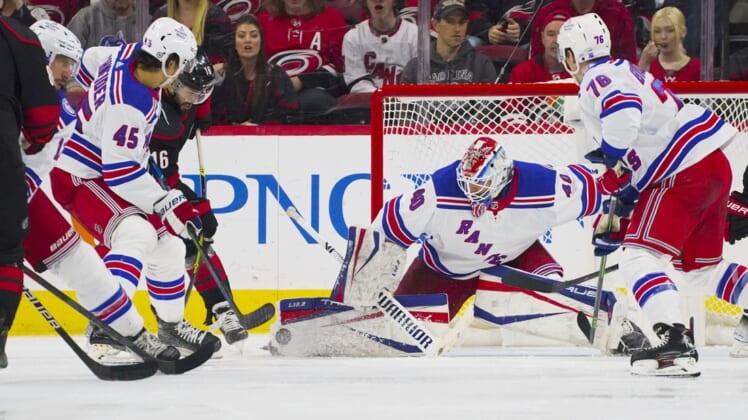 Alexandar Georgiev made 44 saves for his first shutout of the season as the New York Rangers beat the Carolina Hurricanes 2-0 on Sunday night in Raleigh, N.C.

Chris Kreider scored in the second period and Frank Vatrano had an empty-net tally with 41.3 seconds to play for the Rangers.

Hurricanes goalie Frederik Andersen made 16 saves, but Carolina now has its first four-game losing streak of the season. It is 0-3-1 during that stretch.

Sunday marked Georgiev’s seventh career shutout. It had been more than a year — March 17, 2021 — since his last one.

Roope Hintz scored two goals for visiting Dallas in a win against Washington.

Alexander Radulov also scored, and Jake Oettinger made 36 saves in his second start in two days for the Stars, who had lost four of their previous five games.

Alex Ovechkin scored his 40th goal of the season for Washington, which was the 12th time Ovechkin has scored at least 40 goals in his NHL career, tying Wayne Gretzky for the NHL record. But the Capitals were denied in trying to win five in a row for the first time this season.

Kevin Hayes scored two goals in the second period to lift host Philadelphia to a victory over New York.

Joel Farabee and Travis Konecny each added two assists and Carter Hart made 26 saves for the Flyers, who defeated the Islanders for the first time in four games this season. Philadelphia played its second straight game without captain Claude Giroux, who was traded to the Florida Panthers on Saturday.

Casey Cizikas scored the lone goal and Ilya Sorokin turned aside 35 shots for the Islanders, who had their two-game winning streak snapped.

Jansen Harkins scored twice to fuel a flurry of four straight second-period goals and Kyle Connor had a goal and three assists to boost visiting Winnipeg to a victory against Chicago.

Dylan Strome and Taylor Raddysh — a recent acquisition from Tampa Bay in Friday’s trade for Brandon Hagel — had a goal and an assist for Chicago, and Patrick Kane had two assists.

Rasmus Dahlin scored 48 seconds into overtime to lift Buffalo over host Vancouver for its fourth win in five games.

Dahlin took a pass from Alex Tuch along the wall and cut to the slot, going five-hole on Thatcher Demko. Casey Mittelstadt had a goal and an assist and Jeff Skinner also scored for the Sabres. Craig Anderson made 30 saves.

J.T. Miller had a goal and an assist, Bo Horvat also scored and Demko made 26 saves for the Canucks, who lost their third straight and are 1-3-2 in their past six.

Nick Bonino and Rudolfs Balcers also scored for San Jose. Gregor also had an assist while James Reimer made 23 saves. Phil Kessel and Crouse each had a goal and an assist for Arizona, and Karel Vejmelka finished with 25 saves.