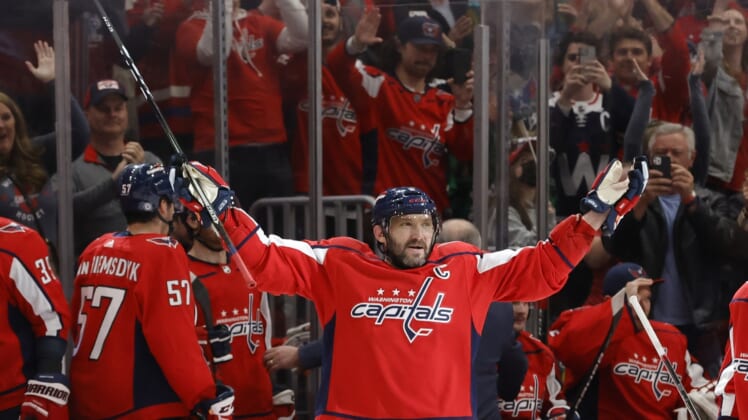 Alex Ovechkin’s 767th goal moved him into sole possession of third place on the NHL’s all-time scoring list, and the Washington Capitals won in the shootout round for a 4-3 victory over the visiting New York Islanders on Tuesday.

With the score tied 2-2 at 15:02 of the third period, Evgeny Kuznetsov won a faceoff in New York’s end and quickly sent the puck to Ovechkin at the edge of the circle. The star forward blasted the shot past goalie Semyon Varlamov for his 37th goal of the season and his latest mark in the record books.

Only Wayne Gretzky (894 goals) and Gordie Howe (801) sit ahead of Ovechkin on the NHL’s all-time list. Ovechkin had spent the last three games in a tie with Jaromir Jagr at the 766-goal mark.

Frank Vatrano scored two goals, including the winner just over a minute into overtime, as visiting Florida rallied to beat San Jose.

Jonathan Huberdeau also scored for the Panthers and Spencer Knight had 24 saves as Florida improved to 1-1-0 at the start of a season-long seven game road trip. The Panthers had won five consecutive games before hitting the road.

Logan Couture and Nicolas Meloche each scored first-period goals for the Sharks.

Matt Grzelcyk scored the winning goal at 1:40 of overtime to lift Boston over host Chicago — the Bruins’ third straight win and 10th in 12 games.

Patrice Bergeron scored the opening goal for Boston, which had a 48-20 advantage in shots on goal. The edge was 35-11 after two scoreless periods. Taylor Hall finished the night with two assists and Linus Ullmark made 19 saves.

Marc-Andre Fleury stole a point for Chicago by making 46 saves, one shy of his career high. The Blackhawks had won two of their previous three games.

Kyle Connor had a goal and two assists as host Winnipeg closed to within two points of Vegas for the final playoff spot in the Western Conference.

Mark Scheifele, Blake Wheeler, Logan Stanley and Josh Morrissey each had a goal and an assist and Nikolaj Ehlers and Adam Lowry also scored for Winnipeg, which won for the fourth time in five games. Connor Hellebuyck made 35 saves.

Nicolas Roy, Alex Pietrangelo and Michael Amadio scored for Vegas, which took its fifth straight loss and fell for the 11th time in the past 15 games (4-10-1). The Golden Knights allowed a season-high goal total.

Bo Horvat scored two goals and added an assist as host Vancouver defeated New Jersey for the first time in more than seven years. The Canucks had lost 12 straight in the series since a victory on Nov. 25, 2014.

Jack Hughes had a goal and an assist while Ryan Graves and Nathan Bastian also scored for the Devils. Nico Daws was pulled at 8:51 of the second period after allowing four goals on 21 shots. Jon Gillies stopped eight of 10 shots the rest of the way.

Tanner Jeannot and Eeli Tolvanen scored in a span of 1:23 late in the second period to lift Nashville over visiting Pittsburgh.

Mattias Ekholm and Yakov Trenin also scored, and Roman Josi added three assists for the Predators, who have won five of their past six games. Juuse Saros made 35 saves.

Jake Guentzel scored for the Penguins, Casey DeSmith made 21 saves and Sidney Crosby extended his points streak to 10 games despite leaving briefly after a collision.

Chris Kreider scored the tying goal during a power play with 6:20 remaining in regulation. He scored his 39th goal, league-leading 20th power-play tally when he backhanded the puck into the vacated right side of the net after Fox’s long blast hit the crossbar and caromed off the end boards. Johnny Brodzinski and Mika Zibanejad scored for the Rangers, who blew a pair of one-goal leads before getting their league-leading 20th comeback victory.

Max Comtois and Fowler scored in the first two periods for the Ducks, who dropped to 9-11 in games decided after regulation. The Ducks also fell to 4-9-3 in their past 16 contests.

Kuemper has five shutouts this season, including four since the All-Star break. Valeri Nichushkin and Mikko Rantanen each had a goal and an assist, and J.T. Compher scored one of two power-play goals for the Avalanche, who lead the NHL with 91 points (43-13-5).

Jonathan Quick made 24 saves for the Kings, who have lost three of four and were shut out for the second time in three games.

John Tavares had a goal and an assist for the Maple Leafs, who had lost two in a row. Rasmus Sandin, Ondrej Kase and Ilya Mikheyev also scored for Toronto. Mitchell Marner and Morgan Rielly each added two assists.

Jake Oettinger stopped 36 shots for the Stars, who started a four-game road trip with their third loss in a row.

Lawson Crouse and Clayton Keller each had a goal and assist and Arizona used a four-goal first period to beat host Montreal.

Barrett Hayton, Anton Stralman, Nick Ritchie and Crouse each scored in the first for Arizona, which posted those four goals on seven shots in the period.

Cole Caufield scored twice over an eight-second span late in the second period and Laurent Dauphin had a goal for the Canadiens, who are 1-2-1 since winning seven of eight.

Evander Kane scored twice and Warren Foegele recorded the winning goal with 5:25 remaining to help lift Edmonton to a home win over Detroit.

After Foegele scored to make it 6-5, Kane scored an empty-net goal with 1:09 remaining to seal the win for Edmonton, which has won three in a row.

Detroit has lost six in a row and eight of its last nine.