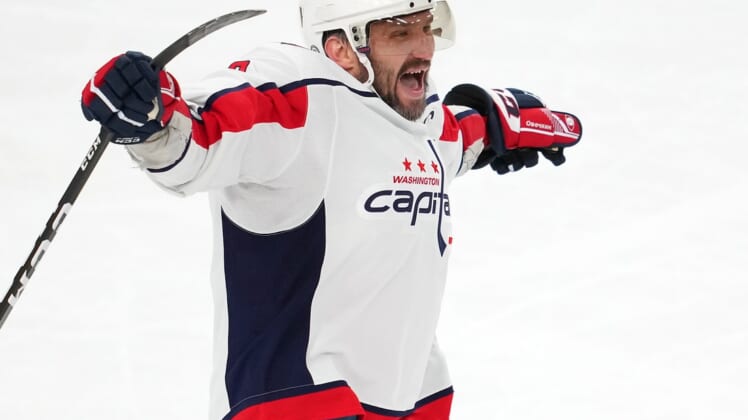 Shea Theodore scored at 2:09 of overtime as the Vegas Golden Knights overcame a history-making night by Alex Ovechkin to keep their playoff hopes alive with a 4-3 victory over the Washington Capitals on Wednesday night in Las Vegas.

Vegas closed within two points of the Dallas Stars for the final Western Conference wild-card spot. The Golden Knights are also just three points behind the third-place Los Angeles Kings in the Pacific Division.

Ovechkin had two goals and an assist. His second goal gave him 50 in a season for the ninth time in his career, tying Wayne Gretzky and Mike Bossy for the most 50-goal seasons in NHL history.

Connor McDavid had a goal and two assists to help Edmonton post a win against visiting Dallas.

The output moved McDavid past Florida Panthers forward Jonathan Huberdeau into the NHL scoring lead with 113 points. Huberdeau has 111.

Evander Kane, Derek Ryan, Zach Hyman and Jesse Puljujarvi each added a goal and Evan Bouchard had two assists for the Oilers, who moved four points ahead of the Los Angeles Kings in the battle for second place in the Pacific Division. Jason Robertson and Roope Hintz each had a goal and an assist for the Stars.

Cale Makar and Artturi Lehkonen scored for the Western Conference-leading Avalanche, who have lost their past two games. Pavel Francouz made 26 saves in the loss.

Alex DeBrincat notched his 40th goal of the season in overtime and Alex Vlasic netted his first NHL goal as visiting Chicago claimed a victory in Glendale, Ariz.

Dominik Kubalik and Jake McCabe also scored for the Blackhawks, and Kevin Lankinen made 32 saves. Chicago has only two wins in its past 12 outings.