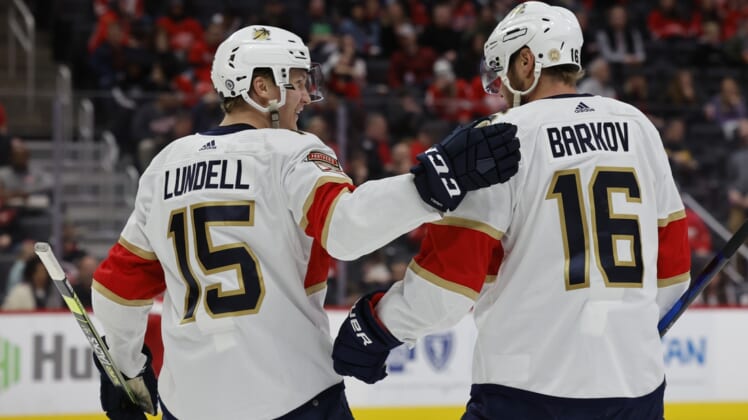 Barkov got behind the defense, took a pass from Jonathan Huberdeau and slid the puck past Ilya Sorokin for the game-winner, his 37th goal of the season.

Sergei Bobrovsky made 24 saves for the Panthers, who are tied with the Colorado Avalanche for the NHL lead in points. Huberdeau assisted on all three goals and has a league-leading 81 assists on the season.

Sebastian Aho and Jean-Gabriel Pageau scored for the Islanders). Sorokin deserved a better fate as he made 39 saves in his fifth straight start while Semyon Varlamov recovers from an illness.

The Bruins controlled the puck in overtime and won 48 seconds in when Jake DeBrusk set up McAvoy for his winning shot from the slot.

DeBrusk and Taylor Hall also scored for the Bruins, while Jeremy Swayman made 20 saves for Boston. Pavel Buchnevich had a goal and an assist, Robert Thomas also scored and Vladimir Tarasenko collected two assists for the Blues, who extended their point streak to 13 games (11-0-2).

Matt Duchene became the first 40-goal scorer in Nashville history and Mikael Granlund potted the shootout winner in a home victory over Calgary.

Filip Forsberg also scored for the Predators, who strengthened their hold on a Western Conference wild-card playoff spot. Juuse Saros made 19 saves through overtime.

Andrew Mangiapane scored both goals for the Pacific Division-leading Flames, who have a 10-point edge in the chase for the division title. Dan Vladar stopped 25 shots prior to the shootout.

Adam Gaudette scored the deciding shootout goal to give Ottawa a road win over Vancouver.

Alex Formenton had two goals, Parker Kelly scored and Nikita Zaitsev had two assists for Ottawa. Zaitsev set up Formenton’s third-period goal that put the Senators ahead 3-2 after they trailed 2-0 at the end of the first period.

The Canucks saw their six-game winning streak end, though they still have an eight-game points streak (6-0-2). Brock Boeser and J.T. Miller each had a goal and an assist for the Canucks. Travis Dermott scored Vancouver’s other goal.

Scott Reedy scored twice to highlight San Jose’s three-goal first period and the Sharks held on for a victory over visiting Columbus to snap a 10-game losing streak.

Rudolfs Balcers also scored a goal for San Jose, which won for the first time since a 4-1 victory over Anaheim on March 26. Kaapo Kahkonen made 22 saves for his first win in eight games and seven starts with the Sharks. Kahkonen was acquired from the Minnesota Wild at the trade deadline on March 21.

Kevin Fiala had a goal and an assist to help visiting Minnesota to a win over Montreal.

Fiala has seven goals and seven assists in a seven-game point streak. Matt Boldy also scored and Cam Talbot made 26 saves for the Wild, who won for the fifth time in their past six games.

Carey Price made 28 saves in his second start of the season for the Canadiens, who have lost six straight.

Oskar Sundqvist and Lucas Raymond also potted goals for the Red Wings, who salvaged one game in the four-game season series (1-1-2). With Alex Nedeljkovic out due to an illness, veteran Red Wings goalie Thomas Greiss stepped into the crease and had a stellar game with 38 saves.

Ross Colton scored a pair and Nikita Kucherov also found the net for the Lightning, who fell to 4-4-2 in April. Tampa Bay’s Steven Stamkos produced three assists to tie Martin St. Louis for the franchise record with 953 points.

William Nylander and Ilya Mikheyev each had a goal and an assist as Toronto defeated visiting Philadelphia.

Timothy Liljegren, Jason Spezza and David Kampf also scored for the Maple Leafs, who won their fourth consecutive game. Jack Campbell made 37 saves for the victory.

James van Riemsdyk and Ronnie Attard scored for the Flyers, who have lost six in a row. Martin Jones stopped 24 shots.

Igor Shesterkin made 31 saves as host New York posted a victory over Winnipeg.

The Rangers reached 50 wins for the fifth time in team history and first time since the 2014-15 season. New York also posted its third consecutive shutout after blanking the Philadelphia Flyers and Detroit Red Wings in the past week.

Phillip Danualt scored a goal for the fourth consecutive game and Jonathan Quick sparkled in net as Los Angeles strengthened its hold on third place in the Pacific Division and a playoff spot with a victory at Anaheim.

Adrian Kempe also scored for the Kings, who have won two straight games. Quick made 29 saves — 16 of them in the second period, including a couple of jaw-droppers during an Anaheim power play while the score was tied.

Adam Henrique replied for the Ducks, who have long been eliminated from playoff contention. John Gibson stopped 26 shots.