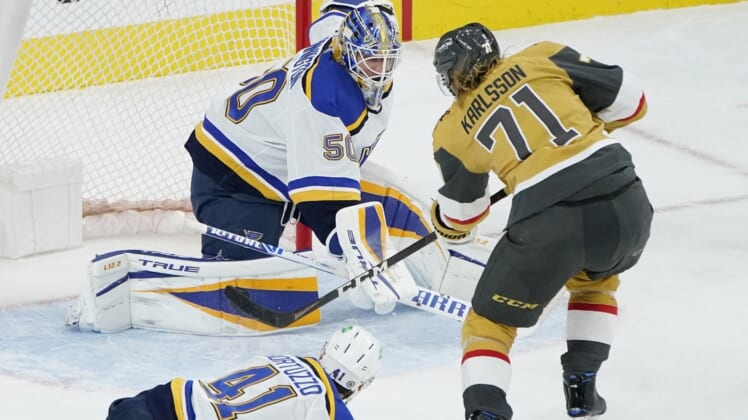 Mark Stone had two goals and an assist and William Karlsson had a goal and two assists for the Vegas Golden Knights, who scored four times in the third period to hand the St. Louis Blues a 5-1 loss on Monday night in Las Vegas.

Jonathan Marchessault added a goal and an assist and Keegan Kolesar also scored for Vegas, which remained three points ahead of second-place Colorado in the West Division. The Golden Knights begin a two-game series with the Avalanche on Thursday night in Denver.

Robin Lehner, making just his second start since Feb. 7 after recovering from a concussion, stopped 15 of 16 shots to improve to 5-1-1 this season.

Vince Dunn scored for St. Louis, which had a two-game winning streak snapped and fell for just the sixth time in 18 road games this season (12-4-2). Jordan Binnington finished with 30 saves.

Anthony Beauvillier scored at 3:41 of overtime to lift New York to a victory at Philadelphia.

Beauvillier took advantage of a Philadelphia turnover and scored for the second straight game. Oliver Wahlstrom also scored for the Islanders, who won for the 13th time in their past 16 games (13-2-1). New York goaltender Ilya Sorokin made 36 saves and won his eighth straight start.

Oskar Lindblom scored the lone goal for the Flyers, who have dropped three of four (1-2-1). Philadelphia did receive a boost with the return of Sean Couturier, who was a late scratch with a lower-body injury on Saturday.

Chris Kreider scored a pair of power-play goals, including the tiebreaking tally 5:47 into the third period, lifting New York past NHL-worst Buffalo, which tied a team record with its 14th consecutive loss, falling to 0-12-2 in that span.

Kreider snapped a pair of ties with his team-leading 15th and 16th goals. He scored on a deflection midway through the second period and then got the game-winner by scoring on a rebound less than two minutes after the Rangers squandered a two-goal lead.

Adam Lowry scored twice and Connor Hellebuyck made 22 saves as Winnipeg won at Vancouver. It was the first shutout of the season for Hellebuyck, the reigning Vezina Trophy winner as the NHL’s top goaltender.

Blake Wheeler and Paul Stastny also scored for the Jets, who snapped a two-game losing streak, which matched their longest of the season. Winnipeg improved to 11-1-1 this season following a loss.

Vancouver goalie Thatcher Demko, who had gone 8-1-0 in his previous nine starts, stopped 25 of 29 shots. The Canucks had their five-game point streak snapped (4-0-1).

Ryan Suter and Nick Bjugstad scored for the Wild, who avoided what would have been their first three-game losing streak of the season. Troy Terry scored and Ryan Miller had 21 saves in his sixth straight start for the Ducks, who have not won in regulation in their past 18 games, going 3-12-3 in that span.

Jesper Fast collected a goal and an assist, Sebastian Aho had two assists, and Alex Nedeljkovic made 19 saves as visiting Carolina shut out Columbus. Brady Skjei and Martin Necas scored Carolina’s other goals.

The 25-year-old Nedeljokvic recorded the second shutout of what has become a breakout season. With Petr Mrazek injured, Nedeljokic has received regular playing time and delivered a 7-2-2 record and .923 save percentage in 11 starts for the Hurricanes.

The Hurricanes ended a three-game winless streak (0-1-2). The second of the losses was in overtime to the Blue Jackets and the third was in a shootout, also against the Blue Jackets, to start the four-game series between the teams. They meet again Thursday in Columbus.

Mikko Rantanen, Nazem Kadri and Pierre-Edouard Bellemare also scored goals while Tyson Jost and Valeri Nichushkin had two assists each for Colorado, which has won seven straight. Grubauer got his career-high 19th victory of the season in the 200th NHL game of his career.

Oliver Ekman-Larsson scored and Antti Raanta had 30 saves for the Coyotes, who lost for the sixth time in their past seven games (1-4-2).

Logan Couture and Ryan Donato scored for San Jose, and Jones worked hard to keep the Sharks ahead, making 41 saves on the evening. Kevin Labanc and Evander Kane assisted on Couture’s goal with John Leonard and Nikolai Knyzhov aiding Donato.

Matt Roy scored the lone goal for the Kings, who outshot the Sharks 42-23. Austin Wagner and Gabriel Vilardi assisted on Roy’s goal while Jonathan Quick made 21 saves in the loss.

Chris Tierney’s goal late in regulation broke the deadlock and rookie goaltender Filip Gustavsson won in his first career start to give host Ottawa a victory over Calgary.

Ryan Dzingel also scored for the Senators, who received a 35-save performance from Gustavsson. Ottawa sits last in the North Division but has won four of six meetings with the floundering Flames.

Johnny Gaudreau scored the lone goal for the Flames, who have dropped two straight games and three of four affairs. Jacob Markstrom made 21 saves in the loss for Calgary, which sits ahead of only Ottawa in the division.