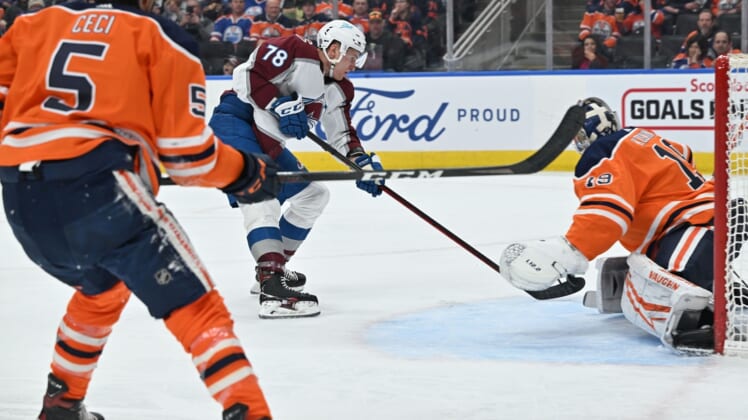 Nathan MacKinnon scored the shootout winner and goaltender Darcy Kuemper was sensational all game to lead the visiting Colorado Avalanche to their sixth consecutive win, 2-1 over the Edmonton Oilers on Saturday.

MacKinnon also scored in regulation for the league-leading Avalanche (52-14-6, 110 points).

In a fantastic netminding duel, Kuemper made 49 saves through overtime, 11 of them in the extra period. Eight of those 11 came during a frantic Oilers power play. He also denied all three Oilers he faced in the shootout: Connor McDavid, Leon Draisaitl and Ryan Nugent-Hopkins.

MacKinnon, who was in the penalty box during Kuemper’s overtime heroics, notched the winning goal with a backhand deke, essentially his trademark move.

Warren Foegele replied for the Oilers (42-25-6, 90 points), who had their six-game winning streak — and nine-game home winning streak — snapped. Goalie Mikko Koskinen stopped 33 shots prior to the shootout, including a handful of clutch stops during a Colorado power play in the final minutes of regulation, which forced overtime.

The Oilers sit second in the Pacific Division, seven points behind the Calgary Flames in the chase for the top spot.

Despite the lack of offense, the clubs played through a pair of entertaining first two periods. Kuemper was especially strong in the second period, when the Oilers outshot the visitors by a 10-0 count in the first seven minutes of the frame and finished the period with a 16-5 edge in shots.

Foegele finally broke the scoreless deadlock at 5:24 of the third period. Nugent-Hopkins won a battle for the puck to get it to the point, and Foegele deflected Darnell Nurse’s point shot for his 11th goal of the season.

MacKinnon’s 26th goal evened the score with 5:07 remaining in regulation. After a Devon Toews point shot hit Colorado forward Valeri Nichushkin in front of the net, MacKinnon grabbed the loose puck before taking his time and depositing a backhand shot into the goal.