NFL commissioner Roger Goodell was paid nearly $128 million in salary, bonuses and benefits over the past two years, the New York Times reported.

The Times, citing four unnamed sources who attended the owners meetings in New York this week, reported Thursday night that Goodell’s compensation during the 2019-20 and 2020-21 fiscal years was about 90 percent based on bonuses, with his pay tied to helping negotiate a new labor deal and lucrative media rights contracts.

Last year, according to ESPN, he voluntarily requested to the league’s compensation committee that his base salary be reduced to zero due to the pandemic. 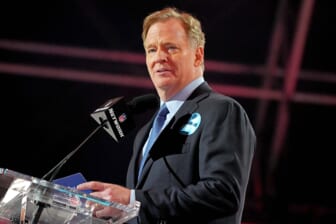 NFL players and owners reached a new collective bargaining agreement to keep the peace with players through at least 2030, in March 2020. This March, the NFL reached agreements reportedly worth more than $100 billion with CBS, ESPN/ABC, Fox, NBC, Amazon and NFL Network that will run through the 2033 season.

Goodell, 62, was elected to replace Paul Tagliabue as NFL commissioner in 2006.

The league declined comment to The Times on the report.