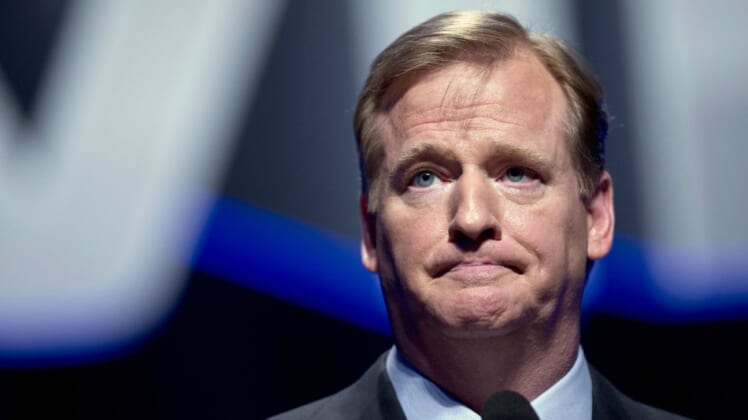 Carolina Panthers defensive end Greg Hardy saw his domestic violence case dropped in a North Carolina court on Monday morning. The reasoning behind his case being dropped is as shady as it comes.

The alleged victim in this case, Nicole Holder (Hardy’s ex-girlfriend) was a no-show in court on Monday. After the prosecutor attempted to contact her multiple times, the judge decided to dismiss the charges altogether—a decision that came because the plaintiff in the case was not available to testify.

This comes on the heels of Hardy and Holder reaching some sort of behind-the-scenes financial agreement stemming from an incident last May in which it was alleged that Hardy assaulted and threatened to kill Holder. There’s no information available on the financial terms of the agreement the two sides had recently come to.

The plaintiff spoke about the case in open court prior to Hardy’s original conviction on domestic violence charges.

He looked me in my eyes and he told me he was going to kill me. I was so scared I wanted to die. When he loosened his grip slightly, I said, ‘Just do it. Kill me.

Immediately after the conviction, Hardy appealed for a jury trial—the court date that was set for Monday and led to all charges being dropped.

In short, it’s rather obvious Hardy paid Holder off here.

With the legal troubles behind him, Hardy’s focus now turns to the football field. He was placed on the Commissioner’s Exempt List following Carolina’s Week 1 outing, but was able to still collect his $13.1 million salary and bonuses stemming from the Panthers playoff appearance.

This places the league’s new domestic violence policy under tremendous scrutiny. In reality, Hardy was never convicted of a crime. So there are some who will conclude that due process should play a role in the league’s final decision.

However, the policy is clear about where the league stands on domestic violence cases. It reads, in part…

Effective immediately, violations of the Personal Conduct Policy regarding assault, battery, domestic violence or sexual assault that involve physical force will be subject to a suspension without pay of six games for a first offense, with consideration given to mitigating factors, as well as a longer suspension when circumstances warrant.

Among the circumstances that would merit a more severe penalty would be a prior incident before joining the NFL, or violence involving a weapon, choking, repeated striking, or when the act is committed against a pregnant woman or in the presence of a child. A second offense will result in banishment from the NFL.

There’s no indication in the policy that the league requires conviction to punish offenders. Instead, that’s left up to the NFL based on individual circumstances.

Considering Hardy was placed on the Commissioner’s Exempt List, only Roger Goodell can reinstate him. This makes the situation that much more difficult for the league itself. As we mentioned above, Hardy was paid while he was away from the team this past year. Short of the league collecting a six-game paycheck from him as a first-time offender under this policy, it stands to reason he will be suspended for that length to start the 2015 campaign.

Hardy is set to become a free agent in March and is unlikely to return to the Panthers next season. Any team thinking about bringing the defensive end in would want some sort of conclusion before signing him—a conclusion that doesn’t appear to be etched in stone under the league’s current policy.

With all eyes on the NFL following both the Adrian Peterson and Ray Rice situations, the league needs to show everyone that it takes domestic violence seriously. It also has to abide by the terms of the Collective Bargaining Agreement and show fairness to those employed under the umbrella of the NFL Players Association.

That’s the problem. Due to its own lack of consistency on the issue, the NFL finds itself between a rock and a hard place here. How it responds to the Hardy situation will tell us a lot about what the powers to be in New York City will do regarding domestic violence moving forward.

If it’s not up to snuff, the general public’s backlash against the league will be re-energized. If it’s too stiff, the players association is sure to come out against the NFL.