5 players under the most pressure heading into NFL Week 2

The first week of the NFL season included brutal losses for “contending” teams such as the Buffalo Bills and Green Bay Packers. While Josh Allen played pretty well for Buffalo, Aaron Rodgers’ performance for Green Bay was among the worst of Week 1.

Rodgers joins other big-name players in facing the most pressure to succeed with Week 2 of the 2021 NFL season getting going here soon. Here’s a look those who are under a microscope at this early stage in the campaign.

It’s not that Zeke played a horrible game against the Tampa Bay Buccaneers in Week 1. Kellen Moore’s scheme called for him to block a whole heck of a lot, which helped free up things for Dak Prescott and the passing game.

With that said, Elliott gained a mere 33 yards on 11 attempts against the best run defense in the NFL. It led to an unbalanced attack and a 31-29 road loss. Set to take on a lesser Los Angeles Chargers defense come Sunday, Elliott needs to play more of a role on the ground and in the passing game. That’s especially true now that Dallas’ two starting defensive ends Randy Gregory (COVID-19 list) and DeMarcus Lawrence (broken foot) are sidelined. The Boys will need to score to keep pace with Justin Herbert and Co. It’s that simple.

Howard fancies himself as one of the best, if not the best, corner in the NFL. It’s what led to a hold out during the summer before agreeing to a restructured. Fresh off a late-game takeaway to seal Week 1’s win over the New England Patriots, this Pro Bowler is going to face a difficult task against the Buffalo Bills come Week 2.

Why are we concluding Howard is under so much pressure? It’s rather simple. Going up against Stefon Diggs, he has an opportunity to step up big time. Not only could this lead to a huge contract for the veteran, it could very well help send Miami to a two-game lead over the defending AFC champions. Remember, Diggs put up 15 catches for 229 yards in two games against Miami last season, both wins.

Say what you want about Urban Meyer’s debut or the three interceptions Trevor Lawrence threw in his first NFL regular season game. Whatever the narrative, losing against the lowly Houston Texans painted this team in a terrible light.

Unfortunately, it’s going to be up to Laviska Shenault Jr. to help prop up his rookie quarterback if Jacksonville is going to have any chance Week 2 against an elite-level Denver Broncos defense. The stud youngster caught 7-of-9 passes in his sophomore debut last week. However, he gained a mere 50 yards on those targets. If the Colorado product fails to step up, it’s going to be another ugly game for Jacksonville.

It goes without saying that having a turnover-prone quarterback disables a team’s ability to remain competitive on a consistent basis. For the Giants, that was most certainly the case during their Week 1 loss to the Denver Broncos. After leading the league in fumbles each of the past two seasons, Daniel Jones put the ball on the turf once again last week. It came immediately after Denver scored a touchdown to open up a 17-7 lead in the third quarter. With his Giants driving, Jones fumbled at the Broncos’ 22. Denver then scored a field goal to pretty much put the game away. 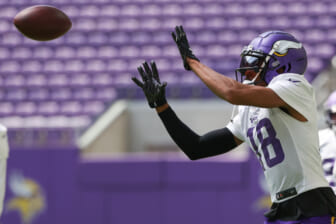 This has been a common theme for the former first-round pick from Duke. It can’t continue to happen if New York wants to compete in the NFC East and head coach Joe Judge wants to last two full seasons in Jersey. Simply put, Jones must play better football starting Thursday evening against the Washington Football Team.

There’s some sort of narrative surrounding Rodgers following a blowout 38-3 loss to the New Orleans Saints. Perhaps, his head just isn’t in the game after a drama-filled offseason between the reigning NFL MVP and his organization. Is it possible he has hit that proverbial wall we’ve seen from other great quarterbacks in the recent past?

Either way, Rodgers has a lot to prove as his Packers prepare for a “Monday Night Football” matchup against the hapless Detroit Lions. Dan Campbell’s squad just gave up 41 points to the Jimmy Garoppolo-led 49ers last week with the quarterback going for north of 300 yards. If Rodgers struggles against this defense, it could end up being a harbinger of things to come.