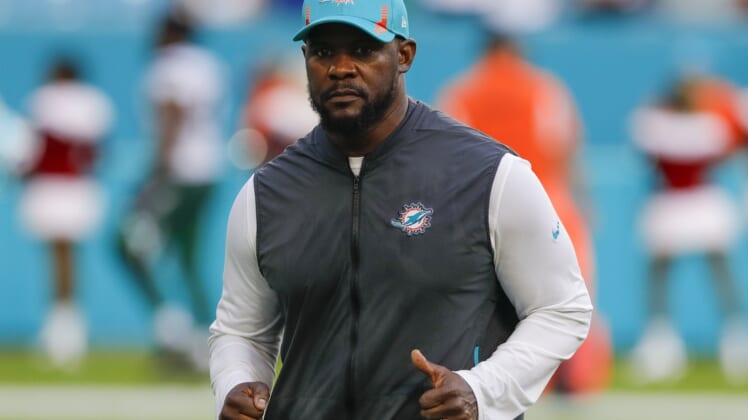 The NFL and various teams named in Brian Flores’ racial discrimination lawsuit said in a court filing Thursday that they intend to file a motion to compel the case into arbitration.

Flores’ lawyers said in a statement to multiple media outlets that the move would rob the case of much-needed public transparency.

“We have said from the start that if the NFL wants to create change, the first step is to allow for transparency,” attorneys Douglas H. Wigdor and John Elefterakis said in a statement. “The NFL’s attempt to force these claims into arbitration demonstrates an unmistakable desire to avoid any public accountability and ensure that these claims are litigated behind closed doors in a forum stacked against our clients.

“We will fight this request in court, but Mr. Goodell should have done the right thing, disclaimed arbitration altogether and allowed this case to be tried before a jury representing a cross-section of the community, just like those who watch football.”

Flores, now a defensive assistant with the Pittsburgh Steelers, was fired as head coach of the Miami Dolphins following the 2021 season, his third year in the role. He claims he was fired for not cooperating with owner Stephen Ross’ plans to “tank” or to tamper with a “prominent quarterback” who was under contract elsewhere.

He had an interview for the New York Giants’ vacant coaching job, but New England Patriots coach Bill Belichick mistakenly told him over text that Brian Daboll had been chosen before Flores could interview. Flores’ lawsuit also accused Denver Broncos executives John Elway and Joe Ellis of acting unprofessionally during a “sham” interview for their head coaching job in 2019, even appearing drunk in their meeting.

The league and teams have denied all of Flores’ allegations. The NFL hired former U.S. attorney general Loretta Lynch to represent it in the proceedings.

Former Arizona Cardinals head coach Steve Wilks and longtime assistant coach Ray Horton, who like Flores are Black, joined the class-action suit earlier this month, bringing their own accusations of racial bias in their careers.