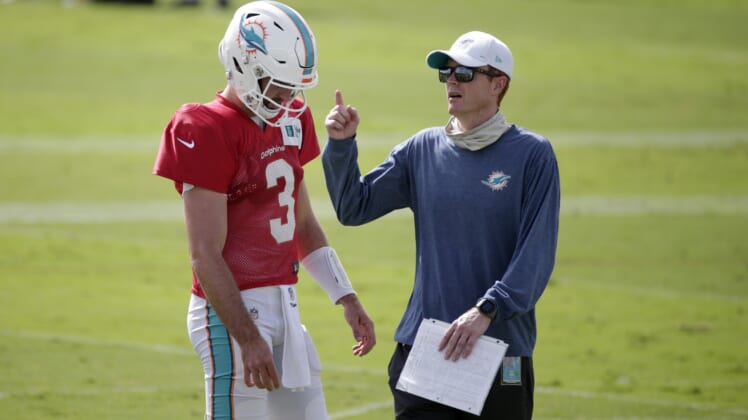 Former Arizona Cardinals top-10 pick Josh Rosen simply has not been given much of a chance to prove his worth as a capable NFL quarterback.

Arizona gave Rosen 13 games to prove himself as a rookie back in 2018 before selecting Kyler Murray No. 1 overall the following April. He was jettisoned from Arizona during the draft last year, ultimately landing in South Beach with the Miami Dolphins. The UCLA product started just three games in Miami.

Now that the Dolphins have Tua Tagovailoa as their quarterback of the future and with Ryan Fitzpatrick as a stop-gap option, they have reportedly put Rosen on the trade block.

Despite his lack of success (12 touchdowns, 19 interceptions), Rosen is still only 23 years old and boasts a nice amount of upside. Here, we look at the top-five potential landing spots for the young signal caller.

Houston Texans: A.J. McCarron is not the answer behind Deshaun Watson

There’s some teams that might look to acquire Rosen as a way to potentially build for the future at quarterback. Other squads will view him solely as a backup given his track record, lack of success and relatively small sample size. One team that makes sense in that regard is the Houston Texans.

Given the way Watson plays with a full-bore ahead mentality, Bill O’Brien and Co. need a legit backup behind the star signal caller. McCarron is not it. Here’s a guy that has started four combined games in six NFL seasons after the Bengals made him a mid-round pick back in 2014. He’s played on a plethora of teams during that span and is probably better suited for an assistant coach role than being on an NFL roster as an actual quarterback. A Josh Rosen trade makes a lot of sense here.

Denver Broncos: Drew Lock is the starter, but the team needs depth

A second-round pick out of Missouri last year, Lock played exceedingly well as a rookie. It enabled Denver to move on from the bust that is Joe Flacco and start anew with a stacked offense. Despite this, general manager John Elway and Co. don’t have depth behind Lock.

As of right now, former San Francisco 49ers late-round pick Jeff Driskel is slated to be Lock’s primary backup. He’s started all of eight games in four NFL seasons and is seen as nothing more than a journeyman at this point in his career. Would a trade for Josh Rosen be an upgrade? That’s without question.

This one is pretty clear cut. In no world should former Oregon State quarterback Sean Mannion be one injury away from starting an actual NFL game. We’re talking about a guy who has struggled in the past during preseason games against future practice squad fodder and real estate agents. He’s thrown exactly zero touchdowns in five NFL seasons.

Minnesota is vying for a conference title this season. And while Rosen would be a marked downgrade from Kirk Cousins, he seems to fit the team’s offense to a T. At the very least, he’s not Sean Mannion.

Los Angeles Rams: A Southern California reunion could be in the cards

Rosen would likely have to land in the perfect situation in order for him to live up to pre-draft expectations. Off the field, there would be no better situation than returning to his Southern California roots. The Manhattan Beach native would certainly feel more comfortable playing at home.

From an on-field perspective, this makes too much sense. Starting quarterback Jared Goff was downright disastrous last season after signing a lucrative contract extension. Perhaps, bringing Rosen in would light a fire under him. More than that, the Rams’ backup quarterback situation is iffy right now. That includes John Wolford and Bryce Perkins as the two other signal callers on the roster. Pulling off a trade for Rosen makes the most sense for head coach Sean McVay and Co.

As we saw last season, Mason Rudolph and Devlin Hodges were not prepared to take over for Big Ben after he went down in Week 2. The duo combined to throw 18 touchdowns and 17 interceptions. It’s been a growing trend for general manager Kevin Colbert — an inability to find that future quarterback for Roethlisberger to groom.

This is the perfect fit. Rosen’s strong personality would mesh well with Big Ben. A trade of this ilk would not cost Pittsburgh too much. And in doing so, the team could very well have its quarterback of the future. Of all the possibilities, a Rosen trade to Pittsburgh makes the most sense.