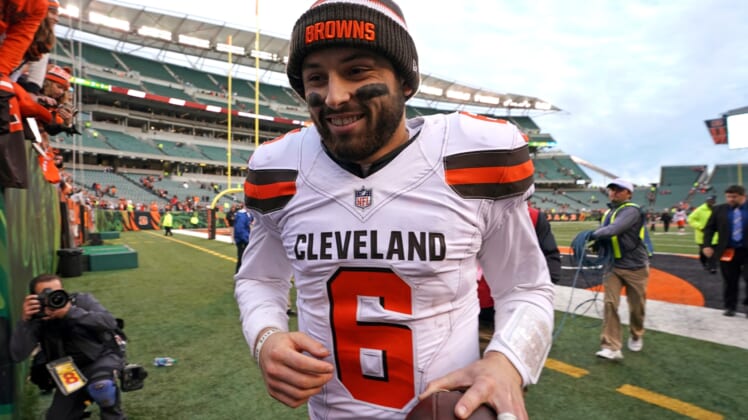 Everyone’s focused on the incoming rookie class of quarterbacks, but the five starters who were drafted in 2018 are all facing huge challenges as they continue their NFL journeys.

The big picture: Last year, all five first-round quarterbacks — Baker Mayfield, Sam Darnold, Josh Allen, Josh Rosen, and Lamar Jackson — got significant time under center. At least four of them will be starting from the first week of the season in 2019.

But what should fans expect?

Because of his unique situation in Arizona, we’ll open up by discussing expectations for Rosen.

Josh Rosen: Nobody knows if Rosen is going to be the starter for the Arizona Cardinals, or if he’ll be traded. What we know for certain is that his rookie campaign was absolutely brutal.

If he stays in Arizona, that trend might just continue.

If Rosen is moved in a trade, there’s a chance he might not even play a single down in 2019. Either way, it’s hard to be excited about the UCLA product’s immediate future, even if he shows great potential in the long run.

Josh Allen: Accuracy was a problem last season for Allen, who also had little help up front and dealt with a running back corps that was banged up. However, this second-year starter had his front office retool the offense in a big way.

Allen should grow by leaps and bounds. If he can get more mechanically sound, he will develop into a deadly passer. His athleticism and willingness to attack defensive secondaries was already on display last year. It would be shocking if he didn’t take a huge step forward in his development.

Lamar Jackson: Joe Flacco is in Denver because of what Jackson was able to do as a rookie starter through the second half of the season, and into the playoffs. The big issue here is that Jackson must develop more as a pocket passer and stop fumbling the ball away.

However, the Ravens are doing what they can to facilitate his development.

Overall, there will almost assuredly be growing pains this year from Jackson. He’s still raw and has been even going back to his Heisman Trophy days at Louisville. Yet it appears the Ravens have a rock-solid plan to help him thrive.

Sam Darnold: The former USC star had plenty of learning experiences playing for a losing team as a rookie. He made some bone-headed plays but also showed off his elite talent.

The Jets did some big things in free agency that should help Darnold to grow in his second year.

Of course, the Jets also brought respected NFL offensive coach Adam Gase to help mold Darnold into a star. Whether he’s able to do that remains to be seen. Yet it’s impossible not to be excited about Gang Green’s offense, and Darnold, this coming season. He should improve in every facet provided he stays healthy.

Baker Mayfield: Easily the best of the bunch last season, Mayfield was phenomenal as a rookie and brought hope to a fan base that’s been craving it for decades.

Even more frightening for opposing teams is the fact that Cleveland got so much better this offseason, even before the draft.

Mayfield broke the NFL single-season passing touchdown record (previously held by Peyton Manning), despite playing in just 14 games. He now has significantly more firepower on his side. He also has head coach Freddie Kitchens in his corner in a big way. As a result we expect him to have a huge second campaign as a pro.