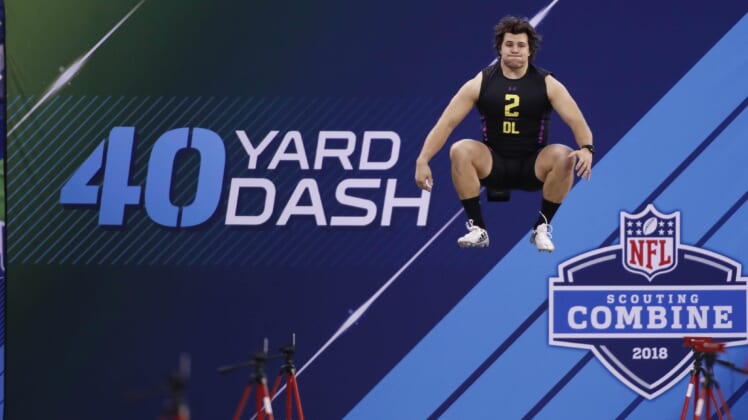 For the players attending the NFL Scouting Combine, it’s one of their biggest opportunities to stand out on a huge stage with coaches and executives keenly watching.

But the combine is also ridiculous, in a number of ways.

It’s somehow become must-see television that’s being broadcast live by multiple cable networks, and this year ABC jumped into the fray, too.

In a way, we do get it — people are addicted to football, and the combine gives them something to hang onto before the draft. Still, it’s impossible to not point out how dumb some of the things that go down truly are. Here are the ones that stand out the most.

The shocking questions during interviews

Teams get intensely psychological during their interviews with players. But they have all too often crossed the line with their questions.

Eli Apple was asked a highly inappropriate question during his interview with the Atlanta Falcons a couple years back, which the team later apologized for. Dez Bryant called out former Miami Dolphins general manager Jeff Ireland for asking if his mom was a prostitute. Former NFL defensive end Austen Lane said he was asked if he thought his mother was attractive.

Heck, one prospect was asked to take part in a staring contest during one of his interviews. That’s just ridiculous.

So yeah, the way teams try to get under the skin of these young men is just dumb.

The incessant flow of rumors

Brace yourself, because you’re about to get crushed by a wave of outrageous rumors during the 2019 NFL Scouting Combine. It happens every year. With all 32 teams’ coaches, front office personnel and many owners in attendance, a heck of a lot is discussed.

Because of that, teams and agents let fly with the highest concentration of rumors you’re likely to see in such a short period of time. Last year, the hot rumor was that the New York Giants were going to trade Odell Beckham Jr. A few years back, everyone was talking about how Colin Kaepernick was going to be traded.

Much of what gets floated ends up being nothing but hot air. But it’s a prime chance to spread rumors that fans desperate for any NFL news will eat up with a spoon.

Just consider yourself warned: This is lying season in the NFL. Most of what you’re about to hear is absolutely never going to happen.

The obsession with 40 times

Nothing quite encapsulates the modern NFL Scouting Combine viewing experience like millions of people glued to the tube as young men in tights run as fast as they can.

Let’s be clear: There is some value to having specific positions run the 40-yard dash. Running backs, wide receivers, cornerbacks, and safeties should show off their speed compared to their peers in a setting like this. It’s just one more box to check off in the evaluation process.

But there are a couple of reasons why the 40 is so ridiculous these days. First off, nobody needs to see linemen run that far, and quarterbacks don’t need to run, either. If anything, have linemen run a 10-yard or 20-yard stretch to measure their explosion off the line. And you already know based off the tape whether a quarterback is elusive or not.

Secondly, even when it comes to the positions that should run, the 40 isn’t the end-all, be-all measurement for how they’ll perform at the next level. Famously, Jerry Rice ran a poor 40 by today’s standard. Many others have run what you’d consider to be “slow” 40 times and then went on to have stellar careers at the NFL level.

Can the 40 help a player? Absolutely. But the obsession with this drill at the NFL Scouting Combine is way over the top. John Ross broke the record a few years back, but he’s struggled in his first two seasons with the Cincinnati Bengals.

The gawking over workout warriors

There are exceptions to this, but for the most part the fawning over players who dominate the combine is seriously tiresome.

Of course, the exceptions include guys like Saquon Barkley, who absolutely stunned last year when he hit the field at Lucas Oil Stadium. But he already was seen as a top-five player. So all it did was confirm what the tape already showed from the former Penn State Star.

However, for every workout warrior who goes on to dominate the NFL, there are dozens of players who never are able to convert their ridiculous athleticism into a successful career. Some prime examples include Vernon Gholston back in 2008, Matt Jones back in 2005, and Mike Mamula back in 1995.

The idea that QBs throwing matters that much

There is some value to seeing quarterbacks throw at the combine. You can see which quarterbacks spin the ball best, which ones have the best touch on deep passes, and you get to see who shines under the pressure that comes from this environment.

But for the most part, these are things that scouts and front-office people already know from watching the players play throughout their college career.

A poor showing in Indianapolis doesn’t necessarily do much at all to drop anyone’s stock. The quarterbacks are throwing to players they haven’t played with before, and so there’s absolutely no chemistry involved. All these guys are going to throw again at their pro day, and again, the tape speaks for itself when it comes to evaluating the abilities of these young passers.