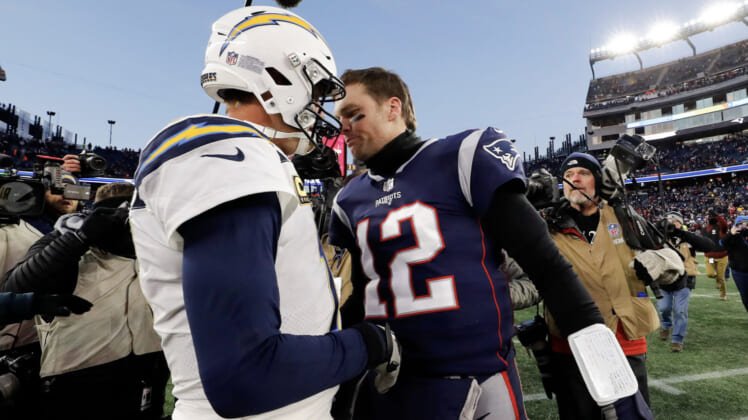 The league’s 32 teams are all in Indianapolis for the NFL Scouting Combine. Equally as important as checking on 2020 NFL Draft prospects, this week is filled with teams talking to one another ahead of free agency.

Rumors have been swirling around Indy for the past couple days with things hearting up big time on Wednesday.

Here’s a look at the juiciest rumors coming out of the NFL Scouting Combine right now.

It was noted earlier in the week that the Cowboys had not met with Prescott since before the 2019 season started back in September. That’s not tremendous news given his status as an impending free agent.

This changed dramatically on Wednesday when Prescott’s agent Todd France met with Cowboys reps in Indianapolis. What do we make of this? Not too sure. Prescott is looking for a deal that will reset the quarterback market. If he does not get it, the Cowboys will likely place the franchise tag on Prescott ahead of the March 12 deadline.

Multiple star players voiced their opposition to the collective bargaining agreement proposal sent to the NFLPA from owners last week. Once the pact was sent for the entire union to vote on Wednesday, it became clear that there’s a real opposition to it.

Green Bay Packers player rep Aaron Rodgers said he voted no, and was backed up by Richard Sherman of the San Francisco 49ers. Others were not as PG-rated, so to speak. It will be interesting to see what comes of this in the coming days. For now, a player-wide vote is not imminent.

It seems to be a foregone conclusion that reigning Heisman winner Joe Burrow will head to the Cincinnati Bengals with the first overall pick in the 2020 NFL Draft. The hip injury Tua Tagovailoa suffered last season with Alabama only seemed to add to this.

Despite Burrow’s willingness to go to Cincinnati, there’s some NFL teams who have him neck and neck with Tua as the top player in the draft. The Bengals could potentially trade down from the first pick and still land Tagovailoa. Though, that’s all speculation right now.

Some around the NFL believe that Rivers to the Indianapolis Colts is already pretty much a done deal. It makes sense in that Indy is looking to upgrade from Jacoby Brissett under center. The team is also in win-now mode.

With that said, another report later on Wednesday indicated that the Las Vegas Raiders plan to make a push for Rivers should they not land Tom Brady. Rivers heading to the Los Angeles Chargers’ fiercest rival would be something else.

This future Hall of Famer has already noted that he is not retiring and could very well move on from the Dallas Cowboys. Witten’s former head coach Jason Garrett is the New York Giants’ offensive coordinator, leading to speculation that a move to Jersey could be in the cards.

It’s now being reported that the Cowboys themselves might have already decided a Witten reunion won’t happen. If that’s the case, this will not be left up to the 11-time Pro Bowler.

NFL Media’s Ian Rapoport reported on Tuesday that the Carolina Panthers plan to move forward with former league MVP Cam Newton as their starter. This spit in the face of widespread suggestions that the Panthers will deal the injury-plagued quarterback next month.

Now comes this piece of information from Bleacher Report’s Mike Freeman indicated that Carolina leaked the above-mentioned report to up Newton’s trade value. The team is said to be honing in on reigning NFL Comeback Player of the Year Ryan Tannehill of the Tennessee Titans. Whether that’s a realistic option remains to be see. Tennessee is said to be willing to place the franchise tag on Tannehill.

Speaking of the Titans, they are one of the latest teams to be mentioned in the Tom Brady sweepstakes. It’s interesting in that Tennessee seems committed to Ryan Tannehill for at least next season. Though, the presence of Brady’s former teammate Mike Vrabel as the Titans’ head coach could change the dynamic here.

A report on Wednesday grouped Tennessee in with the Las Vegas Raiders and New York Giants as potential landing spots for Brady. While we’ve heard the Raiders’ rumors in the past, New York is an interesting option. It has stud youngster Daniel Jones under center. Why would the team look to add an aging veteran on the decline as it attempts to complete a rebuild?

Wide receivers on the move?

Minnesota Vikings head coach Mike Zimmer spoke to the media from Indy on Wednesday. He joined general manager Rick Spielman in making it clear star receiver Stefon Diggs will not be traded this offseason. Whether that’s just PR spin to up Diggs’ value remains to be seen.

Meanwhile, San Francisco 49ers head coach Kyle Shanahan went in a different direction. He admitted that injury-plagued pass-catcher Marquise Goodwin could be on the move. Goodwin played just nine games last season. He is, however, a couple seasons removed from putting up nearly 1,000 yards. There might be a market for him.