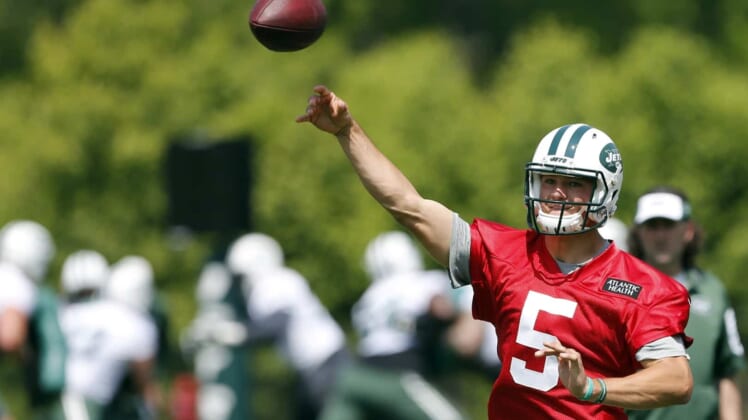 Unless Christian Hackenberg has magically developed pinpoint accuracy this offseason, it seems unlikely he’ll be the starting quarterback for the New York Jets in 2017.

Discussing the Jets’ upcoming so-called quarterback competition, Rich Cimini of ESPN shared what one scout had to say about Hackenberg.

“I talked to an opposing scout who studied him in pregame warmups for one game last season and was taken aback by how many off-target passes he threw,” Cimini wrote.

Accuracy has never been Hackenberg’s strength. During four years at Penn State, he completed just 56.1 percent of his passes. That’s a ghastly total for a college quarterback.

We heard the horror stories about his train-wreck training camp in 2016. And one report indicated he couldn’t even get the ball to Bryce Petty’s feet from 10 yards away during pre-game warmups one week.

Further elaborating on this, Cimini got into just how awful Hackenberg was in college.

“Accuracy is an issue for Hackenberg, whose adjusted completion rate (counting drops, spikes, etc.) was 64 percent in his final year at Penn State, according to Pro Football Focus. That ranked 120th in the nation. The previous year, he was 104th.”

We don’t anticipate Hackenberg beating out Josh McCown for the starting job. And quite honestly, it seems likely he’ll struggle to beat out Bryce Petty for the backup job.

It’s hardly surprising he’s struggled to this point in his NFL career (we predicted his tenure with the Jets would be disastrous). At this point, the real question the Jets have to ask themselves is if he’s worth a roster spot at all the next couple of seasons. His preseason performances will be telling, and we’ll be watching with great interest to see how he fares.