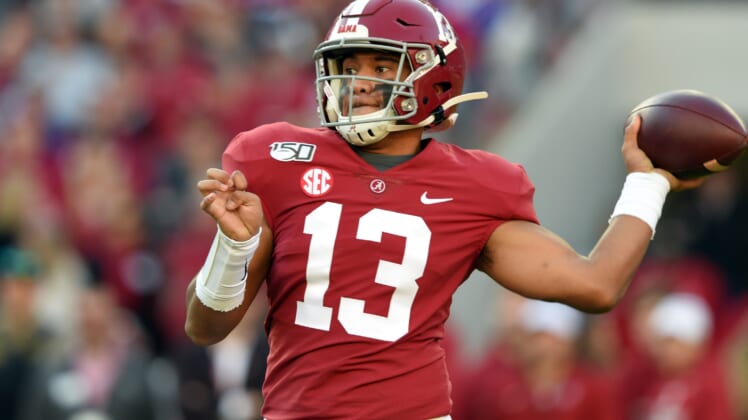 While the medical concerns for former Alabama Crimson Tide quarterback Tua Tagovailoa have put his draft stock at risk ahead of the 2020 NFL Draft, no one questions his talent when healthy. In fact, one NFL scout even compared his game to Kansas City Chiefs quarterback Patrick Mahomes.

Comparing a 22-year-old quarterback with only 684 career pass attempts in college to a Super Bowl MVP seems jarring. But the NFL scout’s comparison, from Bob McGinn’s latest draft report, is based on the similar traits both quarterbacks share, with Tagovailoa being a left-handed version of Mahomes.

“He’s probably a left-handed Patrick Mahomes,” said one scout. “He does the same things Mahomes does. He gets out of the pocket. He doesn’t need to set his feet. He can throw the ball the length of the field,” the NFL scout said, via The Athletic. “Take a look at the LSU game. He had never been in that situation before in his life and he brought them back. … He does have inconsistent mechanics. He needs to square up and set his feet more. But left-handers do things differently.”

It’s also worth noting how well Tagovailoa played at Alabama. Across 32 games, he racked up 7,442 passing yards, averaged 10.9 yards per attempt, posted a 199.4 quarterback rating and scored 96 total touchdowns. He also drew comparisons to future Hall of Famer Drew Brees for their similar traits.

While NFL teams won’t be able to examine and medically clear Tagovailoa’s hip, the young quarterback came out of the NFL Combine with good reports and looked healthy in an incredible video demonstrating his footwork.

It’s all great news for the Miami Dolphins. Currently projected to land Tagovailoa in the latest mock draft, he should fall right into their lap at the No. 5 pick. After all of the additions they made this offseason, adding a franchise quarterback would be the perfect way to cap off their additions and prepare for a bright future.