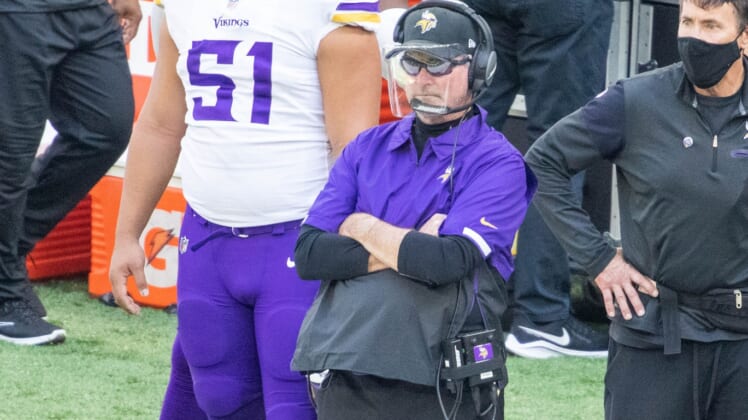 The hot seat for NFL head coaches is heating up after Bill O’Brien was fired and with the Minnesota Vikings sitting at 1-3 on the season, could coach Mike Zimmer be on the chopping block?

Minnesota came into the season with high expectations as many believed the team would be an NFC North contender and a potential playoff team. Instead, the Vikings have looked like one of the NFL’s worst teams. If things don’t improve, at a time when many coaches are on the hot seat, could Zimmer be ousted in Minnesota?

Coming off an offseason that saw the Vikings make significant changes on both sides of the ball, the defense has been especially problematic this season. For Zimmer, a defensive-minded coach, overseeing a unit allowing 31.3 points and 426.5 total yards per game has raised concerns among many fans.

Minnesota escaped Week 4 with its first victory of the season, beating the Houston Texans (0-4) just days after J.J. Watt called out O’Brien. Set to face the Seattle Seahawks (4-0) in Week 5 and with tough divisional games upcoming against the Green Bay Packers and Detroit Lions, things could get even worse for the Vikings.

Fortunately for Zimmer, his job appears to be safe. According to Pro Football Network’s Tony Pauline, it’s highly unlikely that Zimmer is fired this season, even if the Vikings miss the playoffs.

Related: Why it’s too early for Vikings to panic

Despite the team’s struggles, especially defensively, Minnesota provided its coach with security a few months ago. Zimmer signed a multi-year extension with the Vikings in July, a sign that the organization has plenty of confidence in him.

Minnesota also should have seen the issues on defense coming. Zimmer and general manager Rick Spielman overhauled the secondary this offseason, drafting cornerback Jeff Gladney with the No. 31 overall pick and Cameron Dantzler with their third-round selection.

Rookie cornerbacks experience a lot of growing pains in their first NFL season, even more so when they are asked to play significant snaps immediately. It’s also worth noting that Pro Bowl defensive end Danielle Hunter is on injured reserve and linebacker Anthony Barr suffered a season-ending injury early in the year.

Ultimately, the Vikings will likely fall short of the NFL Playoffs this year. If their young defenders improve as the season goes on, that will at least be a positive for Zimmer’s defense moving forward.