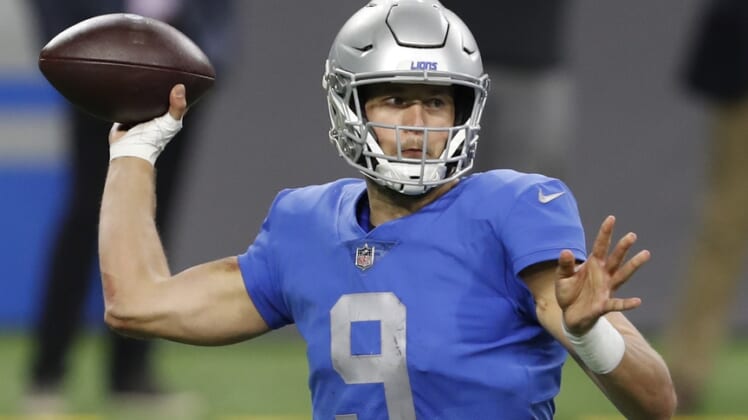 Detroit Lions quarterback Matthew Stafford may be in his final days with the organization. Just a week after asking for a trade, with a number of teams expressing interest, Stafford could soon be the first NFL star moved this offseason.

After the Lions hired Dan Campbell, signing him to a six-year contract, Stafford saw the writing on the wall. Set to enter his age-33 season, the former No. 1 overall pick met with the organization and they both agreed a trade would be in everyone’s best interest.

NFL teams in need of a quarterback started calling immediately. With Detroit fully committed to a rebuild, Stafford could be on the move very soon.

Dave Birkett of The Detroit Free Press spoke to Campbell about the team’s future and the fate of Stafford on Saturday. During that conversation, Detroit’s head coach said trade discussions around the star quarterback are “hot and heavy,” confirming recent rumors.

Furthermore, according to NFL Network’s Ian Rapoport, a trade could happen before Super Bowl LV. Many around the NFL reportedly think this matter is resolved in the coming days, leading to an agreement on a trade sending Stafford to a new team before Feb. 7.

Since Stafford hit the trade market, the San Francisco 49ers and Indianapolis Colts have generated the most buzz as potential landing spots. Both teams have Super Bowl-caliber rosters and are likely just a quarterback away from being legitimate title contenders in 2021.

The Colts started as the favorite for a Stafford trade, allowing Detroit to move him out of the NFC and giving him the best shot to compete for a Super Bowl. However, throughout Senior Bowl practices, more buzz built around the 49ers replacing Jimmy Garoppolo with Stafford.

The acquisition cost to land Stafford is reasonable. He has been an outstanding quarterback throughout his NFL career, lifting a disastrous franchise for more than a decade. With a reasonable contract and plenty of talent still left in the tank, Detroit could net a first-round pick for him.

It’s a matter of when, not if, Matthew Stafford is traded. While the focus this upcoming week will be on Super Bowl LV, this trade could greatly impact next year’s Super Bowl matchup.