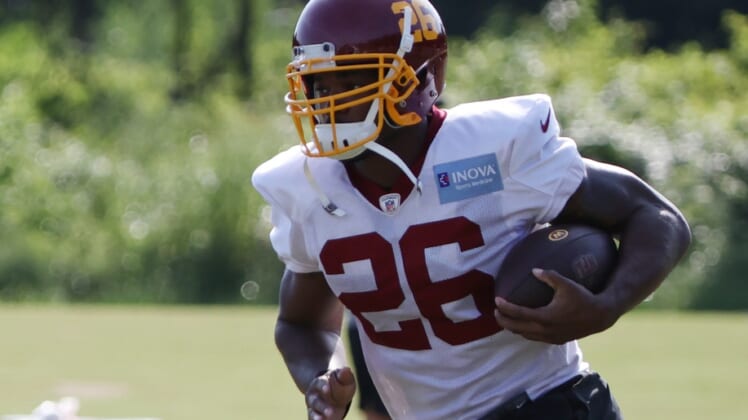 There’s another big name on the free-agent market heading into cut-down day around the NFL on Saturday.

Peterson, 35, is still playing at an incredibly high level despite his advanced age for a running back. The seven-time Pro Bowl performer put up north of 1,000 total yards in each of his two seasons in the nation’s capital.

All said, Peterson tallied 2,290 total yards with 13 touchdowns at a clip of 4.6 yards per touch with the Washington Football Team.

It goes without saying that Peterson is going to have a pretty robust market in free agency with the 2020 NFL regular season slated to start in less than a week. Here’s a look at his five-best potential landing spots.

Las Vegas Raiders: Would be the ultimate Jon Gruden move

We already know that Raiders head coach Jon Gruden loves himself some veterans. Las Vegas had added experienced players at nearly every turn during his second stint with the organization. The expectation is that these Raiders will certainly kick the tires on Peterson.

Second-year back Josh Jacobs is the unquestioned starter and someone who boasts All-Pro upside. Outside of that, the Raiders are lacking depth. Rookie third-round pick Lynn Bowden Jr. is listed as a running back. Though, based on his experience at wide receiver and the season-ending injury to Tyrell Williams, he will more than likely line up at that position. If so, adding Peterson to the mix makes a ton of sense.

Chicago was linked to another big-name running back on the market in that of Leonard Fournette before he signed with the Tampa Bay Buccaneers earlier this week. There’s a reason for this. Matt Nagy has struggled finding the right mix at running back during his mediocre tenure as the Bears’ head coach.

A third-round pick out of Iowa State last year, David Montgomery averaged a mere 3.7 yards per rush as a rookie. He’s currently dealing with a hamstring injury that will cost the young back the first couple weeks of the season. The electric Tarik Cohen is not a three-down back. Obviously, Peterson makes a ton of sense here.

The decision by Super Bowl hero Damien Williams to opt out of the 2020 season threw the defending champs for a loop. Sure Kansas City has a promising young back in that of rookie first-round pick Clyde Edwards-Helaire. He’s still unproven and won’t see action in a real NFL game until the regular season gets going.

Outside of that, there’s not a lot to look at here. No. 2 back DeAndre Washington put up less than 400 yards at a clip of 3.6 yards per rush for the Raiders last season. Needless to say, Peterson would be a marked upgrade for head coach Andy Reid.

Philadelphia Eagles: Philly has been in the market for a running back

Head coach Doug Pederson and Co. will be relying on super sophomore Miles Sanders a whole lot after he gained 1,327 total yards at a clip of 5.8 yards per touch as a rookie.

With that said, Philadelphia has kicked the tires on lesser running backs than Adrian Peterson to help shoulder the load. The future Hall of Famer also seems to be a perfect fit in Pederson’s offense.

New England Patriots: Bill Belichick and Adrian Peterson would be something else

Two future Hall of Famers in the twilight of their careers attempting to make one final run. Both figures having something to prove. The Patriots still in win-now mode after naming former NFL MVP Cam Newton their starting quarterback to replace the departed Tom Brady.

This just makes too much sense, right? On the field, New England is in need of more help at running back. Entering his third season, Sony Michel has been in and out of Belichick’s dog house throughout his young career and is coming off off-season foot surgery. At this point, AD to the Pats needs to happen.