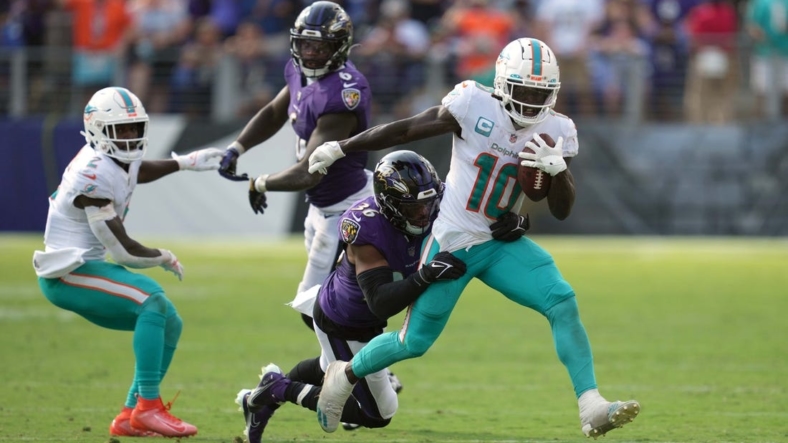 Tua Tagovailoa rallied the Dolphins from a 21-point deficit in the fourth quarter and his sixth touchdown pass of the game with 14 seconds remaining pushed Miami past the host Baltimore Ravens 42-38 on Sunday.

Tagovailoa shrugged off two first-half interceptions and threw a 7-yard laser to Jaylen Waddle for the go-ahead score in the fourth quarter, marching 68 yards in six plays to respond to Justin Tucker’s 51-yard field goal, a kick that gave Baltimore a brief 38-35 lead with 2:18 on the clock.

Tagovailoa completed 36 of 50 passes for 469 yards and six TD passes, tied for the second-most in a single game in NFL history. Waddle and Tyreek Hill had 11 receptions apiece in the game, with Hill totaling 190 yards receiving and Waddle gaining 171 yards. No wide receiver tandem has had 170-plus yards and two touchdowns each in the same game since at least 1950, per the NFL.

In an improbable outcome, Arizona overcame a 20-0 halftime deficit to defeat host Las Vegas in overtime when cornerback Byron Murphy Jr. recovered a fumble and dashed 59 yards for the winning touchdown.

After stopping the Raiders (0-2), the Cardinals drove 73 yards in 18 plays and Kyler Murray scored on a 3-yard run on fourth down with no time remaining on the clock. Murray then connected with wide receiver A.J. Green for the tying points. The drive was extended when Raiders safety Roderic Teamer was called for holding on fourth-and-4 from the 6-yard line with 30 seconds remaining in regulation.

Jimmy Garoppolo came off the bench for an injured Trey Lance and guided San Francisco to a victory against visiting NFC West rival Seattle in Santa Clara, Calif.

Garoppolo completed 13 of 21 passes for 154 yards and a touchdown and also scored on a 1-yard sneak with 1:51 remaining to clinch the victory. The 49ers (1-1) also got key contributions from two other injury replacements. Jeff Wilson Jr. filled in as the lead running back for Elijah Mitchell and had a game-high 84 rushing yards on 18 carries. Tight end Ross Dwelley, subbing in for George Kittle, made a 38-yard touchdown reception and recovered two fumbles.

The Seahawks (1-1) managed just 216 yards of total offense and committed three turnovers. Geno Smith was 24-of-30 passing for 197 yards and an interception.

Nick Chubb scored from 12 yards out for his third touchdown with 1:55 remaining, which seemingly had the Browns (1-1) on their way to their first 2-0 start since 1993. New York got within 30-24 when Joe Flacco found a wide-open Corey Davis for a 66-yard touchdown with 82 seconds left.

The Jets (1-1) then recovered an onside kick by cornerback Justin Hardee at the New York 47 to set up Wilson’s second score of the game. Flacco finished with 307 passing yards and four touchdowns.

Brady completed just 18 of 34 for 190 yards, but Mike Edwards’ 68-yard interception return for a touchdown and Ryan Succop’s pair of 47-yard field goals enabled the Buccaneers (2-0) to end a seven-game losing streak against the Saints in the regular season.

Former Buc Jameis Winston, reportedly playing with four broken bones in his back, completed 25 of 40 for 236 yards for the Saints (1-1). Winston threw three interceptions in the fourth quarter.

Rookie Aidan Hutchinson and the Detroit defense swarmed Washington quarterback Carson Wentz in the first half and then withstood a rally by the visiting Commanders to hold on for a Lions victory.

Jared Goff threw for 256 yards and four touchdowns for the Lions (1-1), including two to Amon-Ra St. Brown, who finished with nine receptions for 116 yards. St. Brown also had a 58-yard run on a fly sweep, which set up a second-half touchdown.

It was St. Brown’s eighth straight game with at least eight catches, which matches an NFL record established by the Steelers’ Antonio Brown in 2014 and matched by the Saints’ Michael Thomas in 2019.

Damien Harris rushed for a 2-yard touchdown three plays after the Patriots recovered a muffed punt to help New England to a victory over host Pittsburgh.

Gunner Olszewski couldn’t handle Jake Bailey’s punt with 4:06 left in the third quarter, and Brenden Schooler recovered to set the Patriots (1-1) up at the Pittsburgh 10 after an unnecessary roughness penalty.

Harris punched it in on third down, but the Steelers (1-1) responded with Mitch Trubisky’s 8-yard touchdown pass to Pat Freiermuth to pull within 17-14. But that was the closest they would get.

Graham Gano kicked four field goals, including a 56-yarder with 3:34 to play, to lift New York over visiting Carolina at East Rutherford, N.J.

The Giants are 2-0 for the first time since 2016. Gano scored 13 of New York’s points against his former team.

Giants quarterback Daniel Jones, playing against his hometown team, completed 22 of 34 passes for 176 yards and a touchdown.

Baker Mayfield completed 14 of 29 passes for 145 yards with a touchdown for the Panthers (0-2). Christian McCaffrey gained 102 rushing yards on 15 carries and added 26 receiving yards on four catches.

Lawrence completed 25 of 30 passes and Christian Kirk caught both touchdown passes for the Jaguars (1-1). James Robinson burst 37 yards for a score.

The best scoring chance for the Colts (0-1-1) stalled out at the 4-yard line early in the fourth quarter due to a sack and an offensive pass interference flag. Another ended at the 8-yard line when Matt Ryan threw a fourth-down incompletion. Ryan completed 16 of 30 passes for 195 yards and three interceptions.

Matthew Stafford threw for 272 yards and three touchdowns and Los Angeles withstood a late rally by visiting Atlanta for a victory in Inglewood, Calif.

Cooper Kupp had 11 receptions for 108 yards and two touchdowns for the defending Super Bowl champion Rams (1-1).

Marcus Mariota pulled the Falcons (0-2) to within 31-17 with an 11-yard touchdown pass to Olamide Zaccheaus with 8:14 left in the game. Troy Andersen blocked Riley Dixon’s punt, with Lorenzo Carter returning it for a touchdown to make it 31-25 after Mariota hit Drake London for the two-point conversion with 4:57 left.

Cooper Rush, who started in place of the injured Dak Prescott (thumb), finished 19-for-31 for 235 yards and one touchdown in his second career NFL start. Rush tossed a 9-yard touchdown pass to Noah Brown to cap a 12-play, 75-yard drive in the first quarter. Brown had five catches for 91 yards for the Cowboys (1-1).

Joe Burrow completed 24 of 36 passes for 199 yards and a touchdown for the Bengals, who fell to 0-2 after representing the AFC in Super Bowl LVI last season.

Russell Wilson was 14-for-31 passing for 219 yards, one touchdown and an interception, Eric Saubert caught a scoring pass, and host Denver beat Houston.

Courtland Sutton had seven receptions for 122 yards and Javonte Williams rushed for 75 yards on 15 carries for Denver (1-1).