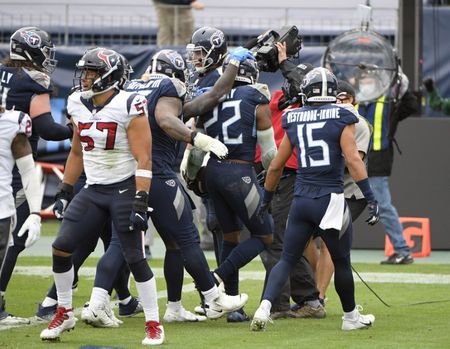 Derrick Henry rushed for 212 yards and two touchdowns, and host Tennessee blew a two-touchdown lead Sunday, only to rally for a 42-36 overtime win over lowly Houston to remain undefeated.

In the extra period, Henry had a 53-yard reception before his 5-yard run ended it.

Deshaun Watson passed for 335 yards and four touchdowns to lead the comeback for Houston (1-5). But Texans interim coach Romeo Crennel made a late dubious decision that proved fatal. When Watson threw a 1-yard touchdown to Brandin Cooks with 1:50 left, the Texans led 36-29. But a failed two-point conversion opened the door for the Titans, and they kicked it in over their last two drives.

Linebacker Tae Crowder returned a fumble 43 yards for a go-ahead touchdown late in the fourth quarter, and New York (1-5) held on for a win over the Washington Football Team (1-5) in East Rutherford, N.J.

Cam Sims scored a touchdown with 36 seconds left to pull Washington within one point, and head coach Ron Rivera decided to go for a two-point conversion rather than settling for an extra point to even the score. The gamble failed as quarterback Kyle Allen threw an incomplete pass on the two-point attempt.

The sequence preserved the game-winning score for Crowder, a rookie from Georgia who received the “Mr. Irrelevant” designation as the 255th and final pick of the 2020 NFL Draft. He made headlines for a much more positive reason as he quickly reacted to Allen’s fumble in the pocket to score with 3:29 remaining.

Bucs quarterback Tom Brady contributed an efficient 17-of-27 performance for 166 yards and two scores, including the 91st touchdown pass of his career to tight end Rob Gronkowski. The 12-yard connection with 1:02 left in the first half capped a 28-point, second-quarter Bucs’ outburst that shaped the game’s remainder.

Brady and Green Bay quarterback Aaron Rodgers were standing on the sidelines in baseball caps before the NFC battle ended. Rodgers was battered after a sharp first two possessions, finishing 16 of 35 for 160 yards, with two interceptions, for the Packers (4-1).

Matt Ryan threw for 371 yards and four touchdowns, and the defense secured three interceptions as visiting Atlanta recorded its first victory of the season by beating Minnesota.

The Falcons (1-5) scored 23 unanswered points to open the game, their first under the direction of interim coach Raheem Morris, who replaced the fired Dan Quinn this week. Younghoe Koo kicked field goals of 50, 21 and 47 yards during the run. Julio Jones had eight catches — two for touchdowns — for 137 yards.

Minnesota (1-5) did much of its damage with 16 fourth-quarter points. Quarterback Kirk Cousins completed 24 of 36 passes for 343 yards and three touchdowns, but also had three first-half interceptions that Atlanta turned into 17 points for a 20-0 halftime lead.

Lamar Jackson threw for one touchdown and ran for another as Baltimore bolted to an early lead before holding on to beat host Philadelphia.

Jackson completed 16 of 27 passes for 186 yards and added 108 yards on just nine carries for the Ravens (5-1), who won their third in a row. Kicker Justin Tucker contributed three field goals.

Carson Wentz hit on 21 of 40 throws for 213 yards with two touchdowns for Philadelphia (1-4-1), which dropped its second straight game. Wentz nearly pulled out a dramatic finish by leading two touchdown drives in the last 3:48. He scored from 1 yard with 1:55 to pull the Eagles within two points, but his 2-point conversion run to tie the game was snuffed out at the line of scrimmage by Matthew Judon. The Eagles fell to 0-3 at home and were booed for most of the day.

James Conner rushed for 101 yards and a touchdown as host Pittsburgh dominated AFC North rival Cleveland to improve to 5-0 for the first time since 1978. Cleveland (4-2) had its four-game winning streak snapped.

Pittsburgh’s Ben Roethlisberger was 14 of 22 passing for 162 yards, including a 28-yard scoring pass to James Washington. Chase Claypool and Benny Snell Jr. also each ran for a touchdown. Minkah Fitzpatrick had an interception return for a touchdown.

The Steelers’ defense dominated. The Browns, who entered as the NFL’s top rushing team, were held to 75 rushing yards, and Cleveland was 1-of-12 on third-down conversions.

Nick Foles threw for one touchdown and ran for another as Chicago never trailed in defeating host Carolina.

The Bears (5-1) managed only 261 yards of total offense in picking up their third road victory of the season. Foles completed 23 of 39 passes for 198 and also threw one interception. David Montgomery added 58 yards rushing and Cairo Santos kicked three field goals.

Panthers quarterback Teddy Bridgewater was 16-for-29 for 216 yards with two interceptions for the Panthers (3-3), who had 303 yards of total offense as their three-game winning streak was snapped. Mike Davis had 52 rushing yards and a score for Carolina, which played its fourth game in a row without injured running back Christian McCaffrey (ankle).

Matthew Stafford passed for 223 yards and a touchdown for the Lions (2-3), while Kenny Golladay caught four passes for 105 yards. Stafford completed passes to 10 different receivers.

Gardner Minshew passed for 243 yards and a touchdown and also had a rushing touchdown for the Jaguars (1-5), who have lost five straight.

Philip Rivers passed for 371 yards and three touchdowns and Julian Blackmon came up with a critical late interception to lift Indianapolis over visiting Cincinnati.

The Bengals (1-4-1) had a chance to steal the win late, but Blackmon intercepted Cincinnati rookie quarterback Joe Burrow at the Colts 19-yard line with 46 seconds left to seal it. Burrow passed for 313 yards and scored on a one-yard touchdown run, posting his fourth 300-yard passing day in six games. But it wasn’t enough at the Bengals saw their winless road streak extend to 17 games.

Brandon McManus kicked a franchise-record six field goals — the longest from 54 yards — to lift visiting Denver over New England in a game originally scheduled for Oct. 11 due to several COVID-19 cases in the Patriots’ organization.

Phillip Lindsay rushed for 101 yards in his return to the lineup from a toe injury, and Drew Lock completed 10 of 24 passes for 189 yards and two interceptions in his first game since suffering a right-shoulder injury on Sept. 20. Tim Patrick had four catches for 101 yards for Denver (2-3).

Quarterback Cam Newton ran for 76 yards and a touchdown and went 17-for-25 passing for 157 yards, with two interceptions, for the Patriots (2-3). James White finished with eight receptions for 65 yards.

It was Miami’s first shutout over New York since the 1982 postseason, and the game also marked the NFL debut of rookie first-round pick Tua Tagovailoa, who went 2-for-2 for 9 yards in garbage time for Miami (3-3).

New York (0-6) is the only winless team in the NFL, and Sunday’s loss amped up the pressure on Jets coach Adam Gase — formerly of the Dolphins — who is considered on the hot seat to be fired.

George Kittle caught seven passes for 109 yards and one touchdown to spark a 49ers offense that did most of its damage in the first half en route to a 21-6 lead. Garoppolo’s big first half featured TD throws to Deebo Samuel for six yards, Kittle for 44 and Brandon Aiyuk for two. He went 17-for-21 for 215 yards in the half without an interception.

The San Francisco defense, which was last seen serving up 436 yards and 43 points in a blowout home loss to the Miami Dolphins last week, slowed the Rams in large part by limiting Jared Goff, who finished with 198 passing yards on 19 of 38 completions. The 49ers improved to 3-3, while the Rams fell to 4-2.