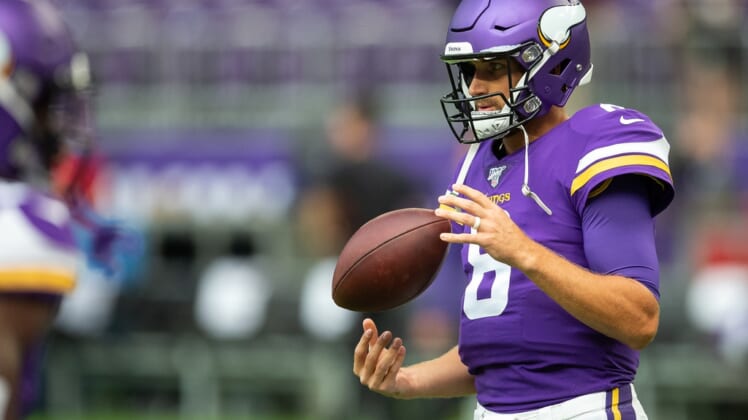 The NFL preseason is nearly over now after Week 3, and we won’t likely see starters again until the regular season opens up in September.

For most teams, this past weekend of action represented the best chance to showcase their potential. The dress rehearsal went great for some, but for others it was a sobering wake-up call.

These were the biggest winners and losers from NFL preseason Week 3.

The New York Giants selected Oshane Ximines out of Old Dominion in the third round this past April. Based on what we’ve seen out of this young man, he could be making a first-round impact on the G-Men in 2019.

Following up a two-tackle, one-sack performance in Week 2, the rookie exploded with four tackles and two sacks against Cincinnati Thursday night.

Oximines has gotten better and more productive in each of the team’s three preseason games this summer. Watch out for this guy to make a major mark on New York’s defense this season.

Cam Newton finally got into his first preseason game of the summer Thursday against New England. The Panthers had held him out previously as a precautionary measure following offseason shoulder surgery. They likely rue the decision to play him at all, as Newton suffered a foot injury on the third drive of the game and may not be ready to play in Week 1.

Newton was in the game for a grand total of 10 plays. On those plays, he was sacked twice, including on the one that left him injured. The biggest issue the Panthers have had on offense the past few years is protecting their franchise quarterback. Clearly, those issues persist in 2019. If they continue to be a problem going forward, Newton will continue to get banged up. It’s as simple as that.

The Philadelphia Eagles got an absolute steal landing Arcega-Whiteside toward the end of Round 2 this past April. The No. 57 overall pick out of Stanford is a red-zone dynamo, and his prowess on deep passes in college was breathtaking to behold.

After a couple of two-reception performances in the team’s first preseason games, Arcega-Whiteside showed his full potential in Week 3 against Baltimore.

Hauling in eight receptions for 104 yards and a touchdown, this rookie made his impact felt in a big way. He’s going to be an immediate contributor this season.

The past couple of weeks, Josh Rosen has vastly outplayed Ryan Fitzpatrick. Yet the Miami Dolphins are still in quarterback limbo because rookie head coach Brian Flores seems to be balking at letting Rosen take control of the offense.

During the team’s Week 3 preseason game, Fitzpatrick got the start. Quite simply, he was atrocious, completing 5-of-11 passes for 33 yards, with 28 of those yards coming on one completion to tight end Mike Gesicki. Fitzpatrick came out in the third quarter and finally put up a respectable stat line. But that was against second and third stringers.

Josh Rosen has been consistently better this preseason. But the Dolphins seemingly don’t want to let him play, despite trading a second-round pick to land him this past April.

The Cleveland Browns are a trendy Super Bowl pick this year, thanks in large part to their star-studded offensive lineup. But if they do live up to the hype, it’s going to be because of their defense, which looks downright terrifying.

The Browns laid waste to Tampa Bay’s offensive line on Friday night. Jameis Winston was sacked five times in the first half. He also finished having completed less than half his passes and averaged 4.6 yards per attempt. The Bucs have a problem up front, to be sure. Exasperating that problem in Week 3, however, was Cleveland’s defensive front.

Perhaps we can chalk it up to Cousins playing in a nationally televised game. Perhaps it was due to the absence of Adam Thielen. Whatever the reason, Kirk Cousins was godawful against a sketchy Arizona defense on Saturday.

How bad was he? Showing startlingly poor accuracy, Cousins completed just 3-of-13 passes for 35 yards, netting 24 yards when you account for his two sacks.

It was just over a year ago that Minnesota gave Cousins what was at the time the richest guaranteed contract in NFL history. Then he led a team that missed the playoffs last year. Safe to say, he’s in danger of becoming one of the biggest free agent busts in the modern NFL.

It’s tough to make it in the NFL, no matter a player’s size. But when guys are as small as undrafted rookie Deonte Harris (5-foot-6 and 170 pounds), it takes some special skill to crack a roster.

Harris has plenty. He’s making his mark as a special-teams ace and ripped off a tremendous 78-yard punt return for touchdown against the New York Jets Saturday.

A player who holds the NCAA Division II record for most combined return touchdowns, Harris certainly is electric. He also appears to be a lock to make New Orleans’ final roster.

Loser: Darrell Henderson failing to live up to hype

Coming out of Memphis this past spring, Henderson was seen as a potential game-changing talent by many. Certainly, his ability to make house calls on a regular basis in college was a big reason the Los Angeles Rams selected him in the third round, with general manager Les Snead comparing him to Alvin Kamara.

With a decent sample size at the NFL level, it’s fair to say Henderson has struggled. He’s carried the ball 27 times in three games, gaining 57 yards. In Week 3, he got his biggest workload of the summer but managed just 28 yards on 11 carries. Henderson can still become a dangerous weapon for the Rams. But so far, he’s been underwhelming, to say the least.

For the first time this preseason, Ben Roethlisberger played, along with Pittsburgh’s entire starting offense. He made a couple of poor throws in the rain, but overall Roethlisberger looked rock solid completing 8-of-13 passes for 63 yards. He also threw a dime to JuJu Smith-Schuster, who scored an easy 18-yard touchdown in the first quarter.

The Steelers also looked good on the ground. James Conner rushed for 41 yards on five carries and hauled in a couple of receptions for 15 yards. Given the development of James Washington during the summer, this offense has explosive potential and could be much more dangerous than it was last year.

Defensively, Pittsburgh did what it’s done all summer long — dominate the opponent. The Tennessee Titans were helpless to get anything going while the Steelers had their starters in the game. If health holds, Pittsburgh has the potential to be very good in 2019.

Loser: NFL in Canada was a disaster

Even a couple of weeks before the Green Bay Packers and Oakland Raiders were set to play their preseason game in Winnipeg, Canada, it was clear the game would not be the international success the NFL hoped it would be.

Then, before the game, a hole in the turf inside one of the end zones turned this game into an international laughingstock. The two teams played on an 80-yard field, and both teams sat most of their top players due to safety concerns.

Just a big black eye for the league. Let’s not let it happen again, okay, NFL?