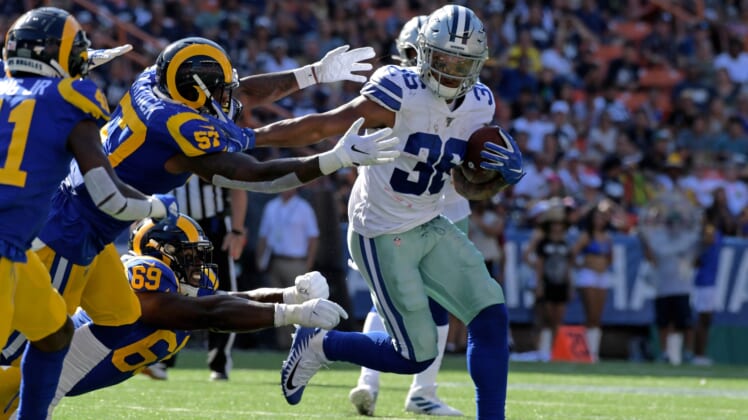 Cut day is coming soon, and teams are beginning to get a glimpse of what their final rosters may look like following a full slate of games in NFL preseason Week 2.

Many of the league’s young quarterbacks have been shining brightly so far this preseason. Though, one of the most prominent had a humbling experience in Week 2.

A team that struggled last year appears to have some pieces in place to make a run. Meanwhile, last year’s highest-scoring offense was stuck in reverse.

These are among the biggest winners and losers from the NFL preseason Week 2 action.

Winner: Dwayne Haskins may win the starting job after all

Heading into Week 2 of the preseason, Washington Redskins head coach Jay Gruden hinted that his first-round rookie still had time to earn the starting job. Haskins’ NFL debut went poorly, but on Thursday night against Cincinnati, he rebounded with a strong showing.

Though Haskins completed just half his passes, he averaged 8.14 yards per attempt and heaved one of the most impressive touchdowns we’ve seen all preseason. Keenum, meanwhile, struggled in limited action, completing 3-of-7 passes. If Haskins shines in Week 3, then the starting job may be his come Week 1.

There is no way to soften the blow here: Murray’s second preseason game was a stinker, in every way conceivable. Following up a stellar debut in Week 2, Murray was humbled during his time on the field against the Oakland Raiders. He completed just 3-of-8 passes for 12 yards, took a bad safety which led to him finishing the night with a net minus-two yards passing, and was responsible for two false start penalties.

There’s no reason to panic. One short, poor outing isn’t going to define what we should expect to see from the No. 1 overall pick out of Oklahoma. Yet it did prove that, despite his vast reservoir of talent, Murray is going to struggle at times.

It’s too early to get overly excited about the development of quarterback Josh Allen. Yet it’s undeniable that the second-year starter has developed a level of comfort in the pocket, and with Buffalo’s offense as a whole, that we never saw last season.

On Friday night, Allen was nearly perfect, completing 9-of-11 passes for 102 yards while showing an affinity for slot specialist Cole Beasley and tight end Tommy Sweeney. It’s starting to look like Buffalo may really have something special brewing this season.

Loser: Atlanta’s offense has a problem

The Atlanta Falcons have invested heavily in their offensive line the past couple of years. Yet on Thursday night against the New York Jets, the starting unit was utterly dominated by New York’s defensive front seven. Matt Ryan was sacked three times in limited action, and the running game struggled to generate any consistent gains.

Jets defensive coordinator Gregg Williams was calling plenty of blitzes, which heavily contributed to the confusion up front. Yet Atlanta must be better than this before the regular season kicks off. Week 1 isn’t far away now, so improvements must be made soon.

Dallas Cowboys owner Jerry Jones has increasingly upped the ante with his rhetoric in regards to the Ezekiel Elliott holdout situation. Prior to the team’s Week 2 preseason game, he had stated that rookie Tony Pollard is capable of “carrying the whole load” as Dallas’ featured running back.

On Saturday, Pollard made Jones look good, going for 42 yards and an impressive touchdown on just five carries. He also caught the only pass that came his way, gaining nine yards. More importantly, Dallas’ starting offense marched 97 yards down the field for a touchdown on its only drive of the game.

Afterward, Jones jokingly said, “Zeke who?” discussing his holdout running back. That would not have happened if Pollard didn’t ball out.

Matthew Stafford didn’t play Saturday against Houston. Starting in his stead, Josh Johnson was atrocious. The veteran journeyman backup completed just 9-of-18 passes for just 85 yards with no touchdowns an one interception. Granted, he had some passes dropped by his receivers, but overall Johnson was nowhere close to being sharp.

The good news is that Stafford is one of the NFL’s most reliable iron men. The bad news is that if he ends up suffering an injury this year, Detroit doesn’t have anyone on the roster capable of winning consistently.

Derek Carr only threw two passes Thursday night in Arizona. But he made both of them count, tallying 40 yards and a touchdown on the first drive of the game for the Oakland Raiders. On that same drive, rookie Josh Jacobs ripped off a couple of nice runs as Oakland’s offense shredded Arizona’s defense.

Once backup Mike Glennon took over, it was more of the same. He passed for 175 yards and two touchdowns on 11-of-14 attempts.

Head coach Jon Gruden was known as an offensive guru early in his career. After a rough first year back in Oakland, it appears he may have the Raiders back on track with an explosive offense in 2019.

Loser: Ryan Fitzpatrick did not have the magic

The Miami Dolphins have quite the quarterback competition brewing between Josh Rosen and Ryan Fitzpatrick. The veteran had been getting most of the first-team reps throughout the offseason. Yet this past week leading up to Friday night’s game against Tampa Bay, Rosen was working with the first-team offense. Then, he started the team’s second preseason game and played the entire first half — showing out quite well despite Miami’s awful offensive line.

When it was Fitzpatrick’s turn to play with the reserves, he struggled, putting it mildly. Dropping back 10 times, he took one sack and completed 3-of-9 passes for just 20 yards. Head coach Brian Flores said Fitzpatrick will “probably start” the third preseason game. He’s been awful through two games, completing 35.7% of his passes. Another poor outing will likely result in Rosen winning the job.

Former Ohio State star Cardale Jones hasn’t found much success at the NFL level since being selected in the fourth round of the 2016 NFL Draft. Following his tepid tenure with the Buffalo Bills, he’s been relegated to third string with the Los Angeles Chargers.

Yet on Sunday, Jones came into the game fairly early after Tyrod Taylor and did nothing but impress. Playing nearly a full half, he completed 10-of-14 passes for 111 yards. Even better, he didn’t turn the ball over and threw an absolutely gorgeous touchdown pass under pressure.

This is the type of play the Chargers would love to see consistently from Jones. Talent has never been an issue for him, but consistency has. Including this outing, Jones has now played well two games in a row. That’s very encouraging.

First, he got by Shaquill Griffin and made a gorgeous over-the-shoulder catch for 34 yards.

On the next play, second-year corner Tre Flowers clearly put a hand on one of Thielen’s arm on a deep pass down the seam, which drew a flag.

The reason these two plays stand out like a sore thumb is that Seattle enters the 2019 season without Earl Thomas for the first time since he was drafted. Kam Chancellor is retired, and Richard Sherman is in San Francisco. It’s all about the young guys now in Seattle’s secondary, which clearly is still a work in progress.