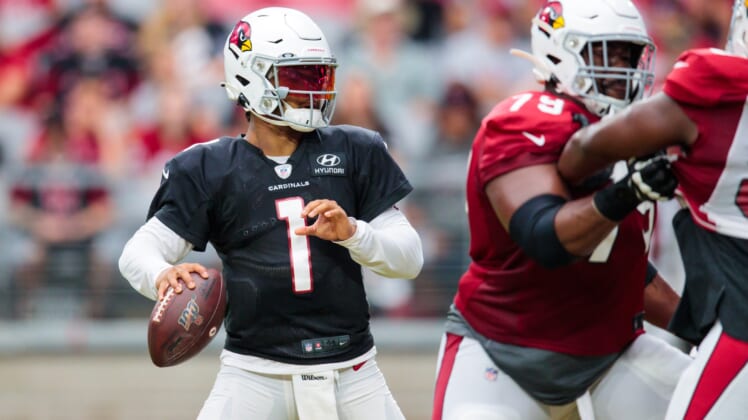 The NFL Hall of Fame Game has come and gone, and now the rest of the league is gearing up for preseason Week 1. There are some exciting players set to make their NFL debuts this coming week, along with others who have prime opportunities to make their mark this preseason.

With that in mind, we’re diving into 10 players who deserve our attention in NFL preseason Week 1.

Buffalo landed a potential star in the third round selecting Singletary out of Florida Atlantic. So far, the reports coming out of Bills training camp have been positive, with Singletary earning plenty of first-team reps. He has also earned praise from future Hall of Famer Frank Gore, who said Singletary has “great vision, doesn’t waste his time, gets in and out of his cuts. He’s got a great shot,” per the Sun-Sentinel. If Singletary can continue impressing this summer, it would not be shocking if Buffalo ended up releasing LeSean McCoy to save roughly $6.4 million against the cap.

Reportedly, there isn’t really a quarterback competition between Jones and Eli Manning for the starting job. Yet the Giants continue to effusively praise the rookie out of Duke, and reports coming in from the practice field have been consistently positive as well. All it’s going to take for this supposed non-competition to heat up to a boiling point is for Jones to tear it up during the preseason. If Manning doesn’t light it up when he plays, the situation will become even juicier. Needless to say, we’re going to be keeping our eye on Big Blue this summer.

Entering his third year out of Florida, this former second-round pick has a chance to emerge as the team’s undisputed starter opposite star Darius Slay. Tabor started one game as a rookie and four last year. The Lions are hoping he can take the next step in 2019. Recently, head coach Matt Patricia praised Tabor, particularly highlighting his “mature approach,” per MLive.com. Unfortunately, he then had what was described as “maybe his worst practice of camp” immediately afterward. It’s time for Tabor to consistently excel, which has been his biggest challenge as a pro.

During the spring, veteran Ryan Fitzpatrick was consistently showing up his second-year teammate during OTAs and minicamp practices. More recently, however, Rosen has been putting himself back on the map as a potential starter for the Dolphins in Week 1 with rock-solid training camp practices. Head coach Brian Flores told members of the media that Rosen has made improvements “across the board,” per the Miami Herald, while making it clear the competition is still wide open. A Thursday night battle against a talented Atlanta secondary is up next. Rosen has a real chance to close the gap.

Last year, Kumerow emerged as a potential diamond in the rough for Green Bay, catching eight passes for 103 yards and a touchdown late in the year. A former undrafted rookie out of Wisconsin-Whitewater in 2015, he’s been the talk of camp lately and wowed during Green Bay’s recent Family Night practice. Outside of Davante Adams, there really isn’t a locked-in pecking order for Green Bay’s receivers. If Kumerow continues to impress this season, he should become a key playmaker for the Packers in 2019.

Through not fault of his own, Ferrell will have an uphill climb all season after the Raiders selected him No. 4 overall this past April. Widely considered a reach, the former Clemson pass rusher has a lot to live up to. So far, the Raiders are happy with what they’ve seen from Ferrell. Defensive coordinator Paul Guenther said the rookie has been “exactly what we thought he was” and is capable of being an “every-down end,” per NBC Sports Bay Area. Now it’s time to prove it on the field.

Last season, Washington had an up-and-down rookie campaign, catching just 16 passes for 217 yards and one touchdown. Though, he did give the Steelers a glimpse into his explosive potential, to be sure. Teammate JuJu Smith-Schuster recently gushed over Washington and predicted he will “sneak up on everybody” in 2019. Without Antonio Brown dominating the action, Washington will have a shot to do just that.

The Bucs surprised a lot of people using the 39th overall pick this past April to select Murphy-Bunting out of Central Michigan. Based on the early observations from training camp, it appears the rookie was well worth the draft slot. Bailey Adams of Bucs Nation recently shared that Murphy-Bunting has been “flying to the ball and making an impression on just about everyone watching.” With a Friday night date against the explosive Pittsburgh offense, he’ll have a prime chance to show off his skill against another NFL team for the first time.

Ezekiel Elliott is holding out for a new deal. Based on recent comments made by team brass, he could be away from Dallas for quite some time. In the meantime, there’s a tremendous competition brewing at running back. Signing veteran Alfred Morris was a clear indication that Dallas isn’t convinced any of their backups can carry the load. Weber, who was a big play waiting to happen at Ohio State, will get plenty of opportunities to show he’s more than a one-trick pony during the preseason.

Already the undisputed starter in Arizona, Murray will finally appear in his first NFL game after being selected No. 1 overall in April. It’s a pretty big deal on a national scale. Murray obviously has the skill to compete at the highest level, yet many question whether he can succeed in the NFL due to his diminutive stature. On the positive side, many are eager to see Murray running a wide-open spread offense, which his teammates have absolutely gushed about this offseason. The potential for big plays on a regular basis makes Murray and the Cardinals must-see TV this year.