Ranking all 8 remaining quarterbacks in the NFL Playoffs 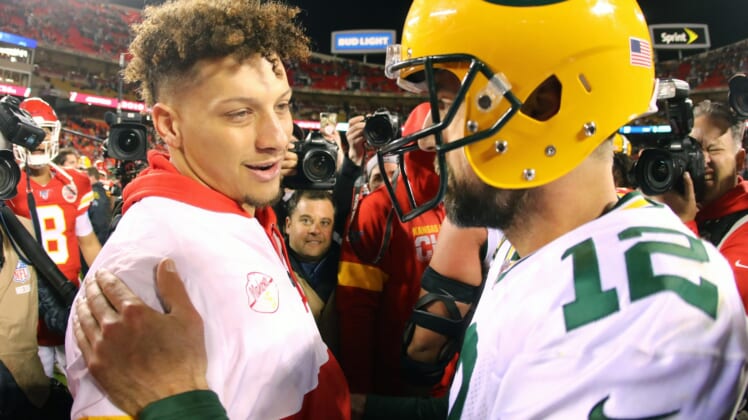 The NFL playoffs carry a lot of interest. It’s the first time the NFL is using the new format, it’s a COVID-impacted year, one of the top quarterbacks ever in that of Tom Brady left the New England Patriots and, of course, the Cleveland Browns made the playoffs for the first time in what feels like forever.

There has been a lot of conversations around quarterback play this season, too. Ben Roethlisberger‘s four interceptions cost his Pittsburgh Steelers a win against Cleveland in the wildcard round. Meanwhile, Lamar Jackson’s impressive showing helped catapult the Baltimore Ravens over the Tennessee Titans.

With Brady and Drew Brees continuing to impress in their veteran careers and Josh Allen continuing to make a name for himself among the NFL’s best, we rank the best remaining quarterbacks in the NFL Playoffs.

Ranking all eight remaining quarterbacks in the NFL Playoffs

Jared Goff ranks low on this list primarily because he had to show up against the Seattle Seahawks and play hurt. Sure, they pulled off a big upset, but Goff playing hurt doesn’t bode well for the remainder of these playoffs. Heading into a matchup against Aaron Rodgers and the Green Bay Packers, Goff’s questionable health gives the Rams a huge disadvantage.

Even if he is healthy, Goff (despite his Super Bowl appearance) has not yet proved he can be a reliable leader as a quarterback. He’s now thrown five touchdowns against five interceptions in his past six starts. Ouch.

Baker Mayfield and the Cleveland Browns have enjoyed a better season than anyone ever could’ve predicted. They pulled off a huge upset over the Pittsburgh Steelers despite losing both their head coach, Kevin Stefanski, and their longest-tenured player, Joel Bitonio, to COVID. Mayfield played an excellent game, but questions about his ability to perform under pressure still plague him.

He had a respectable 62.76 completion percentage, but only threw for 26 touchdowns during the regular year. Moving forward, it’s up to Baker to prove that it’s not the running game carrying the Cleveland Browns. Right now, he’s still one of the bottom quarterbacks remaining in the NFL Playoffs.

Lamar Jackson went through a lot this season, with COVID plaguing the Baltimore Ravens and Jackson himself suffering through the virus. But, no one can deny his remarkable talent. He can rush and he can pass, often putting the team on his back and winning games when it counts. But, he went into the 2020 playoffs without a single postseason victory.

Questions around his ability to win when it counts arose again, and the whispers that have plagued him for his entire career found their way to his postseason showing again. With that said, Jackson showed poise and maturity in the Ravens’ victory over the Tennessee Titans. Heading into the divisional round of the NFL Playoffs against the Buffalo Bills, Jackson will have to continue with that attitude.

Everything about the Bills’ 2020 season has been a dream, due largely to Josh Allen’s leadership. He’s racked up 37 touchdowns and only 10 interceptions in the regular season. He also completed nearly 70% of his pass attempts, ending the season with an overall quarterback rating of 107.2. Running the ball isn’t an issue for Allen, either–he added another eight rushing touchdowns and 421 rushing yards onto his year-end tally. Allen has shown he’s the real deal, and he and Stefon Diggs make one heck of a combination. Look for Josh Allen to play some excellent football in the Bills’ matchup against the Baltimore Ravens. He certainly is one of the top-five quarterbacks remaining in the NFL Playoffs.

Veteran Drew Brees has shown no signs of slowing down after his 42nd birthday. Despite suffering a rib injury that would’ve kept many other quarterbacks out for the season, Brees stepped back into the Saints’ lineup without missing a beat. Despite now being a substantial amount of touchdowns behind Tom Brady’s all-time passing record, Brees has shown he is a consistently solid quarterback who is more than capable of leading a team.

Throwing to Michael Thomas doesn’t hurt, either. Look for Brees to bring his top game into the Saints’ divisional round matchup against Brady and the Buccaneers, as Brees vies to beat Brady three times in a season.

Arguing that Tom Brady is not the best quarterback to ever play in the NFL is futile. Anything he does at this point is just gravy to his impressive resume. His record-breaking end to the season proved that he is, indeed, the ageless wonder. As he gears up to play in the 2021 season, when he’ll be 44, he’s fine-tuning his play with the Buccaneers and racking up beautifully executed wins.

Brady in the playoffs, of course, is a whole other monster. He is now the oldest player to ever throw a touchdown pass in the history of the NFL Playoffs after throwing two against Washington. It’s hard to bet against a guy who has six rings under his belt and an excellent band of high-quality receivers to throw to.

The defending Super Bowl champion has pulled off another near perfect season. He makes everything he does look easy. Mahomes threw 38 touchdowns and only six interceptions, finishing with an overall quarterback rating of 108.2, during the regular year. It’s incredibly difficult to win back to back Super Bowls in the NFL, but Mahomes’ consistently solid play, combined with high quality teammates like Travis Kelce and Tyreek Hill, make the Chiefs a scary team to compete against.

Mahomes has a vision unlike almost any of the other quarterbacks in the league, and can throw long passes without issue. He’s cool and collected in pressure situations, and is a stellar all-around quarterback.

Aaron Rodgers had one heck of a season in Green Bay. Throwing to Davante Adams made for impressive seasons for both the quarterback and the receiver. Rodgers was most definitely back to his MVP-caliber form. He glided through the regular season, helping to secure his team a bye week, despite voicing his unhappiness with aspects of the Packers’ organization and the conduct of the league this season.

But, his resurgence of superior play makes Green Bay serious Super Bowl contenders for the years to come. He has been one of the most consistently incredible players this season, racking up 48 touchdowns and only five interceptions. With precise, nearl perfect play, it’s hard to not have Rodgers as the frontrunner in the quarterback position moving forward in the NFL Playoffs.