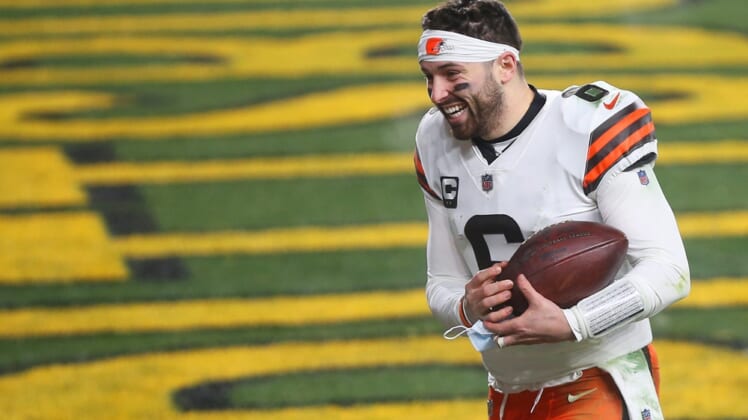 NFL Playoff odds and point spreads are here for the divisional round this coming weekend. They can’t be considered too surprising. Fresh off their bye in the wildcard round, the defending Super Bowl champion Kansas City Chiefs boast the biggest point spread of the weekend against the upstart Cleveland Browns. Meanwhile, the Green Bay Packers are seven-point favorites against the Los Angeles Rams.

In the two other games, we can expect close affairs with the point spreads being much more narrow. That includes the Bills at -1.5 against Lamar Jackson and the Ravens. As for the other NFC game, the New Orleans Saints are three-point favorites over the Tampa Bay Buccaneers.

Below, we give you NFL Playoff odds and point spreads for all four games in the divisional round with interesting blurbs the bettor inside of you might want to know.

Update: Jared Goff expect to start for the Rams

Rams quarterback Jared Goff has been abysmal since starting the season off strong, leading to renewed questions regarding his status as the Rams’ future at this position. Over the course of his past nine starts, last week’s win over the Seahawks included, Goff has thrown nine touchdowns while committing 13 turnovers.

Related: Why a Jared Goff trade makes sense in 2021

What’s equally troubling here for the Rams when we look at their NFL Playoff odds this January is the fact that Goff has tallied 14 touchdowns against 14 turnovers in his past 12 road starts dating back to last season.

Given the nature of the injury to his throwing thumb, it really is hard to imagine Goff being able to keep pace with Aaron Rodgers in the Wisconsin winter at Lambeau Field. This is magnified by the fact that Green Bay won its final four regular-season home games by an average of 16 points. Take the Packers and the points here. Don’t think twice about it.

How good has Western New York treated the Bills since a Week 6 home loss to the Kansas City Chiefs? It’s pretty darn remarkable. And it has us thinking Buffalo’s NFL Playoff odds, at least until the conference championship game, are pretty darn good. Buffalo is 6-0 in its past six home games. The team is averaging 36 points and a resounding 380 total yards per game during that span.

Despite the Ravens’ recent hot streak (six-game winning streak), this has us questioning the point spread with Buffalo at a -2.5. Last week’s win over the Titans included, the Ravens are 7-2 away from M&T Bank Stadium. However, four of those wins came against the Eagles, Texans, Bengals and Washington Football Team (19-43-2 combined record). It’s going to be a whole new ball game against the red-hot Bills. Expect Josh Allen and Co. to cover here.

Consider this. Kansas City finished the regular season 14-2 following a Week 17 loss to the Chargers with their starters resting. The Chiefs’ final seven wins of the season came by an average margin of 4.5 points per. This has not been the dominant Patrick Mahomes-led team we have seen in recent season. It could also have us questioning the defending champs NFL Playoff odds heading into Sunday’s game against an upstart Browns team.

At the very least, there’s an open question whether this 10-point spread is based more on reputation than anything else. After blowout losses against the Ravens and Steelers earlier in the season, Cleveland final three losses during the regular season came by an average of seven points. This represents some food for thought. While it still makes sense to go with Kansas City here, avoid the points.

Oh, what a tangled web we weave when attempting to analyze this game from a betting perspective. Drew Brees has been absolutely brilliant at home in his career, winning 65% of his starts at the Superdome. He’s also 7-2 at home with 19 touchdowns against four interceptions in the playoffs. Heck, Brees and his Saints handled Tampa Bay during the regular season. That included New Orleans outscoring its NFC South counterparts by a combined margin of 72-25 in two games.

Then, we have one Tom Brady. He just recently became the oldest quarterback to throw a touchdown in the history of the postseason. NFL Playoff odds have also favored Brady during an illustrious career that has seen him win six Super Bowl. At issue here for Mr. Brady is his career 5-4 postseason record away from Gillette Stadium (not including the Super Bowl, of course). He’s 20-4 in New England. Despite this, I am willing to go against the grain and pick a minor upset. It really is hard to bet against GOAT, even if it could mean Drew Brees’ final game as an NFL quarterback.