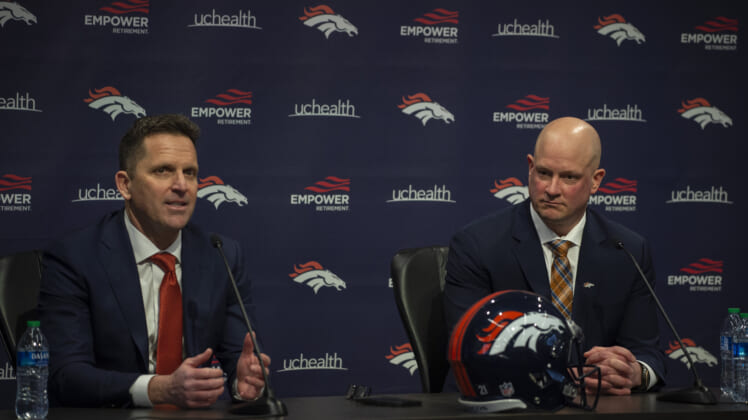 The NFL offseason got off to a rip-roaring start with multiple blockbuster trades before free agency officially opened. That included both Russell Wilson and Carson Wentz being dealt.

From there, things spiraled into a frantic pace. Big names came off the board during the tampering period. Others were traded as teams with a ton of cap space upgraded their roster.

Even with a ton of time left for other big moves, we figured it made sense to check in on the six best moves thus far during the offseason.

The defending champs quickly pivoted from Von Miller to other areas of “concern” once the edge rusher opted to sign with the Buffalo Bills. For Los Angeles, this type of proactive mentality has come to define general manager Les Snead’s tenure in Southern California.

That included the Rams signing star wide receiver Allen Robinson to a three-year, $45 million contract. The deal came completely out of left field with holdovers such as reigning NFL Offensive Player of the Year Cooper Kupp, Robert Woods and Van Jefferson on the roster.

Sure Robinson had his struggles with rookie Justin Fields tossing him the rock in Chicago last season, but that’s more on Fields’ development (or lack thereof) with the Bears. He’ll join Matthew Stafford to play with the best quarterback he has had in his career.

Meanwhile, the contract still leaves open a real possibility Odell Beckham Jr. re-signs with the Rams in free agency. While the Rams were out being proactive and pretending like the NFL salary cap doesn’t exist, the division-rival San Francisco 49ers called a press conference for signing Oren Burks. Who? Yeah, that’s a major win.

For most of the NFL free-agent tampering period, it seemed like this two-time Super Bowl winner would either re-sign with the Los Angeles Rams or make his way to the Dallas Cowboys. That’s why it was so shocking that the 32-year-old Miller opted to sign with Buffalo.

To be perfectly clear, this was a major need for Buffalo after it struggled from a pass-rush standpoint a season ago. It’s one of the primary reasons Patrick Mahomes lit up this unit in the AFC Divisional Playoffs. Free agent Mario Addison led the team with seven sacks while no other member of this unit had more than four.

Some will point to the $120 million figure and conclude that general manager Brandon Beane overpaid for a 32-year-old pass rusher with a growing injury history. But it’s always in the details. Technically, this is nothing more than a three-year, $51.44 million contract. That’s about what Chandler Jones received from the Las Vegas Raiders. It’s a steal.

Eagles general manager Howie Roseman knows full well that he has three first-round picks heading into the 2022 NFL Draft. There was no real reason to overpay at areas of need. Finding positional value had to be Roseman’s overriding goal.

Boy, did he land that in this former top-13 pick of the Arizona Cardinals. Philadelphia signed Reddick to a three-year, $45 million contract with a total of $30 million in guarantees. Only 27 years old and just now entering his prime, Reddick has proven that he can be a legitimate threat out on the edge.

The Temple product has recorded 34 quarterback hits, 27 tackles for loss and 23.5 sacks over the past two seasons. It’s not a coincidence that Reddick turned things around when he was moved from inside linebacker to his more natural pass rush position. It will end up being a boon for Philadelphia moving forward.

We have to hand it to Colts general manager Chris Ballard for admitting his mistake after just one season. There’s been continued reports around NFL circles that Carson Wentz wore out his welcome with the Colts in short order. These rumors didn’t die down after Indianapolis dealt Wentz to the Washington Commanders for a pretty huge haul.

“Some grew frustrated at what they deemed a lack of leadership, a resistance to hard coaching and a reckless style of play, which had a role in several close losses this year.”

Sure trading Wentz one year after giving up a first-round pick for him stinks. But it became rather clear that he was not the answer in Indianapolis after a late-season meltdown resulted in the team missing out on the playoffs. Even without a firm replacement in place, ridding themselves of Wentz has to be seen as a win.

We knew that the Chargers were going to be active players during NFL free agency. They were among the teams with the most cap room and are working from a position of advantage with a starting quarterback in Justin Herbert playing under his rookie deal.

The Chargers first utilized this cap room to sign impending free agent Mike Williams to a three-year, $60 million extension. And out of nowhere, Chargers general manager Tom Telesco pulled off a blockbuster trade for stud edge rusher Khalil Mack. He did so by giving up very little in return.

To help combat the likes of Russell Wilson and Patrick Mahomes in the AFC West, Los Angeles now has one of the best pass-rush tandems in the entire NFL.

Pror to an injury plagued 2021 campaign, Mack had registered 117 quarterback hits, 81 tackles for loss, 66.5 sacks and 22 forced fumbles from 2015-20. Meanwhile, all Joey Bosa has done throughout his six-year NFL career is record 129 quarterback hits and 58 sacks while earning four Pro Bowl appearances. That’s an insane pairing.

For pretty much the entire time spanning their decision to hire Nathaniel Hackett to the acquistion of Russell Wilson in a blockbuster trade, the Broncos were linked to Aaron Rodgers. It made perfect sense given Hackett’s relationship with Rodgers dating back to their time together with the Green Bay Packers.

Once Rodgers opted to remain with the Packers on a three-year, $150 million extension, Denver quickly pivoted to Wilson. Within the matter of an hour or so, general manager George Paton had pulled off a blockbuster trade for Wilson.

This was not anywhere near an overpay for the Broncos. They landed a future first ballot Hall of Famer who is still in the prime of his career. In the process, Denver ended its existence in quarterback purgatory.