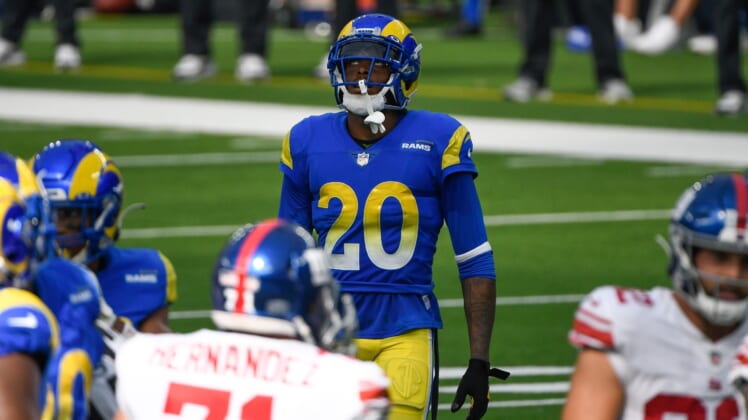 Los Angeles Rams cornerback Jalen Ramsey will be paying the price for his post-game fight with New York Giants receiver Golden Tate, receiving a massive fine from the NFL.

A few days after Ramsey found Tate at midfield following the Rams’ Week 4 victory over New York, the NFL dished out a sizable financial penalty for the All-Pro cornerback.

Even before the Rams and Giants took the field in Week 4, many were expecting theatrics from Ramsey and Tate. The star cornerback previously dated Tate’s sister and is the father of two children with her, but left her for another woman. Unsurprisingly, Tate hasn’t said nice things about Ramsey since.

Ramsey took out his frustrations early, delivering a huge hit to Tate and driving him into the ground. It would prove to be the first in a long, physical battle between the two veterans.

Following the Rams’ victory, Ramsey sought out Tate at midfield as players from both teams met and exchanged pleasantries. Once he found him, the first punch was thrown and chaos broke out with everyone trying to end the fight.

Even after the two were separated, the hostility lingered. Ramsey reportedly still wanted to fight Tate nearly an hour later, waiting outside the Giants’ locker room.

The NFL has finally handed down its discipline for the ugly post-game incident. According to Chris Mortensen, Ramsey was fined $15,625 for his role in the fight. However, Tate will avoid any discipline in a sign that he was just defending himself.

Ramsey knew he would face discipline before he threw the punch. The 25-year-old wasn’t deterred by any potential fine from the NFL, especially since he recently signed a record-breaking contract extension.

Needless to say, this fine is a slap on the wrist for Ramsey. The Giants won’t face the Rams again this season, but we’ve got a feeling this won’t be the last time Ramsey and Tate clash.