NFL: Michael Crabtree, Aqib Talib got two games to ‘get their attention’ 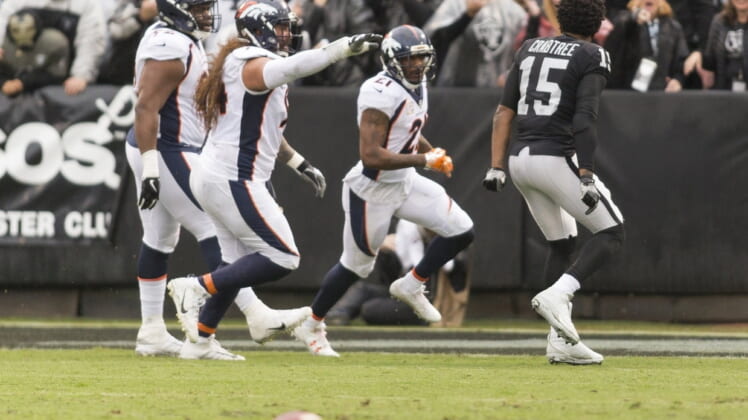 Michael Crabtree and Aqib Talib both were suspended two games for doing essentially the same thing A.J. Green and Jalen Ramsey did earlier this year. Yet Green and Ramsey weren’t even suspended, which has sparked a lot of conversation about this particular case of NFL discipline.

Oakland Raiders head coach Jack Del Rio made this point on Twitter Monday night after the league’s discipline was handed down, saying it’s “Hard to understand the reasoning for this judgement” based on Green and Ramsey not getting a single game for their brawl.

Discussing the suspension on Tuesday in a conference call with reporters, NFL spokesman Joe Lockhart made it clear the league’s discipline had a dual purpose.

“I think a two-game suspension is designed to both discipline appropriately a player, and also get their attention,” Lockhart said, per Scott Bair of NBC Bay Area. “I expect this has gotten their attention.”

The reason the NFL is so intent on getting their attention is that Talib and Crabtree’s fight Sunday in Oakland wasn’t a one-time deal. The two of them have a beef that goes back to last season when Talib ripped Crabtree’s chain off him during a game (watch here).

Heading into Sunday’s game, Crabtree knew Talib might try to do it again and even taped his chain to his body. Yet one play after Crabtree sucker-punched Chris Harris, Talib got the chain off him anyway following the receiver instigating a confrontation on the sideline. This led to the brawl that got both players, and Raiders lineman Gabe Jackson, ejected.

So, this is a bit more than a couple of guys who just got into it with one another in the heat of the moment. This was a case of two guys who came into Sunday’s game with a dispute from last season and carried it to the next level.

Much like what we see in MLB when two teams have a history of beaning one another, this was the NFL making sure Crabtree, Talib, the Raiders and Broncos don’t continue this feud any longer. And that makes perfect sense.