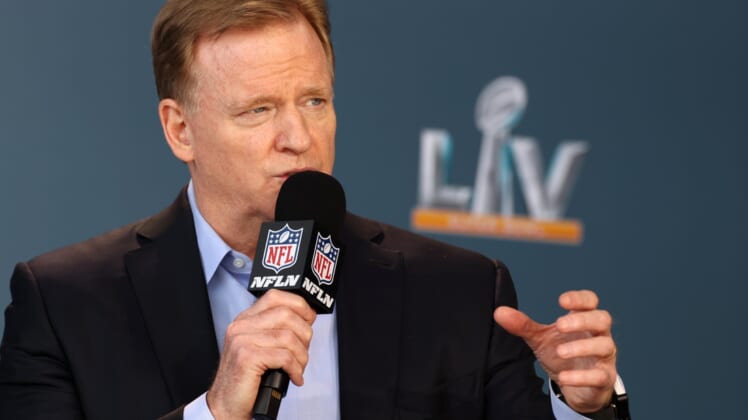 The NFL on Tuesday issued a memo to all team personnel that announced the league’s plans to move forward with COVID-19 vaccination education and accessibility and encouraged all players and staff to get vaccinated.

ESPN broke news of the memo, which came from NFL commissioner Roger Goodell, John Mara, chair of the league’s executive committee, and John York, chair of NFL’s health and safety committee. It was addressed to all team chief executives, presidents, general managers and head coaches.

“In light of expanded vaccine eligibility, it is appropriate now to take further steps to educate about and promote vaccine availability and acceptance within the NFL,” said the statement, which outlined a five-point plan for teams to implement the new league guidelines.

Steps include using each team stadium or training facility as a vaccination site for club staff, players and eligible family members; scheduling and participating in vaccine information session for staff, players and family; educating employees and promoting communications regarding the benefits of vaccination; and weekly reporting of the number of employees who have been vaccinated.

The memo goes on to say that the league is “actively discussing with the NFLPA a set of protocol changes that would apply to clubs where vaccination levels reach a certain threshold and would give vaccinated individuals significant relief from requirements relating to testing, PPE use, physical distancing, travel and other subjects.”

The league does address exceptions for individuals who forego the vaccine based on “bona fide medical or religious ground,” but notes that any staff member who refuses vaccinations without such reasons will be restricted from “football only” areas and may not work directly or in close proximity to players.

Less than two weeks ago, Goodell said he anticipated packed stadiums across the league when play resumes this fall.

“All of us in the NFL want to see every one of our fans back,” Goodell said. “Football is simply not the same without the fans and we expect to have full stadiums in the 2021 season.”

One of the faces of the league, Seattle Seahawks quarterback Russell Wilson, is on board with vaccination education. He and his wife, entertainer Ciara, will host “Roll Up Your Sleeves,” a TV special aimed at raising awareness about vaccinations against COVID-19.

It is scheduled to air Sunday at 7 p.m. ET on NBC.

The Centers for Disease Control and Prevention reported Tuesday that 36.4 percent of Americans 18 and older have received one dose of the vaccine, with 22.3 percent fully vaccinated with two doses.