Spygate 2.0? NFL investigating how a Miami Dolphins practice got uploaded to social media, but Mike McDaniel’s way ahead of everyone 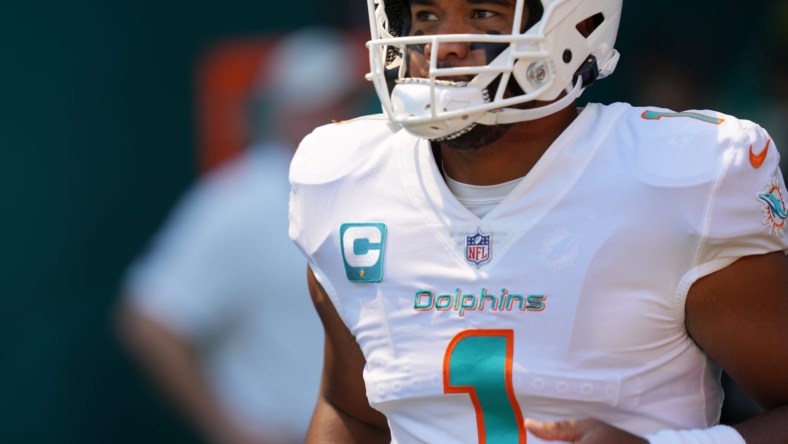 Update: This story has grown legs. Scroll to the bottom section for the latest on how Miami Dolphins head coach Mike McDaniel combatted this supposed practice film leak.

It wouldn’t be the NFL if we didn’t have some drama before a primetime game, right? The Miami Dolphins, currently 3-0, are one of the best stories in the early part of the 2022-23 football season. First-year head coach Mike McDaniel has his offense humming, and Tua Tagovailoa has become a bonafide MVP candidate while leading the league in both adjusted yards per attempt and QBR.

The Dolphins currently rank eighth in scoring and 16th in points allowed and are in first place of the AFC East, with their best start to a season since 2018. The addition of Tyreek Hill seems to be working wonders, as he ranks third in the NFL in receiving yards, and his fellow receiver Jaylen Waddle ranks second.

While some are surprised, others may be wondering just how the Dolphins have been so successful early on. Apparently, we’re not the only ones curious.

At some point on Wednesday, a video surfaced on the internet of various Dolphins practice clips caught on film. The video was shared on social media several times, including on Barstool Sports Twitter. The Dolphins even requested that the video be taken down, but Barstool Sports founder Dave Portnoy refused.

Later, the NFL revealed they were investigating the matter, as the practice took place in Cincinnati, and the league was curious if there was any wrongdoing. While no one is accusing Cincinnati of doing anything, the league wanted to know for sure.

Now the gig is up, as NFL spokesman Brian McCarthy has declared there to be “no suspicion of a competitive violation being committed by any team,” meaning the Bengals and everyone else are off the hook. No harm, no foul.

Miami’s next matchup comes on Thursday Night Football as they take on the defending AFC Champion Cincinnati Bengals, who stand just 1-2 so far. Undoubtedly a crucial matchup for both teams, it’s not hard to argue that this is a must-win game for the Bengals, as opposed to the Dolphins, who can probably afford to let one slip in comparison to their Week 4 foes.

At this point, it would be shocking if the Bengals have not caught word of the incident, perhaps giving them a chance to scout their opponent’s preparation ahead of their Thursday matchup.

Obviously, this would be a very serious matter, and the NFL has its own history with practices being filmed and shared, such as the big Spygate incident in 2007 with the New England Patriots, which resulted in the franchise being stripped of a first-round pick.

We’re far too early in the process to start pointing fingers, and that’s likely why the NFL is now conducting an investigation. It seems incredibly unlikely that anyone affiliated with the Bengals would be not only stupid enough to film another team’s practice but also dumb enough to post it online for all to see. Chances are, this was just some passionate Bengals fan hoping to give their team and maybe a few other AFC contenders an edge.

If it was a member of the Bengals organization, wouldn’t they be far more likely to just hand the footage to the team instead of uploading it online? Color us skeptical that anyone, other than maybe a crazed fanatic, will be found guilty of any wrongdoing. But it’s still a situation that bears watching. Especially if the Dolphins start to slip over the next few weeks.

Update involves Mike McDaniel being one step ahead, as usual

Well, here’s a fascinating and funny turn of events. Coach Mike McDaniel is a sly dog. According to the coach himself, the Dolphins actually happened to realize there were some secret spies in attendance, so they figured, let’s have some fun.

People may not have even noticed (we certainly didn’t), but those clips circulating of the Dolphins practicing their plays? They have one fatal flaw. Each play has 12 players instead of 11 on the field, meaning the tape that is out there is virtually worthless.

The Dolphins realized what was happening, so they threw a few curveballs in. Not a bad way to still get a few physical and mental reps in an uncompromising situation. Let’s hope the Bengals didn’t stay up all night watching those clips on Twitter.