Despite being a couple of months into NFL free agency, superstar tight end Rob Gronkowski is still available on the open market. When or if he finally decides to sign with a team for the 2022 season, one NFL insider believes there is a very “likely” destination for the 11-year veteran.

Rob Gronkowski is a bit of an enigmatic individual. He stunned the NFL world in 2019 when he retired from the sport at the height of his powers and in the middle of his prime. He ran the decision back a year later just so he could once again play with his football bestie Tom Brady, and help the Tampa Bay Buccaneers win a second Super Bowl title in 2020.

Now, with a couple of months to go before the physical preparation for next season really starts to rev up for the league’s 32 teams, Gronkowski is still an unemployed NFL star. In March, he suggested he would be interested in playing with Joe Burrow and the Super Bowl LVI losing Cincinnatti Bengals. Last month he claimed he wasn’t quite ready to commit to playing football this year.

There is one most ‘likely” Rob Gronkowski landing spot

Understanding the unique individual that Gronkowski is, Tampa Bay Buccaneers general manager Jason Licht let it be known last week that he was willing to be patient and wait for his starting tight end for the last two seasons to decide his plans for this year. That wait could be pretty long, considering that Gronkowski said just a few days ago said he felt he only needed “two weeks” to get in NFL shape and be ready for the season.

Whenever a decision does come, The Athletic’s Buccaneers writer Greg Auman believes there is a probable destination for the four-time All-Pro. In a Thursday column, he wrote that it “still feels more likely” that Gronkowski will return to Tampa Bay for a third season, based on his intel from the organization. 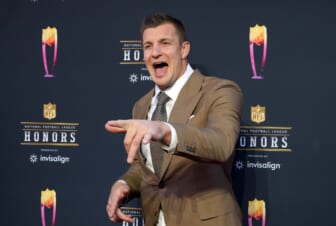 The move seems logical and would be the easiest fit the longer Gronkowski prefers to live his best life as an NFL free agent. Plus, the team recently opened up some much-needed salary cap after restructuring the contract of franchise quarterback Tom Brady.