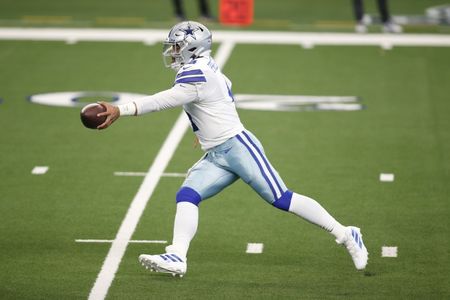 Dallas Cowboys quarterback Dak Prescott underwent surgery on his right ankle Sunday night after suffering a compound fracture and dislocation during his team’s 37-34 win at home against the New York Giants and will miss the rest of the season.

Prescott sustained the injury in the third quarter after gaining 9 yards on a called quarterback draw and getting tackled by safety Logan Ryan. He immediately clutched his right lower leg. After a cast was placed on the leg, Prescott appeared to be crying as he was carted off the field at AT&T Stadium in Arlington, Texas.

Among the people who came near Prescott while he was being attended to on the turf was New York Giants offensive coordinator Jason Garrett, the former coach of the Cowboys.

The 27-year-old Prescott entered the game leading the NFL in completions (137), attempts (201) and passing yards (1,690). After the injury, veteran Andy Dalton replaced Prescott and led the Cowboys on the game-winning drive that ended with a walk-off field goal.

–Kansas City guard Kelechi Osemele left the field on a cart during the first quarter of the Chiefs’ home loss to the Las Vegas Raiders, and coach Andy Reid said the 31-year-old tore tendons in both knees.

He was replaced by Mike Remmers, a veteran who made 14 starts for the New York Giants last season.

The Chiefs signed Osemele to a 1-year deal during the offseason. He started all five games this season and has made 101 career starts in nine seasons with the Baltimore Ravens, the then-Oakland Raiders, New York Jets and Kansas City.

A two-time Pro Bowl selection playing his first season in Kansas City, Osemele was injured blocking on a Patrick Mahomes scramble, and was not hit on the play.

The Chiefs also lost receiver Sammy Watkins to a hamstring injury in the second quarter. Watkins had two catches for 24 yards and a score.

–Arizona Cardinals linebacker Chandler Jones suffered a biceps injury against the Jets in New York, and coach Kliff Kingsbury said the team fears the injury will be season-ending.

Jones has one sack this season after collecting a career-high 19 last season. He has 97 sacks across eight-plus seasons, the most in the NFL since New England drafted him in the first round in 2012.

–Washington quarterback Kyle Allen, starting in place of struggling Dwayne Haskins, sustained an arm injury late in the first half of his team’s 30-10 home loss to the Los Angeles Rams and did not return. Allen’s exit meant Alex Smith played in a game for the first time since he sustained a compound fracture of his right tibia and fibula during a game in November 2018.

Allen, who took a hard shot from Rams cornerback Jalen Ramsey as he was trying to run out of bounds, was cleared to return in the second half, Washington announced. But the club stayed with Smith the rest of the way. Washington coach Ron Rivera said Allen will start next Sunday versus the host Giants if he’s healthy.

–Cincinnati Bengals defensive tackle D.J. Reader sustained a left leg injury during his club’s 27-3 loss to the host Baltimore Ravens, with multiple outlets reporting the injury was to Reader’s quad (though the Bengals announced it was a knee injury shortly after he was carted off the field in the third quarter). Bengals coach Zac Taylor said after the contest that he had no updates to offer.

Also, longtime Cincinnati wideout A.J. Green suffered a hamstring injury in the contest. The 10-year veteran didn’t have a catch and was targeted once before departing.

–The game between the host Pittsburgh Steelers and Philadelphia Eagles saw three starting offensive linemen fail to finish the game, as the Eagles lost tackle Lane Johnson to an ankle injury and the Steelers lost guard David DeCastro to an abdominal injury and center Maurkice Pouncey injured his foot. Steelers receiver Diontae Johnson also went down, sustaining a back injury on a punt return.

After the game, Steelers coach Mike Tomlin said Johnson may be available next week while he was unsure on DeCastro and Pouncey.

–Giants linebacker Lorenzo Carter injured his Achilles tendon less than four minutes into the game on a non-contact play. He was carted off the field and did not return, though no additional information on his injury was made available.