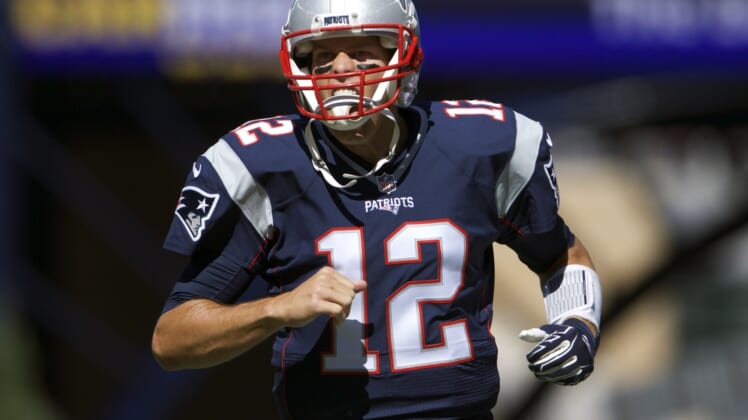 There is a ton of money to be spent as teams gear up for NFL free agency, and it’s going to be one of the wildest years in recent memory.

With top quarterbacks like Tom Brady and Philip Rivers looking for new homes, this spring is setting up to be one for the record books. Looking ahead to March 18, when teams can officially sign free agents, we’re expecting to see some big surprises take place.

With that in mind, here’s a bold look at what may happen when NFL free agency kicks off later this month.

It sure seems like Jerry Jones and Co. made a big mistake prioritizing Ezekiel Elliott over Amari Cooper and Dak Prescott. Assuming the proposed CBA is ratified by the players next week, the ‘Boys will only be able to tag one player, and that’s absolutely going to be the quarterback. That means Amari Cooper will hit the open market.

The Philadelphia Eagles have a desperate need for a dynamic receiver to bolster Carson Wentz and the passing game. They’d love to double down on their good fortune by taking a key player away from a divisional rival.

The New York Giants aren’t afraid to pay top dollar for overpriced free agents. They are also reportedly set on using free agency to bolster their pass rush, per ESPN. The market this offseason isn’t exactly brimming with top options because most top edge rushers are expected to be hit with the franchise tag.

Despite Clowney’s injury history, he’s the best option out there. And when he’s healthy, he’s dominant. With that in mind, we’re predicting Big Blue takes another big chance in free agency hoping to give its defense a big boost in 2020.

There’s so much talk about Tom Brady replacing Derek Carr as the Raiders move to Las Vegas. But we’re not buying that smoke. Instead, it seems far more likely that Jon Gruden and general manager Mike Mayock (who did a phenomenal job in Year 1) will look to bolster their pathetic defense by adding the top cornerback in free agency this year.

Jones coming to Vegas would be a tremendous boost for a defense that does have some key young players like Johnathan Abram and Trayvon Mullen, who are both set to enter their second year. He won’t come cheap and will almost certainly set a new market for cornerbacks in the NFL. But the Raiders need to make a splash as they move into their new stadium. This would certainly qualify.

The logical move for the Patriots in free agency is to simply bring back Tom Brady and continue vying for championships. However, it sure looks like the future Hall of Famer is set on seeing what he can do by himself without Bill Belichick. His public comments on the matter have only fueled that fire.

What better way to replace one legend than with another veteran and likely Hall of Fame quarterback? Philip Rivers had his fair share of struggles last year when it came to turnovers. But this dude can still sling it all over the yard, and in New England he’ll have more support behind him with a top defense (bolstered by the mind of Belichick), and offensive coordinator Josh McDaniels.

We recently dove into the idea that it’s time for the Seattle Seahawks to finally unleash Russell Wilson and make him — rather than the run game — the focal point of the offense. The key to that scenario playing out to a successful conclusion is giving Wilson reliable weapons in the passing game, which is something the team has struggled to do.

Adding D.K. Metcalf was an important first step last year. As a rookie, he was tremendous. Bringing in a hungry Dez Bryant, who’s looking absolutely phenomenal training for his return to the NFL, would be a low-risk deal that could lead to huge rewards.

The Tennessee Titans want Ryan Tannehill back, but all signs, including his own words on the subject, point to him testing the market. Enter the Tampa Bay Buccaneers. Head coach Bruce Arians has repeatedly ripped Jameis Winston over his penchant for turnovers, and the latest reports indicate he’s not coming back.

Tannehill, on the other hand, has shown the ability to make smart decisions, and he loves to push the ball downfield — a staple in Arians’ passing attack. There’s plenty of speculation that Rivers or Tom Brady could go to Tampa Bay this offseason. But Tannehill makes a lot of sense, too.

The Chicago Bears absolutely have to sign a veteran to compete with Mitchell Trubisky, who looks like he could be a huge bust. The buzz coming out of the Windy City is that the Bears intend on doing just that.

When it comes to pure arm talent and the ability to distribute the ball all over the field, Winston is elite. At the very least, the quarterback competition between him and Trubisky would be one of the most entertaining stories of the summer around the NFL. If Winston can somehow cut down on his turnovers and takes to Matt Nagy’s tutorship, he could find new life in Chicago.

The Indianapolis Colts are still reeling from the sudden and shocking retirement of Andrew Luck last summer. They had no other choice but to give backup Jacoby Brissett a short-term extension and put their faith in him, but he struggled during his first full season as a starter in the NFL. Owner Jim Irsay is used to having an elite quarterback on his roster. Bringing Tom Brady on board just makes too much sense.

The Colts have something to offer Brady, too. First and foremost, they are a playoff team with him on the roster. Secondly, they’d give him a chance to take it to his old coach in New England come playoff time due to that fact. Additionally, the Colts have some good receivers on the roster, a rock-solid tight end in Jack Doyle (who’s thrive with Brady), a dedicated run game to support him, and a good defensive core.

This move would shift the balance of power in the highly competitive AFC, and it would be thrilling theater.