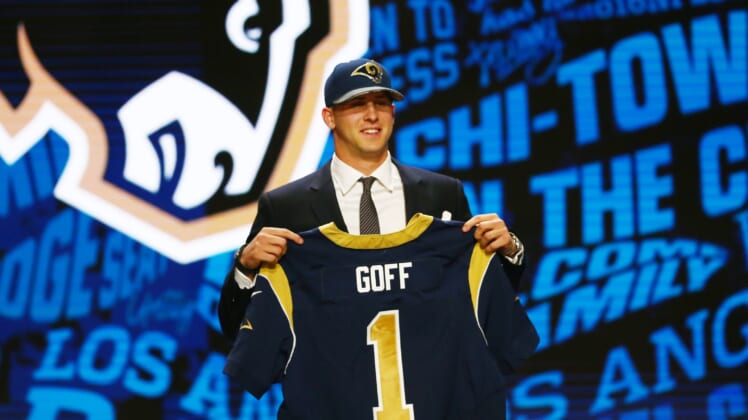 After an emotionally charged evening in Chicago Thursday night for the first round of the 2016 NFL Draft, 31 new rookies had been selected as the newest members of the NFL.

As we can imagine, there were some amazing rookie reactions, and celebrities, fans and new teammates got into the action as well.

These were the best social media reactions to the first round of the 2016 NFL Draft.

From one #1 Pick to another, @JaredGoff16 I know you will turn the @RamsNFL around and lead us to the Super Bowl!

Leave it to former Cowboys back DeMarco Murray to be the first to make contact.

Ezekiel Elliott said no Cowboys have reached out to him yet but DeMarco Murray did call and say he'll enjoy playing in Dallas for Garrett.

Eli Apple loses No. 13 to Odell Beckham and explains how he’ll get used to hating the Eagles

#Giants – #Eli Apple on what it means to be a #NewYorkGiant! #GiantsDraft: Read more on https://t.co/O93CtDtZOW

Follow along as @JalenRamsey goes to @EverBankField for the 1st time as a Jaguar.

Cover your ears Eli Apple, the perfect fit for the Giants is Vernon Hargreaves

Hopefully, he has Ryan Tannehill’s back as well — literally and figuratively.

“He texted me yesterday. That’s a sign he already has my back.”

The Browns getting help for Robert Griffin III in Corey Coleman

Browns' HC Hue Jackson on 1st-round pick Corey Coleman: "This guy’s arrow is just going to go through the roof.”

Condolences to Corey Coleman, that man had a family?

The ultimate in flattery for new Detroit Lion Taylor Decker

Can the NFL handle another Cam Newton-like mobile threat in Paxton Lynch?

The only one not smiling is Mark Sanchez.

#PaxtonLynch is a rare athlete for a QB. #DEN will give him the Cam Newton run package, because he can do it: https://t.co/iRnjYCyTbB

It’s hugs all around to welcomes Robert Nkemdiche

This guy will make Arizona’s defense even scarier.