The Dallas Cowboys are coming off a statement win and seem poised to go on a deep playoff run with an elite offense and one of the best NFL defenses in 2021. But it seems many league executives still aren’t buying into Dallas as a potential Super Bowl contender.

Dallas dominated the Washington Football Team on Sunday Night Football in Week 16, delivering a statement 56-14 victory and securing the NFC East crown. While the blowout captured the attention of football fans and players, it seems league officials weren’t quite as impressed.

During an appearance on ESPN’s “Get Up”, NFL insider Jeremy Fowler shared that many executives don’t believe Dallas is a legitimate Super Bowl threat.

“I like Dallas’ chances to make some noise in the playoffs, but when I ask execs around the league, the words ‘fringe contender’ come up a lot.”

It certainly comes as a surprise. While Dallas isn’t atop the NFL standings, sitting a game back of the Green Bay Packers for the NFC’s No. 1 seed and a first-round bye, the stats indicate the Cowboys are a Super Bowl contender.

Dallas enters January atop Football Outsiders Team DVOA ratings and its defense is leading the way. It’s been even more impressive as of late, holding opposing quarterbacks to 181.5 passing yards per game with 10 interceptions and 13 sacks since Week 6.

There are many similarities between the 2021 Cowboys and the 2020 Tampa Bay Buccaneers. The Bucs excelled at generating pressure and creating takeaways late in the season, leading the way to a Super Bowl celebration. If Dak Prescott keeps playing at an elite level and Dallas avoids a major injury, it could go on a similar run. 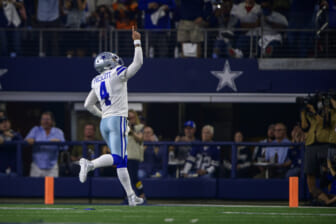 Also Read:
Why the Dallas Cowboys should be the Super Bowl favorites