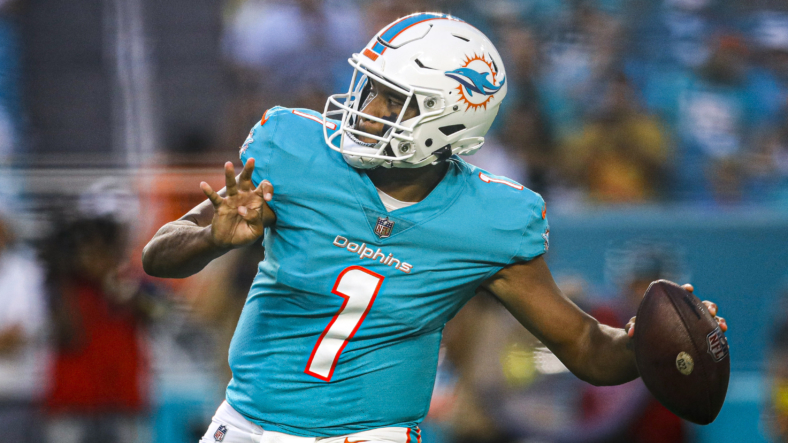 Three years ago, NFL fanbases led the ‘Tank for Tua Tagovailoa’ campaigns, hoping their woeful franchises would position themselves to take the next highly anticipated quarterback prospect who had a chance to be special at the next level.

After dominating the SEC at Alabama, Tagovailoa’s final college season didn’t go the way he liked as he suffered a severe hip injury that ultimately ate into his NFL draft preparation. When the 2020 NFL Draft rolled around, Tagovailoa didn’t go No. 1 overall, or second. In fact, he wasn’t even the first quarterback taken. That honor of course did belong to the draft’s top selection, Joe Burrow, who’s only gone on to become a superstar overnight.

Instead, Tagovailoa ‘slipped’ down to the fifth overall spot before the Miami Dolphins bought into his potential. It hasn’t helped that Justin Herbert went just one pick later to the Los Angeles Chargers.

As the NFL has seen Burrow and Herbert become top-ten quarterbacks, Tagovailoa hasn’t even proven himself to be among the NFL’s top 20 starters.

But the Dolphins have put together a roster they feel is ready to compete right now. After missing the playoffs a season ago, a lot of that growth and development is expected to come from the 24-year-old Tagovailoa. If he can’t show he’s capable of leading a top-20 offensive unit, Tagovailoa’s days of swimming with the ‘Phins may not extend into a fourth year.

However, many NFL executives don’t believe those dark thoughts will come into play. Not this season or any time soon. Instead, they feel Tagovailoa is in for a breakout season, one that could even culminate in the signal-caller taking home Most Improved Player honors with a strong season.

Related: How Tua Tagovailoa can change his narrative with the Miami Dolphins in 2022

It’s not that Tagovailoa has necessarily been bad for the Dolphins in his 21 NFL starts, but yet he’s far from reaching Burrow or Herbert status. Some think that’s simply a product of what the franchise has put around him and who he has had to throw to.

Those excuses go out the window after adding Tyreek Hill to a core that also features Jaylen Waddle and Mike Gesicki, plus having a bonafide bookend in Terron Armstead should give him more time to break down the defense.

Doug Kyed of Pro Football Focus had a chance to gather intel from several current and former NFL executives, such as Rick Spielman, and they all seem to agree that Tagovailoa’s biggest opportunity to thrive is finally within his grasp.

Here’s what Spielman specifically had to say about how Tua may be poised for a better campaign in 2022.

So, by simplifying the offense, asking Tagovailoa to make quicker decisions as he works to get the ball in his playmakers’ hands, Tagovailoa won’t be asked to do as much vertically. Yet, the opportunities for Hill to burn defenders deep will still be there after working the shorter, underneath routes early on. As defenders creep up trying to prevent the quick game, Waddle and Hill’s deep speed may be able to catch the coverage off-guard, as if their quickness wasn’t lethal enough.

Another NFL exec suggested Tagovailoa is “a little better than most people think”, and compared him to a Jimmy Garoppolo-type in a favorable way as a quarterback capable of leading a team deep into the postseason.

One NFC analytics exec went as far as to say they think Tagovailoa’s “expectations should be higher with a better supporting cast and a scheme that prioritizes more short/quick game passing and RPOs”. Yet they also stressed the importance of Tagovailoa being able to connect on the deep balls to Hill and others when they are there.

In the end, it will be the biggest season of Tagovailoa’s young career. How he ultimately handles it could make or break Miami’s season. By all appearances, everyone within the organization are big believers in the former Crimson Tide QB, and he also has his supporters around the league as well. Now it’s time to prove it.