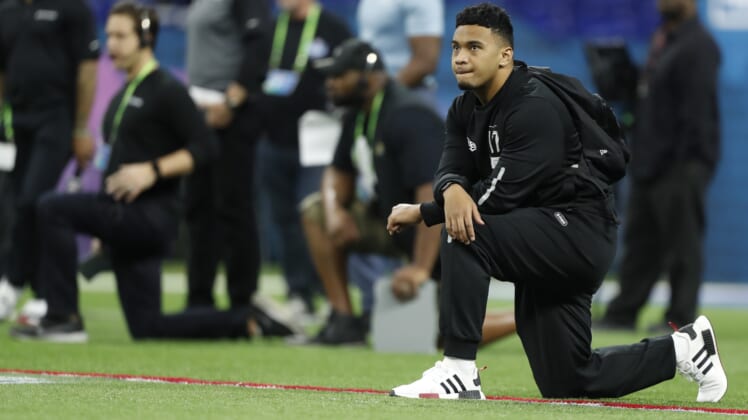 Former Alabama quarterback Tua Tagovailoa has to calm some nerves from NFL teams about his injury history with two weeks remaining until the 2020 NFL Draft.

Tua suffered a serious hip injury during his final season with the Crimson Tide. While he’s said to be 100% and should be ready for the season, some teams are not buying that.

Complicating things further is the fact that Tagovailoa is unable to meet with teams due to the ongoing COVID-19 pandemic.

In lieu of Alabama’s pro day, Tua did an extensive workout recently with 55 scripted throws, via NFL Media’s Ian Rapoport. The video will be distributed to all 32 NFL teams.

Previously considered the consensus No. 1 overall pick, that title has been taken from Tua by LSU’s Joe Burrow. There’s now a question about whether Tagovailoa will even be a top-five pick.

Recent reports suggest that the Miami Dolphins, heavily linked to Tua in the past, might favor Oregon’s Justin Herbert.

The NFL Draft starts two weeks from Thursday. This will be among the top storylines for the annual event.