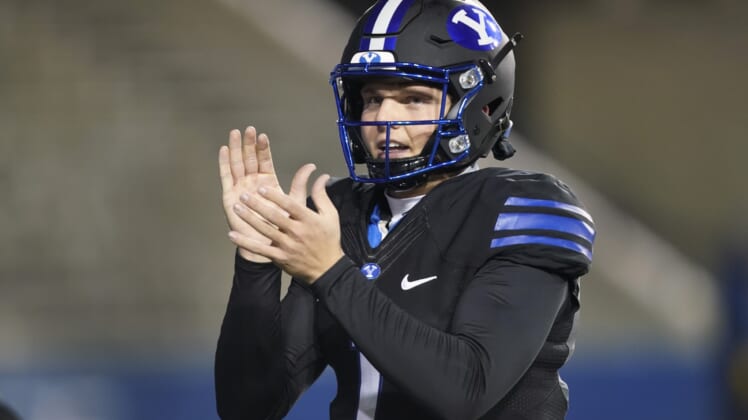 As usual, NFL Draft rumors and analysts are all over the place when it comes to grading incoming prospects. This makes sense since nobody truly “knows” which player is better than the other, but we can all speculate. Because it’s fun.

That’s now apparently the case when it comes to consensus No. 1 pick Trevor Lawrence and the fast-rising Zach Wilson, two quarterbacks who top the 2021 NFL Draft class at that position.

The latest newsworthy blurb came from former NFL quarterback Chris Simms, who now works with Pro Football Talk. While most evaluators will agree, or at least are too afraid to say otherwise, that Clemson’s Trevor Lawrence is the top quarterback prospect in the 2021 NFL Draft class, Simms has other thoughts. Specifically, he grades BYU’s Zach Wilson ahead of the player widely expected to go No. 1 overall.

While that may come as a shocking statement to many, it’s important to note that Simms isn’t the only one who’s bullish on Wilson. But more on that later. For now, here’s what the former NFL QB had to say about Wilson’s potential in the pros.

“Before it even starts, I want to say that Trevor Lawrence is awesome, there’s no doubt about it,” Simms said Tuesday on PFT Live (h/t 97.1 The Ticket). “And I’m not doing this for clickbait, stop all that crap. I have aspirations to be a GM in football. I do wanna say this – Zach Wilson is clearly the No. 1 quarterback in the draft for me. There is a separation. Zach Wilson is a really, really special football player, from every aspect and angle.

“My baseline comment with Zach Wilson is it’s Aaron Rodgers and Patrick Mahomes, OK? That’s where it starts right there. It is, an unbelievably quick release. It’s the ability to throw the ball any which way he wants – sidearm…over the top…jumping in the air two feet off the ground…throwing between a guard and a tackle 25 yards down the middle. The arm strength is phenomenal.”

Before we go too nuclear on Simms about his evaluations, (as he’s quick to point out via Twitter) he actually has had a pretty decent track record when it comes to forming opinions about QB prospects as of late. After hearing his reasoning, it’s pretty hard not to walk away convinced Wilson can be a stud in the pros. Then, there’s also the fact that he’s not the only one who thinks Wilson is a better NFL Draft prospect than Lawrence.

Fellow NFL draft expert, Matt Miller of The Draft Scout and ESPN agrees with Wilson being graded higher than Lawrence.

It’s hard to argue with either evaluator as they make solid points. How rare is it that the one everyone assumes to be the best, truly is? It wouldn’t surprise many if Wilson did become the better player over time than Lawrence is projected to be.

If the growth that Wilson showed from his sophomore to his junior season is any indicator of how high his ceiling can go, the former BYU star may very well be on his way to becoming the next superstar quarterback in the NFL.

Not only that, there are multiple teams who reportedly have Wilson ahead of Lawrence on their draft boards. But that doesn’t mean the Jacksonville Jaguars are one of them.

In this process, with them having the first pick in the 2021 NFL Draft, their draft board is really the only one that matters. If Lawrence goes first, then Wilson will likely be scooped up by the New York Jets at No. 2. The more interesting development on draft day will be when the other draftable quarterbacks find new teams.

Remember, even though the public perception regarding an incoming prospect may seem concrete, NFL scouts and evaluators within organizations don’t all use the same methods when determining a players’ potential. Each year there is a player who many people feel is taken way too high or way too low, when in reality, teams just weren’t that high on a player to begin with.

There are about a million different factors that teams consider when evaluating whether a player fits their atmosphere and where they aim to be as an organization, many teams gather information on players up until their pick is due.

While in actuality Zach Wilson probably has a slim to zero chance of being selected over Trevor Lawrence, it’s important to keep in mind that it’s pretty early in the draft evaluation process and many more stories such as this will pop up as we hear more NFL Draft rumors moving forward. We’ve officially hit smokescreen season, so don’t believe everything you hear.