As the National Football League prepares for its 2021, the league is hoping to rebound from a year that saw NFL revenue drop by $4 billion. But with fans filling stadiums once again, a new surge in the COVID-19 pandemic may create new problems.

The NFL has instituted strict safety protocols for the upcoming season, threatening forfeiture of games and paychecks if a COVID outbreak happens. Many players have criticized the league’s approach, with Cole Beasley and Jimmy Graham among the most vocal critics.

According to Pro Football Talk’s Mike Florio, the NFL won’t mandate players get vaccinated and even if the league wanted to pursue it, the NFL Players Association won’t allow it.

Do NFL players have to get vaccinated?

For the most part, the efforts made by teams to educate and vaccinate players have been successful, Entering Week 1 of the preseason, seven teams have a vaccination rate at 97 percent or higher and only one club is under 74 percent.

But the Delta variant is elevating the level of concern about another shutdown in the United States. When that happened last fall, it had significant consequences on the NFL. Games were largely played in empty stadiums, league personnel had to follow strict protocols and the salary cap plummeted. 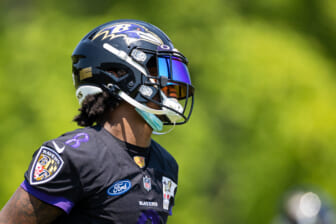 Months before training camp, teams were banking on their stadiums being at capacity this season. But the New Orleans Saints announced fans will be required to provide a vaccination card or a test confirming they are negative. Similar rules are being considered by other clubs, including the San Francisco 49ers and Green Bay Packers.

As all of this unfolds, the NFLPA is making some adjustments. The union is pushing for all players to resume daily testing and it’s possible further restrictions come.

Players don’t have to worry about mandatory vaccinations anytime soon, but that may also come at a significant financial cost if things don’t improve in the months ahead.