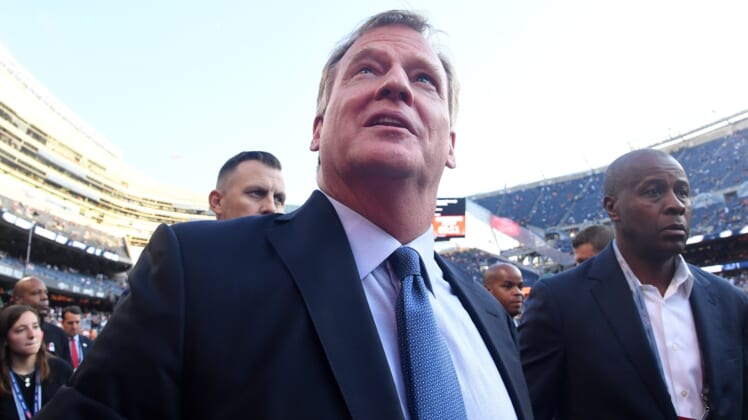 The 2020 NFL season is fast approaching and with games set to kick off in a matter of days, many teams are divided over stadium attendance during the COVID-19 pandemic.

While some clubs will have fans in the stands and others will play in empty stadiums, NFL commissioner Roger Goodell believes the competitive playing field will still be even this season.

The COVID-19 pandemic and strict social distancing guidelines have forced the NFL to make dramatic changes before the upcoming season.

Many clubs have already announced they won’t permit fans to attend any games for the early portion of the 2020 season.

Many of the league’s most prominent clubs will be playing in front of empty stadiums in Week 1, but a few others are taking their chances. Recently, the Miami Dolphins announced they will allow 13,000 fans to attend their home opener and the Dallas Cowboys will welcome people into AT&T Stadium.

It would seemingly create a competitive advantage for teams who are given permission by local health officials to permit limited stadium attendance. That may be especially true for the Kansas City Chiefs, who will have at least 12,000 fans at Arrowhead Stadium for the NFL Kickoff Game.

However, during a conference call with reporters on Tuesday, Goodell said the league believes the playing field will be even for every team.

“We do not believe it’s a competitive advantage,” Goodell said on Tuesday. “We discussed it very early on with our Competition Committee and with our clubs. We do not see that. We obviously have varying capacities across the league, and from our standpoint, we want to invite our fans in if we can do it safely and we can do it with the full support of local officials. We think our fans want to come the stadium.”

The NFL is working on ways to help its organizations that won’t have anyone in attendance when players take the field. It is finalizing an artificial crowd noise policy, per ESPN, that would allow teams to pump in fans cheering through their stadium during a game. The NFL is still trying to determine a maximum decibel level for the fake crowd noise and it will give all 32 teams, even those with fans in attendance, permission to use the audio track.

Some fans will be fortunate enough to attend NFL games this season, but the experience won’t be the same. Masks are mandatory inside all stadiums and people must follow distancing guidelines.

Unsurprisingly, this will have a drastic impact on the NFL’s revenue. The NFL could lose billions of dollars in stadium revenue and the financial toll will be staggering for teams without any fans in attendance.

The 2020 NFL season will kick off on Sept. 10 and the league is confident fans will enjoy a full season. Unfortunately, there just won’t be many fans there to witness it live.